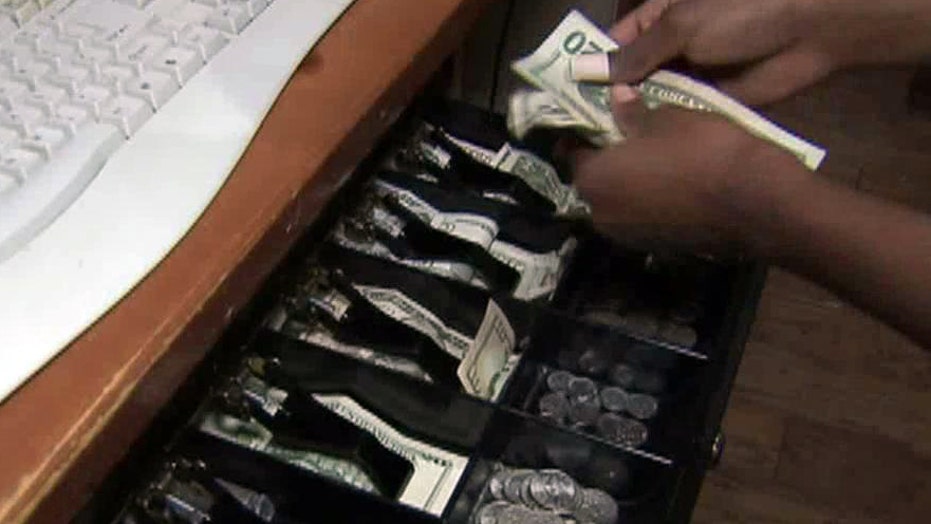 DEMOCRATS PUSHING FOR TAX HIKES AMID SIGNS ECONOMY IS SLOWING

GARY B. SMITH: What I don't understand is how you can propose tax hikes without looking at what the scholars say or what the studies say. Look, if there were studies out that said raising taxes were great for the economy, I'd get behind it. But you know what, Brenda? Every single scholarly study for the past 15 years has said one thing: Higher taxes, negatively impact growth. It's funny, forget all that, though. If you just look anecdotally, when the left wants to inhibit behavior, whether it's energy consumption or cigarette smoking or any one of the other things they have, what's the very first thing they do? They raise taxes! Yet they say in this case, raising taxes is not going to affect the economy.

SUSAN OCHS: We need to put some of the recent numbers in context. Yes, the percentage ticked up a little bit, but corporate earnings have been strong. The consumer confidence number that was out yesterday from the University of Michigan was up. The consumer expectation number from the University of Michigan for the next six months was also up. So this is not consumers pulling back from the economy. It was really more of a little blip that we saw in the fourth quarter. When that gets revised, it will get revised upward. I'm not really that worried about where we are right now.

TOBIN SMITH: If tax hikes don't affect behavior, then why is it that these corporations put all these paychecks out and bonuses, before taxes went up? Tax policy does affect behavior. We know that. I'm going back to JFK. The big issue there is that he was the one who started the ball rolling and who said clearly, "You grow the economy by growing the economy." Consumer confidence at this point - I don't buy the payroll tax as much as I say what's the next shoe going to drop? This idea of raising taxes and spending at the same time, people are starting to figure out that it doesn't add up.

JONAS MAX FERRIS: Taxes are a lot lower than they were through JFK's administration for sure. Look, I don't think anyone would argue Gary's point that when you raise taxes, you cut spending and it hurts the economy. It's a drag on the economy. You are cutting into spending the people are doing, taking it and paying off our debt. However, a bigger drag on the economy, probably the only bigger drag is when a government basically goes broke because they can't pay their debt, like what happened in Greece and Ireland and other countries that didn't have the tax base to support the spending the politicians had. If we're not going to cut the spending the taxes are going to have to go up. The question is how and how much and when. This economy still is weak. It doesn't look like it if you look at the stock market. But you can't just continue to raise taxes this year more than they already have gone up this year. We'll have to do it over like five years slowly. They're going to have to do that to close this gap. It's not going to go away through growth unless we cut spending and who's doing that?

JOHN LAYFIELD: It's the wrong message. Let's go back to when Toby was a teenager under Calvin Coolidge. He took down Woodrow Wilson's high rate of seventy-seven percent all the way down, created a huge boom. Ronald Reagan did the same thing. The democrats have railed against the Bush tax cuts. They made them permanent. And now they realize, "Oh, my goodness, we need revenue." Here is the problem. This isn't just a blip. We have structural unemployment. We have the lowest labor force participation since the early '80s.That's more than a blip. That's structural unemployment and this country is not designed to handle that. We could double, 100 percent raise taxes on Americans; we would take $1.1 trillion last year - our deficit is $1.3 trillion. We can't get there through tax increases alone. We have to deal with spending cuts and entitlements.

TOBIN SMITH: I hate to be the bearer of bad news, but for the younger person, there are no jobs - jobs are not opening up or they're not getting to go move up. For the people in the middle, they're not getting to move up and they can't change jobs because you don't have the dynamic work force. But for the older person, the bad news is they're going to be working longer and you add it all up and that is this unemployment will be staying at this number. We thought years ago the boomers would be retiring in such a way that we'd have a deficit. Now we have a surplus.

GARY B. SMITH: Near the upper end of that bracket which is hard to believe. I have no intention of retiring. I can't afford to retire. Second of all, I think a lot of people are in the position of wondering what else they're going to do with their life. Am I going to retire for the next 35 years or something? It's ridiculous. So the unfortunate thing is it becomes a supply and demand issue. You have the supply of jobs out there which is taken up by old farts like me and for my daughter, well, tough luck, unless I'm forced out I suppose. But that's going to be it. There is just not going to be enough job openings. We're not creating more jobs with this vibrant economy. And the young people kind of get the short end of the stick.

JONAS MAX FERRIS: It's not a win-win for everybody. First of all, people are living longer, they have to work longer. So people thought they could retire at 65 because their house is worth a lot more five years ago. They have to work longer, they can't retire on that. But excess labor is not bad for stocks or the economy. It means wages aren't going to take off, which means no inflation will happen because you'll have more people competing for the same job. If you want to retire early, live a long time, yeah, it stinks. It's not as good as it was when your house was worth more when you can retire earlier. But for the economy, remember when you work longer, you'll spend more, it's good all around.

JOHN LAYFIELD: We are not built for structural unemployment in this country. And that's what we were facing right now. According to bill gates, we're going to lose 20 million jobs overseas to tech engineers - what Toby was talking about for math and science degrees, which we're not producing kids out of our school that have this qualification. We have 7.9 percent unemployment. We've been at 8 percent for basically quite a very long time. And this demo shift is happening with the older generation. This is not good for unemployment going forward.

SUSAN OCHS: There are, but retirement savings is a really touchy issue. Most people don't start soon enough. They don't save enough. We're just starting to move into policies that help to support retirement, like automatic entry into an IRA or a pension program with your company, supporting child accounts and getting people started sooner. So those are really important steps. The one thing I would say about this that's maybe not so bad for the broader jobs picture is that a lot of where we lose things in the economy is in skills transfer. And when older people retire, we lose the institutional knowledge that they have and we lose their skills. If we can start to figure out ways to take these more senior workers and get them into training education capacities - that can really help the economy. So we don't wind up with those skills gaps. One of the places we're struggling in this country is nursing. We have such a shortage of skilled nurses. If we can use some of these people to help us train, it cannot necessarily be a "lose-lose" for the economy.

JOHN LAYFIELD: This is beyond stupid. This was never a good idea. Once we realized it wasn't, we should have shut it down. The reason we didn't, because the presidential election starts in Iowa and they were bought off. The way they subsidize it is ridiculous.

SUSAN OCHS: This study was sponsored by the petroleum industry. So I think we need to take it with a huge grain of salt. It doesn't prove it's hurting all engines. Toby, you're Porsche is safe. Between hurricane sandy and the drought in the Midwest, we are losing $140 billion a year in environmental issues and this is something that's real.

GARY B. SMITH: I was saying, sound like something that came right out of a central planning. Let's try this. We'll try it for everyone. Who knows how much it costs! Look, I'm completely with Susan - If we could measure any of this stuff. But the fact is - we can't. So we have this gazillion dollar project and we don't know if it's harmful or helpful. We think it's going to harm the cars, we don't know how much it's going to cost. We don't know the benefit, but I guess that's how the government works when they're spending other people's money. It's silly. We need to get off this for a while.

JONAS MAX FERRIS: It didn't come from the central planning. It came from the ethanol lobby. It's a questionable fuel from corn. It's full of subsidies. They approved the use of it by the EPA because it actually is cheaper with the subsidies, so they want to blend in to make a higher profit. It has some environmental benefits because you don't have to use lead. The bottom line is the government should just control the emissions rules and they should have a tax on regular gas. Once they start getting into the blends or cap standards, it causes winners and losers and distorts the market.

TOBIN SMITH: John's F-150 runs on biodiesel. Maybe that doesn't work because he's buying it from restaurants oil or something. But the ethanol, if you buy any engine in the United States, the warning expressly says if you use ethanol, you're not covered by the warning. What does that about the safety? It says the car companies are scared to death of the EPA and by the way, they lent them a few billion dollars, so they folded.