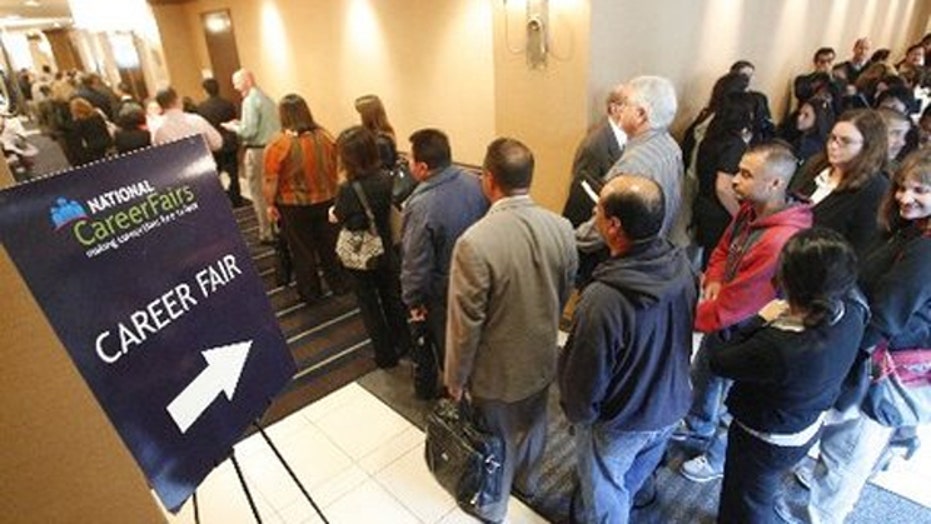 Charles Payne: You know, listen...it's about time...really, first before we start...someone in Washington needs to start reminding Americans of how great this country is. You know, every time I see this, it's like we're the eighty pound weakling. We're an amazing country, uh the last thing that's gonna hurt us is the government having some fiscal restraint. You want to talk about what's hurt us...taxes have hurt us, higher taxes on the rich, higher taxes on the regular people. No one out there wants to hear about 2 percent, how onerous this is, when the American public, the household debt is now $1.3 trillion the hard way, so it's about time...remind us how great we are.

Dagen McDowell: No, not at all. And for February and March, the jobs numbers were revised higher by a combined 114,000. There were 332,000 jobs created in February, so it shows that Democrats and Republicans, politicians will say anything, even if they know it's not true, to get what they want. Even when they don't, they're still gonna suck their thumbs about it. But I wanted to point in terms of all the policy uncertainty in the last couple years...Vanguard CEO wrote an op ed this past week in the Wall Street Journal that said $261 billion has been taken out of this economy because of uncertainty, that is $800 per person. So if that won't wake people up and get Washington to do something long run and permanent, I don't know what will.

Ben Stein: Well I agree, investors are in an extremely buoyant and upbeat mood...there's no doubt about it, we love it when that happens. But we don't know what the jobs picture would have been like without the sequestration, that is maybe there would have been even more jobs without the sequestration, and the thing that worries me, Neil, is not so much the jobs picture as the defense picture. I heard Senator McCain say that all of the heads of the uniformed services have said they cannot defend the country with the sequestration...if that's true, it's extremely serious.

Adam Lashinsky: Well, I just want to applaud Charles' optimism. I've been trying to get you to be more optimistic for months now, Charles. So, a huge pat on the back from me...Ben stole some of my thunder because we have to be statistically fair here, if the sequestration hadn't happened, maybe there would have been even greater job creation, but the point is...the economy is doing fairly well. Hooray for our economy, the sequestration has been terrible policy, and remember...many of the effects have been on furloughs, not job elimination, so those wouldn't get counted as job losses, which may partly explain these numbers.

Charles Payne: It's time to put the kibosh on this whole thing. I really think it's out. You know here's the interesting thing guys...the contradictions from the administration. They invest a lot of money into electric cars and stuff like this, but by the same token...they're talking about slowing down or fracking, so natural gas prices will go up, and we'll buy more coal. Or, how about this...how about this contradiction...you got these electric cars, but you're also pushing higher CAFE standards. People are going out, and a regular car can get 1,000 miles to a gallon, so they're not buying...I mean the whole thing is a crazy, nutty thing! Oh yeah, and this other thing called cold weather...that puts a little bit of a kibosh on it as well in my mind...it's ridiculous.

Dagen McDowell: I think there is a fixation by some in the White House by forcing Americans to drive the cars and behave the way they think that we should behave...drive the cars they want us to drive. That is the only way this new EPA regulation they're trying to push through...low sulfur gasoline...Ben and Adam can speak to it...they're from California...would make any sense. It would drive gas prices higher when we're already dealing with like $3.52 as the national average. You know what's gotta drive them crazy at the White House, the biggest boost, the biggest selling vehicles in this country are these Ford, GM, and Dodge pickup trucks, baby.

Adam Lashinsky: What, the snowstorm. I mean, I think we could have a conversation about what is the best way to approach global warming. We do not want to have a conversation about is there global warming. Well, but that's the crux of the matter, Neil, It is a warming, and the fact that there's May snowstorms doesn't change the science, it doesn't change the trends. I would say I'm not one of those environmentalists obviously. I think we need to be very careful to avoid single data points like the weather in May of 2013, or whatever the weather was when you were having that conversation. The trend is incontrovertible. Well, it is in fact, warming. And so I don't know...I don't oppose fracking, I don't know that forcing people to drive electric cars is the solution, but we do need a solution to global warming, because that's a fact.

Ben Stein: Well it's all like Orwell's "1984." If Big Brother, that is, say the environmentalists, and their pals and supporters and colleagues in the White House say there's climate change, then there's climate change. Don't worry about the data, don't worry about the fact that there are hundreds of very eminent scientists on climate change who say that climate change is A-nowhere near as bad as other guys say and B-not caused by man's activities. So, the White House simply has an ideological position on this. It's not necessarily a scientific position and it can't be changed by data, it can only be changed by political will.

Dagen McDowell: Did new dads start lactating and I didn't know about it? Why do they need 8 weeks of paternity leave? You know what...why do the men need to be at home with...the women are the ones who did all the hard work. Why do the men need 8 weeks? Anything I say beyond this will get me into trouble, but I will add Marissa Mayer....

Ben Stein: Yahoo! Does not have a shortage of talented mothers in its workforce, it has a shortage of profits and earnings. I think the attention of Ms. Mayer should be turned to getting some earnings out of that very fine company instead of getting points from the women's lobby.

Adam Lashinsky: This is very straightforward...she is trying to keep up with Google, her former employer, which offers very generous maternity and paternity benefits. Silicon Valley is a talent war, that's what she's trying to do...it's a smart move, and Dagen...the three weeks that I spent with my newborn daughter were some of the best times, the best weeks of my life. I wish it were 8 weeks, it would've made me even more loyal to my employer.

Charles Payne: Listen, I agree with Dagen, and uh...well, you know what...two weeks unless you lactate, yeah I think she's absolutely correct on that as well, and by the way, we got a couple of circuses for you too. But the bottom line...for the economy, this is nuts. She could afford it, maybe Yahoo! could afford it, but economically, let's a... two weeks max for the father.

Charles Payne: IBM is one of my never sell stocks. They just hiked their dividend, buy it on weakness.

Adam Lashinsky: The classic way to play this is with utilities...they're required to pay their dividends. XLU is a utility ETF.

Ben Stein: SDY...I love the indexes as you well know, and uh this is a good index.