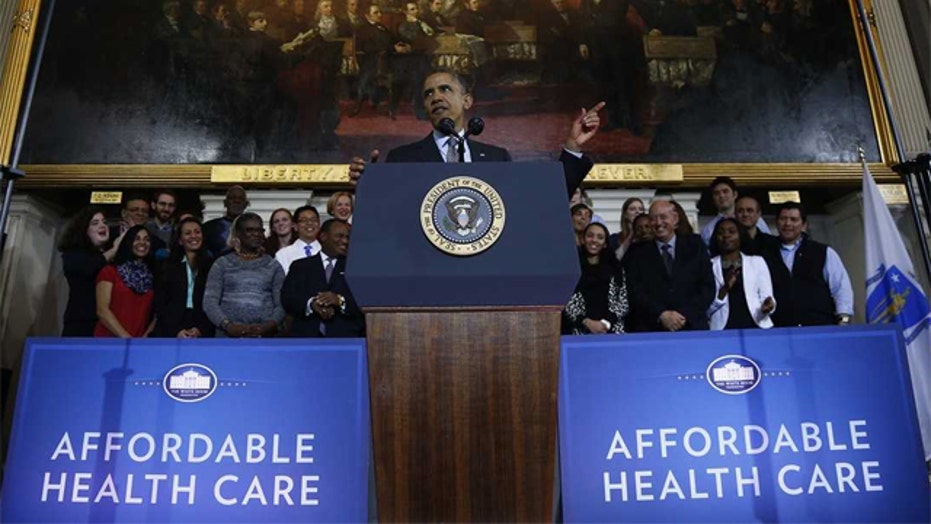 Call it the health care elephant in the room

IMPACT ON JOBS IN FOCUS WITH OBAMACARE EMPLOYER MANDATE AHEAD

GARY KALTBAUM: It is a problem and it's going to be a problem for the simple reason you add the words uncertainty and higher cost to the equation and businesses pull back. There are already surveys out there with 40 percent of businesses cutting hours or actually turning full-time employees into part-time, and it's only going to get worse as we move forward.

SANDRA SMITH: The bigger thing to look at here is the way they think that ObamaCare and this employer mandate is going to affect their business. 64 percent of business owners say that they believe that it's going to negatively impact their business, and they're not even being really specific as to why. That's part of the problem, Charles. The rules can still change and the regulations are still unknown. People still don't really know how this is going to affect their business and that's going to continue to happen, not only lowering the work force, but looking to possibly not hiring.

CHARLIE GASPARINO: I think this is going to be worse for small business. I think that's the problem. The economy is starting to show some signs of a decent pickup now. Five years after the financial crisis, finally after that entire stimulus has been pumped into the system and endless amounts of money printing, we are finally getting some decent job numbers and some decent growth. However, the elephant in the room as you said is ObamaCare. Big businesses can spread the costs over a lot of people across the globe. It's the small businesses that get screwed. They are actually hurting the one part of the economy that President Obama needs to sustain job growth going into the 2016 midterms.

ADAM LASHINSKY: What they ought to do is go ahead and make their plans and assume the mandate is coming. They should assume what the expenses are going to be and behave accordingly. Whether they're G.E. size or whether they're a mom and pop shop, they need to plan for what their future's going to look like. People will move to part-time where they can, but employers know that a full-time employee has value this a part-time employee doesn't. They need to make a decision.

SANDRA SMITH: This would merely be icing on the cake if we were to see the rest of this Keystone Pipeline unleashed. We are looking at a very barren situation for gas prices. Gasoline prices are down significantly. If you can imagine even more refining capacity with the Keystone Pipeline delivering oil to the key refineries, you're talking about substantially lower energy prices. We're seeing more oil production in the United States than we've seen in over two decades. If we can continue on this path, we could say good-bye to importing foreign oil and it would really make a much more energy independent country.

GARY KALTBAUM: The good news is we're in a bear market for prices, and that's where you should start attacking. Prices are about supply and demand, but it's also about traders and if traders recognize that something's being done and more supply's coming on, they're going to sell more. You'll see prices tank even more, and that's another big boon for the consumer.

CHARLIE GASPARINO: Half of me says if they can produce more oil, inflation will come down, they can keep printing money forever and that will be good for the stock market. The other half of me says there needs to be a conservation effort here. I don't think that the price of gasoline is way off the charts. I don't think we're suffering because of where oil is trading now. I don't think we need the supply right now.

ADAM LASHINSKY: The price of oil in the medium term is obviously coming down. We obviously are becoming energy self-efficient in the United States because of the oil boom. The large point here is if you want to take oil as low as possible, trust me that will hurt the economy. If you see oil go down to $30 or $20 a barrel, nobody will be happy with that.

SOME EXPERTS WORRY TABLETS ARE HAVING NEGATIVE IMPACT ON KIDS

GARY KALTBAUM: Go away and have a nice life and let the parents decide. The fact of the matter is some of these tablets are very kid friendly. Let them have fun and get educated.

SANDRA SMITH: I don't want the government to tell me what I can and can't put in front of my child. But, I will say I think it is disgusting that fisher-price has a seat that will hold the iPad in front of the infant's face. Their brains are sponges. They need to feel and touch things and stick them in their mouth. The government will try to get involved and will probably make a mess of the situation, but I do hate the tablet thing being in the hands of a toddler or younger. It is bad.

ADAM LASHINSKY: Sometimes the government has a role in using its position to say, "Look at this research, consider this." Sometimes it gets really important like the surgeon general's warning on cigarette smoking. When the government knows certain things there is a responsibility.