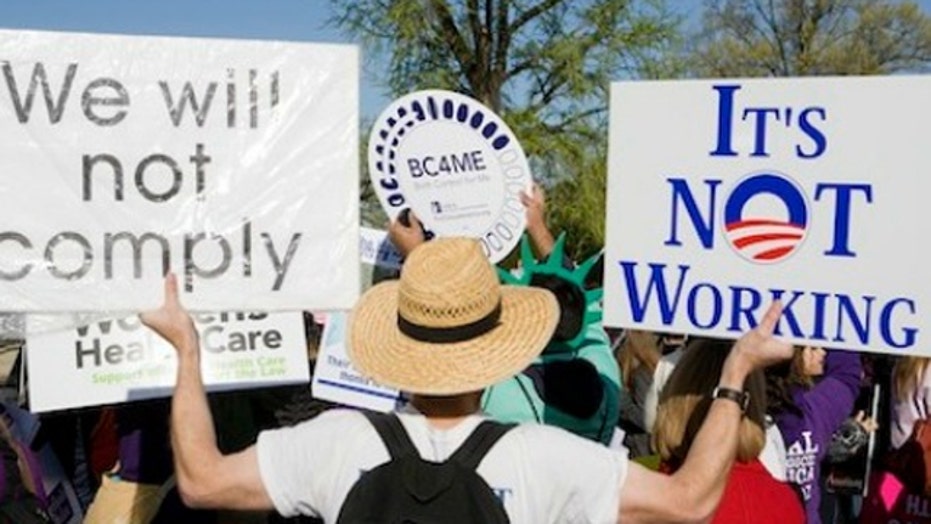 Will consumers be forced to cover costs?

DISCLAIMER: THE FOLLOWING "Cost of Freedom Recap" CONTAINS STRONG OPINIONS WHICH ARE NOT A REFLECTION OF THE OPINIONS OF FOX NEWS AND SHOULD NOT BE RELIED UPON AS INVESTMENT ADVICE WHEN MAKING PERSONAL INVESTMENT DECISIONS. IT IS FOX NEWS' POLICY THAT CONTRIBUTORS DISCLOSE POSITIONS THEY HOLD IN STOCKS THEY DISCUSS, THOUGH POSITIONS MAY CHANGE.READERS OF "Cost of Freedom Recap" MUST TAKE RESPONSIBILITY FOR THEIR OWN INVESTMENT DECISIONS.

If not enough young, uninsured Americans sign up for health care under ObamaCare, will that make everyone else's health care costs rise?

RICK UNGAR: The White House set themselves up by creating this target. I don't care if it's 10 million or 2 million, I care about the mix. If young healthy people don't come, then we have a big problem. We won't see that payoff in price increases in the next 2 years because of the risk corridor however, after that if we don't get the right insurance plan, it's a big problem.

RICH KARLGAARD: In insurance terms, it's an actuarial time bomb. The Obama administration made a key mistake because the millennials that would be 18-29 year olds supported him overwhelmingly in the last 2 elections; he assumed he would pass off higher costs to the millennials. A Harvard university poll showed that that isn't so. Only 14 percent of that age group said they would sign up and only 19 percent say they will probably sign up. So only 1/3 of healthy millennials saying they will participate in ObamaCare.

ELIZABETH MACDONALD: It was always on a wing and a prayer that the young people were going to sign up. The government will not disclose the demographics on whether or not the young people are signing up; we don't have that data yet.

JOHN TAMNY: There is no low cost insurance without healthy people so premiums will go up. The problem is that neither republicans nor democrats understand what insurance is. It's supposed to be for the catastrophic, the totally unexpected, and if you want to make that kind of health insurance universal, it would be simple and markets could provide it at a low price. Any scenario in which the government oversees this is going to be expensive because politicians want us to have insurance for routine doctor visits and that is not insurance.

MIKE OZANIAN: For young people ObamaCare is nothing more than extortion. Why would have to fine someone for not buying it. We don't fine people who don't own a car and make them have car insurance. It's ridiculous.

Proof that the less Congress does, the better off our market and economy will be

JOHN TAMNY: Stock markets love gridlock. What they don't like is when democrats and republicans are passing laws because neither party has a clue about economic growth. The stocks are at all time highs, not because of the corruption of money that is quantitative easing, but because a year ago, Obama's legislative program ended, Ben Bernanke will be out of the Fed next year and we are also seeing the total discredit of big government in the form of ObamaCare's failure. All of this is bullish for the stock markets. The two are related, no legislation, great stocks.

RICK UNGAR: It's irrelevant. Anything that congress has or has not done has not affected the market. The market is up because people have nowhere else to go to make money on their money and because corporate profits are high. If congress would have been a little busier, and had gone along with infrastructure and jobs programs, you would see a real impact on the economy. No pass from me.

SABRINA SCHAEFFER: The best thing to help all Americans is a robust economy and strong jobs. The problem is, government is too often getting in the way. We can't ignore the fact that we have a $17 trillion dollar debt. The government doesn't have its own pot of gold that it is pulling from. It's taking money out of the private economy, out of the market place which is far more efficient and effective. So of course it is dragging down the economy. I am very happy that Congress has been ineffective this year.

KASHMIR HILL: I don't think congress has been bad for us because we needed legislation to reign in the NSA and its snooping. It has been unsettling for consumers in the U.S. and abroad and bad for American businesses especially here in Silicon Valley. Companies that do internet infrastructure like Cisco have reported a slump in sales abroad. Analysts predict that the U.S. cloud computing industry will lose anywhere from $22 billion to $180 billion over the next 3 years because their customers abroad are uncomfortable trusting these U.S. companies.

STEVE FORBES: When congress undoes bottlenecks, they inadvertently create new bottle necks. It's not so much the number of bills congress passes, but what they actually pass. They can have 300 innocuous bills and you get one Dodd-Frank or ObamaCare and you have really done harm to the economy. It's not just congress that passes laws; regulatory agencies are passing laws as well. To make sure they aren't overruled, the Obama administration is starting to pack the courts starting in Washington D.C. The EPA, the labor department, the NLRB ObamaCare and Dodd-Frank, numerous laws coming in. Congress is almost an irrelevant agency.

RICH KARLGAARD: The makeup of the Presidency in congress and the senate today is similar to the way it was after the 1994 elections. The late 90s did very well for the stock markets. Yes, John Tamny is right about gridlock.

STEVE FORBES: Absolutely, it's not just Britain, numerous other countries have done it as well and the post office actually has some real assets. They have real estate, over funded pension fund, made some great strides and efficiencies. If congress got out of the way, and it was truly privatized, they would do great things. As for universal service, UPS and FEDEX reach virtually every mailing address in this country and if you have a really remote area, you can do the equivalent of a village post office or a local store that can provide essential postal services as well.

RICK UNGAR: I agree that it is out of step with the times but I don't think we are ready quite yet, too many remote places that would have a problem. There are things in development. There is a company called Zoombox that I have seen that can replace what the post office is doing, we aren't quite there yet.

MIKE OZANIAN: Its work rules are outdated too. As far as remote areas, having to pay more, it seems fair to me because out in Wyoming and places like that, they pay a lot less for their homes and their land, so this would equal everything out.

ELIZABETH MACDONALD: Get the government out of the way of the U.S. Post Office. Even the post office says that they want to open up shops in shopping malls and drug stores. You're right about the union costs for the benefits, that's a big thing. They are privatizing in Europe, Canada, Asia, New Zealand Japan, it seems like a worldwide phenomenon.

SABRINA SCHAEFFER: One of the problems is that the post offices has tried to trim personnel and cut back on hours but are limited in their ability to modernize based on Congress. Unfortunately unlike the private market place where you fail to adapt, you will go out of business, we have a company that is sputtering along. We should get government out of the way so they can do what they want to do.