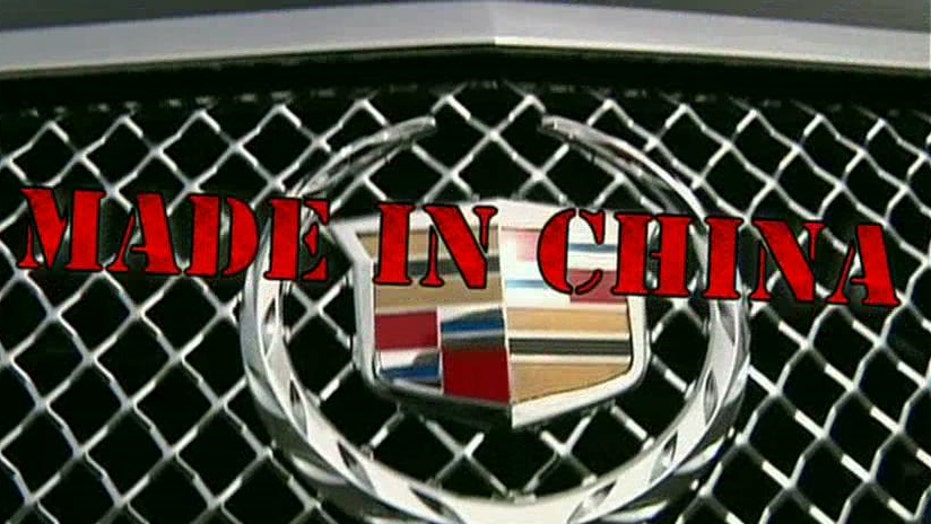 IN FOCUS: GM spending $1.3B to build plant in China to make Cadillacs

ELIZABETH MACDONALD: I'm not an anti-free trade Luddite and neither are you. What we are talking about is a politicized bailout. What is happening here is that China gets the jobs, and we are stuck with the tax payer vanity projects like the Chevy volt and no jobs here. I'm all for GM building in China, I don't have a problem with that. This was a political bailout, they were not allowed to restructure and get Toyota or a Korean company to buy GM in a bankruptcy and make an even healthier so they avoid having to do a bailout. GM still owes us $20 billion.

RICH KARLGAARD: I share your outrage about the bailout, but we have to move forward. The Chinese luxury car market is the largest in the world believe it or not. It's only getting bigger. The Cadillac escalade, the SUV, is the highest profit margin personal vehicle that GM sells, to sell the highest profit margin product into the largest luxury car market is an opportunity for GM that cannot be passed up. It's in everyone's best interest shareholders, employees, the US government, taxpayers, for GM to be successful. This helps them be successful.

BILL BALDWIN: I think sadly this is an opening chapter in a grand plot to move all of its manufacturing someday to low wage countries. It's a shame given that a lot of other US manufacturers are going the other way. They are bringing jobs back to the US to take advantage of low energy prices, better automation and proximity to our markets. GM seems to be going the other way.

MIKE OZANIAN: Bailouts are bad, profits are good. If GM is going to be more profitable by manufacturing in China, that's where they should build them. It will attract more capital, help them be more profitable, and in the long run it will help them hire more people. This is a good thing if it is successful in increasing profits.

RICK UNGAR: To the extent that they are not making cars over there to export to the US, to the extent that it is going to lower their cost to manufacture in China, I can understand this. In order to do business in China you also have to partner up with a Chinese company. If we see them start to manufacture there to ship cars back to the US, you're going to find me on your side.

RICH KARLGAARD: This is the age of Twitter and Facebook. I think what McDonalds did is mildly heroic and I applaud it. I'm glad when a company of McDonald's size goes on the aggressive tack and takes opportunistic chances like this. In terms of Charles Ramsey is a flawed person, maybe this is his salvation. Maybe he will look at himself differently and fall back into a life of crime. I think this is wonderful for everyone.

RICK UNGAR: I think we call people heroes a little too easily these days. Listen, I have no problem with McDonalds congratulating him online. If I had been their marketing consultant I would have left off that last sentence because it does invite the kind of blow back they are getting. Do it slowly, do it carefully, then take the photos down the road with you doing something for Charles Ramsey. It would have been a better way to market this, they are just asking for trouble.

SABRINA SCHAEFFER: Wheaties is the breakfast of champions and now maybe McDonalds is the lunch of heroes. I think this is good news for McDonalds. I agree that Charles Ramsey is a flawed human being and all of us are. This was a moment of bravery and something he should be praised for; he saved the lives of several people. This is something that if McDonalds think this is good for their brand is someone they want to profile, good for them.

MIKE OZANIAN: We don't know how this will work out and it is very risky when a company or individual attaches himself to a tragic situation. I think if President Obama when he surrounded himself with the families of the school children who were murdered in Connecticut, so it would help him get his legislation passed on guns and it failed. He took a lot of heat from that so there is a lot of risk attached with this as well.

ELIZABETH MACDONALD: I think it's fine, I'm just glad that Mr. Ramsey didn't say he was paying his Exxon-Mobil heating bill and Exxon tweet about it because Rick Ungar may have had a mild transient stroke over that one, I'm just kidding. This is just a tweet, basically McDonalds is not saying 'we are going to make a commercial built on kidnapping' and I like how we blast CEOs and companies for not being socially conscientious, and now McDonalds put out a tiny little tweet, it's not as if McDonalds poured cyanide into the ocean, it's just a tweet.

BILL BALDWIN: I didn't think it would take long for it to boomerang on McDonalds. First of all, it was revelation that it wasn't just the hero but the apparent perpetrator of this crime who loves McDonalds. Secondly, Charles Ramsey, who is rambling at his discourse on TV, has had a lot of negativity in it. Talking about domestic violence and 9/11, does McDonalds want its brand associated with that kind of stuff?

RICH KARLGAARD: I think so, unemployment is still close to 8 percent, I think for a government entity, to kind of sow the seeds of discord and dissent, between employers and employees, I think is a terrible thing to do. Employers are dying for talented, committed people. Here is a copy of the poster, I circled the stuff that was very anti-employer, and here is the stuff that speaks on the employers behalf, it's so lopsided it's ridiculous.

RICK UNGAR: I thought Rich's comment was perfect because it highlights how wrong this decision was. None of this decision was based on anything that Rich pointed out. It was based on freedom of speech argument so you know what that means? That means, you know that little poster if you walk into a washroom at a restaurant that reminds employees they must wash their hands? Well you know what if you own a restaurant; this is violating your free speech. So you can take that poster down. Personally, I don't want to eat there. It was a ridiculous decision; I think the most pro-business Supreme Court in our history will strike it down.

SABRINA SCHAEFFER: I think this was good for jobs, and you know what else it's good for? It's good to change the narrative. We talk about unions being a small counter wave to big business, big mean business, but the reality is the public knows differently. I think this is responding to public unhappiness with public and private sector unions. Gallup found a few months ago that 42 percent of Americans want to see unions have less influence and I think this ruling reflects that very well.

MIKE OZANIAN: This is very good for jobs because companies in the private sector that are not unionized are much more profitable and grow faster and hire more people than private companies that are unionized.

ELIZABETH MACDONALD: I agree with Rich, this poster really is lop- siding in favor of unions. It does not tell the worker and it really hides it from the worker that they have the right to refuse to pay union dues in right-to-work states. They have the right to decertify a union if they don't want a bad union representing them. I think this is a plus for workers to get the best information they deserve in the workplace.