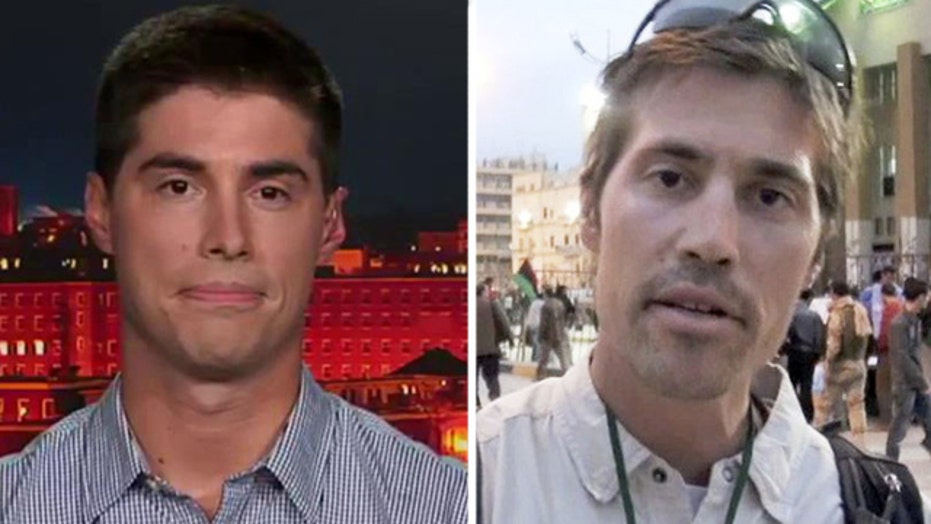 Michael Foley says he is 'appalled' by the administration's approach

This is a rush transcript from "The Kelly File," September 11, 2014. This copy may not be in its final form and may be updated.

PRESIDENT BARACK OBAMA: When people harm Americans anywhere, we do what's necessary to see that justice is done. The people of Syria, whose story James Foley told did not deserve to live under the shadow of the tyrant or terrorists.

MEGYN KELLY, HOST: Well, that was President Obama, on August 20th speaking during his vacation about the murder of American journalist James Foley at the hands of ISIS terrorist. While he promised justice, he did not offer any kind of plan. He then left that speech and drove straight to the golf course. Over the next few weeks another American, Steven Sotloff was beheaded. More atrocities were committed, and the president's poll numbers began to plummet, as support for a military intervention built right here in the United States. And last night we heard a very different message vowing to destroy and degrade these terrorists with a series of military actions. Joining us now to react in a ‘Kelly File' exclusive Michael Foley, the brother of James Foley. Michael, thank you so much for being here with us tonight. And I appreciate it in particular on a day like this, 9/11 when you and your family have been directly affected by the war on terror that began 13 years ago today. I wanna ask you, your brother...

MICHAEL FOLEY, BROTHER OF JAMES FOLEY: Yeah, thanks for having me.

KELLY: Your brother, Jim went to Syria in an act of courage to cover the barbarism there and ultimately became a victim of it. The president last night vowed a military campaign. But my question to you is whether it came too late.

KELLY: When you sat and listened to the president last night, you know, talk about how a core principle of his presidency is if you threaten America you will find no safe haven and heard him outline his plan. What were your thoughts?

FOLEY: It didn't sound like much of a plan to me. I mean, I understand why maybe certain details they don't go into. But I -- but I would have liked to seen a little more involved strategy that includes a plan to institutionalize change there and stabilize the region.

KELLY: I know your family has been somewhat upset with how the administration handled James case, obviously and your family over the course of it.

KELLY: And I'm wondering whether you feel that you were well supported. Because I know that, you know, when we made the prisoner swap with the five Taliban generals for Bowe Bergdahl, a man who is accused to being a deserter of the U.S. Army, the president came out and said the policy is no man left behind, and he expanded that even to civilians saying no Americans unjustly detained should be left behind either. And wondering if you feel, he and the administration did all they could to get Jim back.

FOLEY: No, no. We're appalled by the situation. You know, it went past not doing everything they could into -- they were actually in a penance they got in our way. And that's what really you know, bothers me to the core. You know, we were -- I was specifically threatened by the Department of State about, you know, raising funds towards, you know, ransom demands for my brother. You know, we were smart enough to look past it, but it slowed us down, we lost a lot of time trying to regroup.

FOLEY: Exactly. My parents believed strongly, family, friends, we started a foundation it's freejamesfoley.org, it's called the James W. Foley Legacy Foundation. And it's aimed at assisting hostages and families of hostages, you know, with navigating this web, you know, fostering communication between nations, there was really no sharing of information. In fact, you know when we tried to get information from other allies even, you know, we were stonewalled. So it's a huge gap.

KELLY: Michael, you know, the whole country was so horrified by the video of what happened to Jim. And you know, obviously no one more so than your family, and it's actually played a major role in the president's announcement last night. I mean, the latest Fox News poll showed 65 percent of the American public believes that the United States should take the lead in going after the killers of your brother. Did you watch the video?

FOLEY: I did. I watched an unedited version of the video, I felt I had to. Jim's death means so much more than, you know, a catalyst for some of the U.S. action, but at least there is some comfort in that. Certainly with the kind of semi alone moment and clearly, you know, has pushed our administration to act. But the video just struck me to the core that this -- the evil this group has, I just can't wrap my mind around that. Jim was such a good person. I wish I could even come close to his approach to life.

He really, really cared about the disadvantage his entire career from teaching in inner city Phoenix, to working with mothers towards their GED's in Chicago and, you know, all his work in the Middle East to bring light to the atrocities there. It was just a circumstance, an ending that I could have never imagined.

KELLY: You know, I know Pope Francis actually said that his death was an act of martyrdom, and his legacy that he leaves behind is that courage and that willingness to stand up in the face of barbarism and try to shine a light on it, which many journalists were too afraid to do. Michael, all the best to you and your family. Thank you so much for being here with us tonight.

KELLY: He's such a sweet man. He described himself as a proud American. And said he didn't want to be negative, you know, he just wants the world to remember his brother, and he's obviously very concerned about our foreign policy today. Again, the James W. Foley Foundation seeks to help the families of hostages. That is freejamesfoley.org.