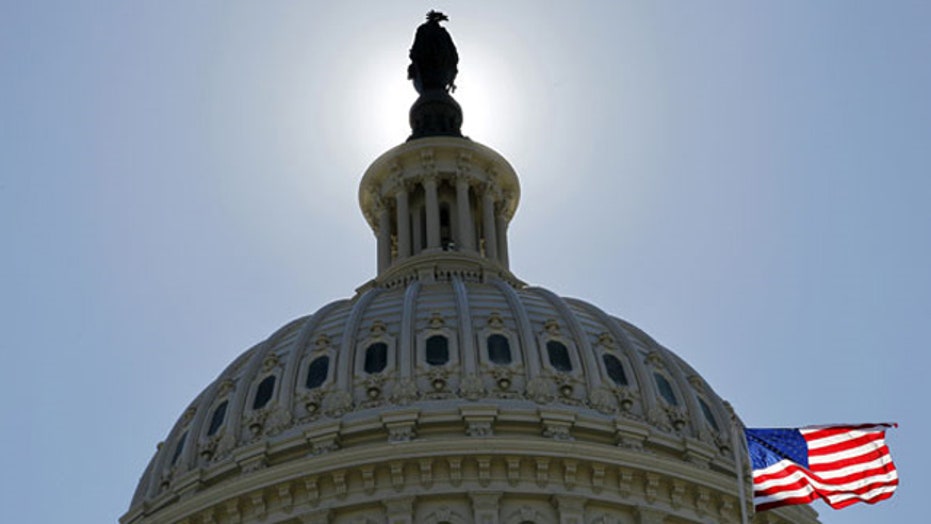 'Era of Big Government' is back?

JOHN TAMNY: I think it's important to cut welfare benefits, not out of cruelty, but out of compassion. There is nothing more life-affirming than having a job and if you know that the government is going to send you a check either way, there is less urgency on a rainy day or a bad day to go out and find a job or adjust your wage demands to new realities. Welfare services are work-deterrent and its anti-economic growth after that.

ELIZABETH MACDONALD: I don't like what the administration is doing in terms of all these band aids because it is their job policies and economic policies that is really a check on the job growth in the United States. Don't cut food stamps, what about the single mom with a child? She needs food stamps. Food stamps have dropped the poverty rate since 1967, the CBO has confirmed that, as economic studies. Cut things like ethanol subsidies and the $200B in waste, fraud and abuse and duplication in the U.S. government and the fraud in the food stamp program itself.

RICH KARLGAARD: I think it's tragic but we have high unemployment and employers are feeling very cautious and that is what is tragic about this environment. The economy isn't producing the kind of jobs it normally does. It will be nearly 5 years since the recession ended and we have these abysmal figures. Economic growth should be at 4%, but it is still at 2.5-3%. It makes a huge difference. I would concentrate on pro-growth policies that get unemployment down to 5%, and then look at welfare reform.

RICK UNGAR: John ignores the fact that so much of the food stamp budget is going to people who do have a job and can't earn enough money to feed their families even going to work. What about that?

MIKE OZANIAN: This started with George Bush. He doubled spending on food stamps, and under president Obama it has increased 95%. You have to look at both of those president's spending because what we have is stagnant wages for the middle class. We have the lowest labor participation rate in 50 years. We number of people not participating in the labor market, either with a job, or looking for a job that is normally what we see at a recessionary level. You need some incentives in the marketplace if you want a capitalistic economy.

STEVE FORBES: You aren't going to get real food stamp or welfare reform if you don't get this economy moving again, which means simplifying the tax code, reducing tax rates, stabilizing the dollar, getting rid of Obamacare and bringing in market-oriented healthcare system and effective safety nets. Then you would see this economy take off.

RICK UNGAR: This rule has been in existence for 30 years for companies that self-insure. They have been following this for a long time. I see Steve's point but on the other hand, we have seen companies along the way that didn't behave as they should.

MIKE OZANIAN: For someone in Washington to think that they have any notion whatsoever on how much they think someone should be paid at a private company exhibits an enormous amount of arrogance. Most of them have that arrogance and they want ever-more power. It's baffling that the public buys into this in any degree. They know nothing about it whether it is for the CEO or whether it's for a low-end employee earning minimum wage. They are clueless when it comes to market forces they should stay out of it.

SABRINA SCHAEFFER: This goes beyond healthcare. This is the problem with any kind of mandated benefits. One of the things we want in the workforce is flexibility, that employees can find a job that best fits their needs and employers aren't burdened with costs that they can't afford. When the government steps in and mandates whether its healthcare benefits or paid leave, all of these limit flexibility and choice and the ability for employers and employees the ability to negotiate appropriate contracts.

ELIZABETH MACDONALD: This is like having a pay czar at the IRS because the IRS has to enforce this. The IRS has to define who is highly compensated and what rich benefits are. This is lunatic complexity from the government as they are defining "utopian" benefits that no one can afford in health reform.

RICH KARLGAARD: Every person in a company has a key person policy where you take care of the people who are vital for the future of your company. The insurance companies themselves, who are providing these key persons insurance, are going to require that they get a higher level of healthcare. Doesn't it make sense for the Broncos to give Peyton Manning a higher degree of healthcare than say the person who washes the uniforms?

IRS NOW ACCUSED OF TARGETING A CONSERVATIVE GROUP IN HOLLYWOOD

SABRINA SCHAEFFER: It's becoming part of a larger trend where it is acceptable and encouraged to attack conservatives, anyone who questions government overreach. We see this with the war on women, with the IRS targeting; and we saw this with Dinesh D'Souza recently. It's unfortunate because we are a big country with different values and perspectives. The idea that the government is getting in there and pinning Americans against one another through the IRS is something that is horrible.

RICK UNGAR: We don't know that it is targeting because they are a new organization filing for the first time for their 501C3. They are supposed to be investigating applications like these.

STEVE FORBES: We saw it in the McCarthy era that even if you brought people to the theatre they went after you and you got black balled. It's a chilling effect what we see here. If you are going to get caught in the cross-hairs, a lot of people aren't going to take the risk.

JOHN TAMNY: I would be just as mad if the IRS were targeting liberal groups. To think we could reform or fix this is the triumph of hope over experience. The IRS is a politicized institution and the only fix is to abolish it.

STOCKS THAT ARE HEATING UP AS TEMPERATURES OUTSIDE ARE GOING DOWN