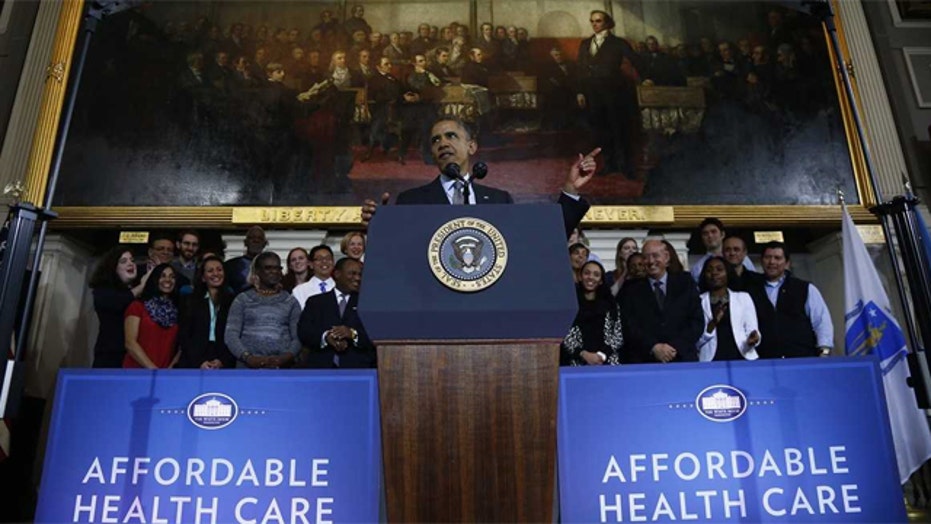 Does ObamaCare unlock job lock or lock up hiring?

CBO ON OBAMACARE: MAY CUT FULL-TIME WORKFORCE BY 2.5M

GARY B. SMITH: I want to hit on two things we just saw in the clip. The one senator or congressman, I can't remember which, said, "Okay, some people have more time to spend more time with their kids." That's all well and good, but when the government is involved you can't create something from nothing. In order for those people to spend more time with their kids, their premiums have to be subsidized. Who are they subsidized by? By everyone else who's still working and paying out there, normally in the form of higher taxes. So if I'm one of those people, what happens to me? I have to pay more taxes. Then what happens? I have to work harder. Some people benefit, but a lot of other people are penalized. Normally, the people are penalized more than they benefit. The other point I want to hit on is the one senator made the point about labor force participation. Basically, he said it's going to drop. Is that the direction we want to go?

JEHMU GREEN: Absolutely, this is good for workers. It's good for workers, families, and it's good for the economy. I want to dismiss what the politicians are saying and focus on what the director of the Congressional Budget Office is saying, it is a change in the labor supply, not a change in the number of jobs available in the economy. Douglas Elmadoor says very clearly, this is going to decrease unemployment and lead to higher wages. Yes, it's not a good thing to be stuck in the job just for health insurance coverage. What about all those entrepreneurs who want to start their own businesses or find a better job? This could not be better news.

JOHN LAYFIELD: When you have a pig, you can put lipstick on it, but it still doesn't make it a beauty queen. They're saying this will help the job market. Look, if your best answer is this easing job lock, creating jobs or to open up jobs, it's the same as when they had the idea, let's tell companies that have cash on the balance sheet to hire people they don't need. We don't have any job growth in this country. The jobs number was okay yesterday. It wasn't great. It wasn't terrible, but we've lost 1 million jobs since President Obama took office. What we need is jobs here right now.

JONAS MAX FERRIS: I'm kind of between this, because in the CBO report, they say there is substantial uncertainty. This is a new way of being, like if you are 63 and you normally couldn't afford health insurance without working at a company that provides it, would you quit the job preemptively for retirement? Maybe, we don't really know. I like to think everybody's not going to run out of work because they get subsidized health care. On the other hand, I don't think you should have to have a job to be able to have health care. I think you should have to have a job to not be in poverty and get a paycheck. Your employer should provide you a paycheck, but if you got pre-existing conditions and you can't afford health insurance, you shouldn't have to get a job to solve that problem. That is a separate problem than needing money to not be poor, which is what a job is supposed to provide.

TRACY BYRNES: I think it's the wrong way. You don't want to change the labor force because of health care; you want to change it because of innovation and entrepreneurialship. We're not seeing health care offered to a lot of people because they're part-time consultants now. Nobody wants to take on these people; they are still uncertain how it will affect their bottom line. That's less jobs in the economy. We are backing into it in all the wrong ways. The fact that the Democrats are trying to spin that it's good to work less is so beyond what our forefathers wanted for this country.

JOHN LAYFIELD: I this the biggest threat to America right now, besides for some isolated terror incidents are cyber terrorism. Look, we are the only super power along our allies to controls all four oceans. Because of our geographical location, the odds of a military invading us are very small. However, you look at something like the virus that infiltrated the nuclear facility in Iran that was very closely guarded and helped to melt that nuclear facility. That same thing could happen very easily here. One of the hackers in the Target probe was supposedly a 17-year-old in St. Petersburg, Russia. We are very vulnerable as far as our entire electric grid and very much more to cyber terrorism.

JEHMU GREEN: I agree with John our power grid is extremely vulnerable. Engineers give our grid a D-plus. It has grown ten-fold in the past 50 years. It's barely been modernized, just a bunch of patchworks fixes here and there. This is why we need big, big infrastructure spending. This is an area where we should have agreement from liberals and conservatives. Infrastructure investments are exactly what are needed to protect us from these types of attacks and to get our grid into the 21st century.

GARY B. SMITH: I happen to agree with Jehmu in this case. Although, I don't think Obama has said specifically infrastructure spending to re-establish or re-ignite the power grid. He is talking about these shovel-ready projects that have never been shovel-ready. The big point is the power outage from Hurricane Sandy alone cost $52 billion to the GDP. That's $52 billion. So if you wanted to stage an attack on the U.S. Forget about 9-11, as horrific that was, attack our power grid. Imagine without electricity or air conditioning for weeks on end like the poor people that went through Sandy did. It would be horrible. Spread that across the U.S., It would be devastating to our economy.

TRACY BYRNES: We don't even have the stuff in the USA to replace the parts anymore. It all comes from China. We should be even more worried that if a transformer blows or something like that, we've got to go overseas to get it. We're just inviting cyber attacks to our company at this point. It's that antiquated. We have got to revamp this thing.

JONAS MAX FERRIS: You know, these points are right but they will lead us down this path where the government is either going to regulate security at power plants or they will take it over like they did the airlines. Private property doesn't need protection from the government. These companies lost millions of dollars in the attack. If we saw five attacks like this, then all the power companies are going to start putting walls around these power plants. It will raise prices for consumers. It doesn't require the government to come in with arbitrary rules and security measures because that won't work very well and more importantly, it's a free market solution. They're not protecting our lives from foreign invaders, that's what you need the government for. Domestic terrorism on private property can be handled by the people that own that private property in most cases.

TRACY BYRNES: Look, life is not fair. These kids deserve pizza, man. They stayed in. They studied. They got As. I don't understand why we have to give everyone everything all the time. Why does everyone need a medal in Little League? People win, people lose, and that is what these kids need to learn.

JONAS MAX FERRIS: Great idea. It's called instant gratification. My stock pick last week on the show was up double digits on Friday, therefore, I get pizza, and nobody else gets pizza. That's fair. If I have to wait until the end of the year to get rewarded, that's too long. We can't wait until we get jobs later; this is how we do it.

GARY B. SMITH: I don't like it at all. Maybe no one else on this panel actually went to middle school and got good grades, but I did. I can tell you, the last thing I want to do is go to a party with the other nerds in the school. It's like a party for the one-percenters. I'll be there with the other nerdy guys and everybody that got "A"s, and the school bully who got "F"s will be waiting to beat me up because he didn't get any pizza. There are other ways to reward people. This isn't a good idea.

JOHN LAYFIELD: The problem with America right now is everybody gets a trophy no matter what. Unless the kid has a learning disability, if that's the case, put a different measure in there, reward them as such. Reward the "A" students. Not only that, but let the "B" and "C" students clean up afterwards.

JEHMU GREEN: I can't believe they're only getting pizza. They should get at least cake or something for good grades. When I was in middle school, we got a trip to Six Flags, but this is not a real life lesson, because we now have an economy where no matter how hard you work and how much productivity is up, you are not getting rewarded. Wages have stagnated, and the CEOs are keeping all to themselves.