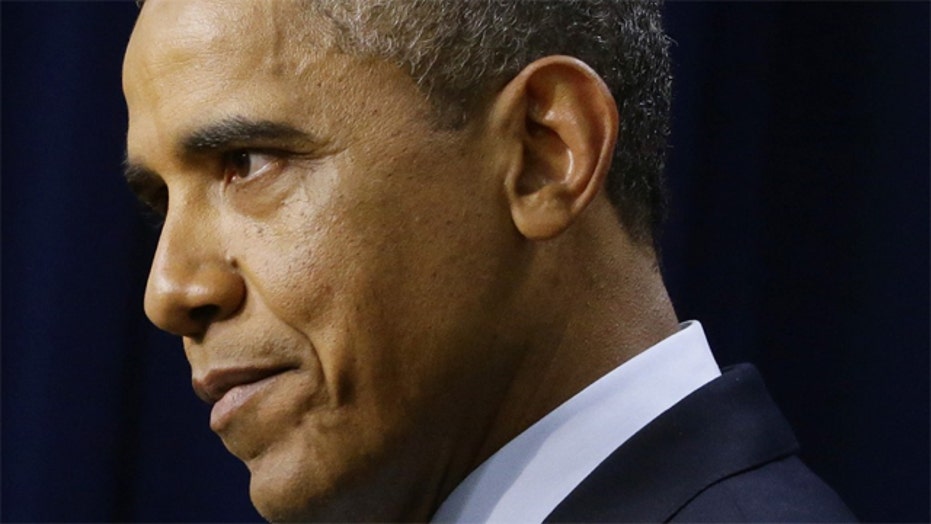 Many Americans losing their health insurance thanks to ObamaCare

HUNDREDS OF THOUSANDS OF AMERICANS REPORTEDLY LOSING HEALTH PLAN DUE TO OBAMACARE; HOW BAD WILL IT GET?

GARY B. SMITH: The bottom line is my current policy is being cancelled due to compliance with the health care law. My options for a new policy all had premiums going up at least 50 percent and the deductible's still sky high. I don't see how the young people are going to be able to afford this. This is where the whole thing sinks; the consequences are going to be horrible.

MARK HANNAH: This was anticipated all along that people would get dropped from these bad plans and the solution is that people can get an affordable high quality plan by going to the ObamaCare exchange.

JOHN LAYFIELD: It is not true that people's insurance rates will go down; you are seeing triple digit increases. According to the CBO, 16 to 20 million people are going to lose their insurance. The promises that you can keep your insurance and that premiums will go down are both lies.

JONAS MAX FERRIS: If you are healthy Obamacare might cost you more because it might make you get more expensive health care coverage than you might ordinarily want. But if you are unhealthy, this plan can save you money. For young people, there will be subsides that will substantially lower the plan.

JOHN LAYFEILD: Sen. Harry Reid has is wrong. Look at the migration out of California right now into places like Texas and Florida because people are trying to get away from these ridiculous taxes. Why would people send money down the black hole known as our federal government? They do not want to get spending under control. All they want to do is raise revenue, so they can continue to give everyone everything they ever promised them so they can be great politicians and get reelected. That mindset for our country is an absolute disaster.

MARK HANNAH: Nobody wants to pay more taxes. The only point I think he was trying to make is that most Americans don't share this Republican ideological opposition to taxes; they have more of a logical position when it comes to taxes. Nobody wants to pay more taxes, but they realize when our country is so far in the red one way we have to balance our budget is to increase revenue and decrease spending.

TRACY BYRNES: The middle class is paying for all these taxes. They're getting ripped six ways till Tuesday. It is a stupid mindset to think that taxing the rich is going to solve our problems. There is no way around it.

GARY B. SMITH: Reid was talking about everybody. Reid operates like a vast majority of Congress and a vast majority of the Obama administration under this cloud of hubris. They think deep down that they are smarter than the rest of us. They think we should give them their money and they in their benevolent ways will start up ObamaCare and startup Amtrak. I think Reid just needs to cut spending and say we are big government and we haven't figured it out.

JONAS MAX FERRIS: The majority of people voted for Democrats in the last four years and their plan to solve the debt problem by raising taxes. So I would say the majority want the minority's taxes to pay for everything.

NEARLY 22 MILLION YOUNG ADULTS NOW LIVE AT HOME WITH THEIR PARENTS WITH ONLY 10 percent PAYING RENT; TIME FOR PARENTS TO GIVE THEM SOME TOUGH LOVE?

JONAS MAX FERRIS: I understand the economy is bad for younger people, but it is improving and this figure is not improving in proportion to that which means there is something else going on here. It is because a lot of people will only work as much as their expenses require. It will be better for the economy if people go pay their rent, earn more money to do so, and get their life started.

GARY B. SMITH: My feeling is I can teach my kids lots of lessons in many other ways but the home will always be the home. I want my kids to feel they can stay there as long as they need and they will pass that along when they are married and have kids. That is the one place I draw the line between these hard real world lessons and being a parent.

TRACEY BYRNES: I am a mother and I think the kids should stay home as long as they have to. I moved home twice after graduation and thank God that my parents were there for me.

JOHN LAYFIELD: We have the lowest labor force participation rate in 35 years; we have the most poverty in our history right now. It is a good thing that these kids have the opportunity to stay with their parents.