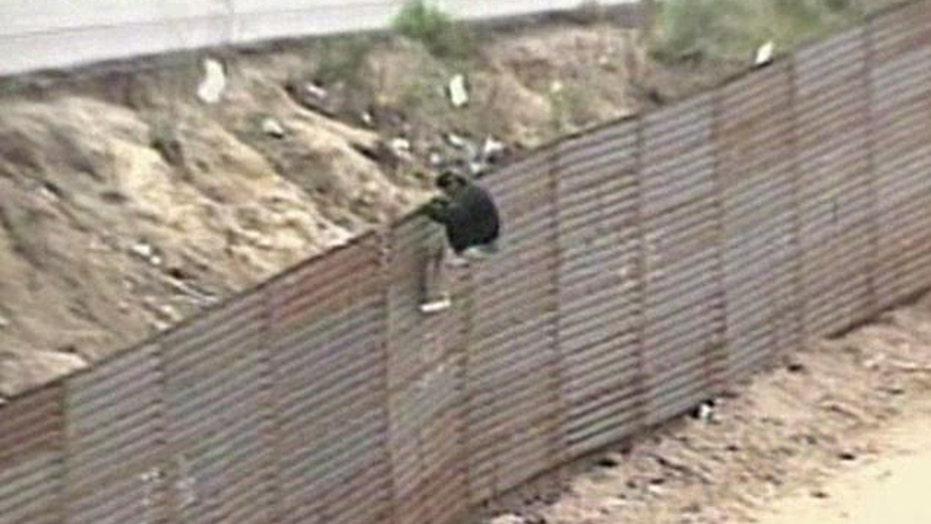 Did Boston bombers derail 'Gang of 8'?

Did Boston bombers derail 'Gang of 8'?

Charles Payne: Listen, the thing we gotta worry about, everyone watching this show has to worry about is something that's rushed, hand-fisted, wait for the fog to clear it because you're really gonna love it when you get the details kinda plan out there, and we don't need anything to score political points, but you can't push a plan through without border security being first and foremost. And I think almost every other day we learn about how awful this Obamacare thing is. So, just to put something through so both sides can say to a certain block of voters, "We like you", would be a huge mistake.

Ben Stein: Uh I a 100 percent agree with you about the political pandering to the Hispanic vote, I've never seen anything quite so explicit in my life in terms of pandering an ethnic group. It's embarrassing on behalf of both parties. I agree with that, but may I respectfully ask what is the connection between border security and the Tsarnaev brothers who came over on an airplane...they didn't slip through the border, and as far as I know, none of the terrorist suspects in any of the major terrorism in the U.S. have come slipping through the Mexican border?

Charlie Gasparino: But shouldn't it complicate it a little bit? I mean listen, I have a problem with having a welfare state and open borders. I mean that, to me, is problematic. Uh, I think Milton Friedman said it, you can't have both and pay your bills. Um, but when you add terrorism, it's another dimension...I mean listen yes...we haven't had a terrorist jump across the Rio Grande lately, or since 9/11, but it's the same sort of checks and balances that go on. I mean those guys got into the country pretty damn easy, uh people can come in from other parts of the world pretty damn easy, and you know immigration reform, when they do it, will affect not just Mexico, but it'll affect every country...anybody from any country that comes here.

Dagen McDowell: It could possibly mean going back to the drawing board, but what those Senators are trying to do is a lot more I guess...palatable than what's going on in the House because they want to address all of these things in one fell swoop, so they don't get into fight after fight after fight with interest groups. What's going on in the House...they're trying to deal with this peace meal...first you move on agricultural worker VISAs, then you move on say security checks by employers and then they push border security down the road. That's where it'll never get done.

Adam Lashinsky: Well, you know, Neil, I've found that over my many years of talking to you, that's my name dropping for this segment, is that you are almost always right on these tactical political issues, where it doesn't have anything to do with ideology, so I'm sad to hear you say that becau...and I think you're right, and the reason I say I'm sad to hear that is that I don't...pandering...we always...politics is pandering, that's like a, that's a given, but we're not rushing here, I mean we've been trying to do immigration reform since President George W. Bush tried and failed because his party wouldn't support him on this, and to connect...and so what we can say on this program because we are not politicians is that there is no connection between the Boston bombing and immigration reform. These were two legal immigrants in the United States. That's a horrible police and terrorism issue, but it has nothing whatsoever to do with the fact that we are a nation of immigrants and we want to promote legal immigration.

Who's going to pay for healthcare reform? Will it lead to a single payer system?

Dagen McDowell: Absolutely. You know, if you think Medicare looks bad, Medicare is a walk in the park to what this thing could be in terms of the complexity of it, in terms of the cost of it. Look at Senator Max Baucus who was one of the architects of this healthcare law...looks at Health and Human Services Secretary, Kathleen Sebelius, and says this is a train wreck. HHS has missed dozens of deadlines.

Charles Payne: But there's a lot we don't know. But what we do know...Draconian interpretations at what's full-time work. This is gonna destroy people, a lot of people watching this show are gonna take a 25 percent haircut because their hours are gonna go from 40 to less than 30. Uh, we do know that...a lot of state exchanges aren't prepared, so you won't have a choice. The $40 an hour interpreters to tell you that there's a platinum, gold, silver, and bronze program...that's a farse, uh and it just goes on and on. Of course, Congress will try to bail out of this.

Charlie Gasparino: Yeah, and what was scary about the debate around healthcare, I believe, is that the media didn't do enough work in talking to people like Dr. Carson. My brother's a doctor, he works in the ICU...area down in Philadelphia, and they will tell you the thing's a mess, they don't know how it's gonna happen, how it's gonna be rolled out, how it's gonna be paid for, particularly in inner cities...that's the scary part too.

Adam Lashinsky: I just think I'm disappointed with my friends...with the pessimism of my friends on this panel. You know, you people...Aw, Dagen I'm crushed to hear that, and you know that's not true. But seriously, you know, if Charlie, if you had been at the Continental Congress, you would've said we can never put these 13 colonies together, or if you had been part of the planning for WWII, you would've said this is never gonna work...fighting a global war on two fronts, these things are complicated.

Ben Stein: This is a train wreck, is putting it mildly...a train wreck into a junkyard, it's just a catastrophe. They're never going to be able to figure it out. The idea that the Congress voted on a bill that they did not...of whose contents they were unaware, is almost unbelievable. The fact that they are making the insurance companies take even the sickest customers, is gonna drive up health care costs, it's gonna be a nightmare of confusion, I feel very sad for the doctors. I feel bad for everybody, it is a nightmare.

Apple spent $100 billion on buying its stock and paying dividends

Adam Lashinsky: Well it'll work in terms of stabilizing the stock price. The good news here is they are borrowing money to pay money out in the United States that they can't repatriate because most of that money is sitting abroad.

Ben Stein: Adam is exactly right. The money would otherwise have just been stashed in the bank or else be used to build plants in China...much, much better to give it to the people of the company, the stockholders.

Charles Payne: Not much more. Listen, about a year ago, the President started railing against corporate America...you guys are just sitting on a ton of cash, I want to get re-elected, you're the bad guy, spend that money! That's when we saw this wave of buybacks and dividend increases. If the President really was honest about this, he would have given them a break, let them bring that money back. Let them bring back $400 billion, and yes, you know what...$100 billion would go back into buybacks, but we would get a stimulus of 100, 2, $300 billion that wouldn't cost anybody a nickel. It worked out pretty well...correlate the unemployment rate when that money came back under Bush when he gave that exemption, and over the next 12 to 24 months, I looked at it, the unemployment rate dropped precipitously.

Charlie Gasparino: Jeff Immelt recently was talking about all this cash on balance sheets, and he was saying, he was asked, why is it still there? And he said basically listen, we live in a post 9/11 world. We have to worry about terrorism and we have to worry about a financial crisis.

Dagen McDowell: If you're a shareholder of Apple, this is how you want them to spend the money, you do not want them making stupid acquisitions with it just to go out there and spend it like Flip when Cisco bought it, which got shutdown, which is stupid.

Adam Lashinsky: Well, I love it, but it's already way up Charles. I would look at Illinois Tool Works, which is very inexpensive and pays a generous dividend.

Ben Stein: Great company, I'm not sure what he knows that's not already in the price, but it is a great company. I like the exchange-rated fund for Taiwan. I think the Taiwanese are among the most amazing people in the world. They make everything and they make it well and inexpensively. They're a powerhouse.