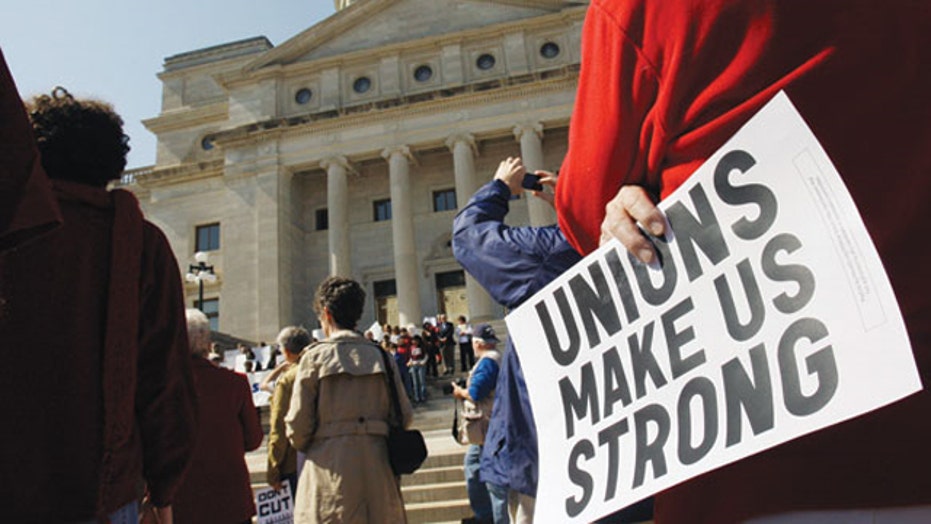 Did Big Labor deliver a big blow to ObamaCare?

CHARLES PAYNE: I think president Obama hit the unions with a big blow. The president is building this giant utopian welfare society. It's very expensive. We already have the highest corporate tax in the world, so the government needs to find the extra money from somewhere else and someone else. The unions have money, and now that the government is going after them, they don't like it.

DAGEN MCDOWELL: I think if you read this report from this union group, it says they approve of the effort to extend coverage for the under-insured and uninsured. But they don't want to have to pay for it and they don't want their health insurance to change in anyway.

CHARLIE GASPARINO: We should start an occupied movement against unions next. Listen, they get very good benefits. They make a decent amount of money. They are part of the 1 percent. If this system is going to go through, they have to pay.

ADAM LASHINSKY: Let unions object. Everybody can object. The key should be to try to make this healthcare law work better, not to tear it down.

BEN STEIN: This whole thing is a carnival side show. We don't know if climate change is real or man-made. And, certainly, no one in his right mind believes a senate all-nighter will change anything. What it's about is a diversion from real problems and also the Democrats urging the need to control people. If you ask a one-word for the Democrats, it's control. Republicans don't believe in that.

CHARLES PAYNE: The secretary of State Kerry reiterated that Climate Change is the most pressing issue in the world. Forget about Vladimir Putin, China, Syria, this is the most important issue because it's one degree higher. They want us to be afraid, because that's how you control people -- with fear. But right now people have more fear about deciding 'how the heck do I pay my rent in this economy?'

DAGEN MCDOWELL: There is a recent Gallup poll of the most important issues. Economy was first; near the bottom were climate change and the environment because jobs are more important. Instead, if you are the Obama administration you side with the green movement, with the environmentalists And you don't pass the keystone pipeline, even though the unions are for it.

CHARLIE GASPARINO: There obviously is some climate change going on, but we don't know what is causing it. Sen Markey is very liberal. This is a total waste of time to hold an all-nighter and waste the taxpayer's time and money.

ADAM LASHINSKY: We don't ask our leaders to pay attention to the issues that only rank high in the polls. We ask them to do their job. I don't fault them.

DAGEN MCDOWELL: What parent is handing the kid the phone and the child is in a position where they could make these purchases? Take the phones and mobile devices away from kids.

CHARLIE GASPARINO: I don't have kids but my 10-year-old nephew did text me the other day, which I thought was scary.

BEN STEIN: Of course it's the parents' responsibility. It's a further way for people to try to control other people's lives. It goes back to my theme: there are a lot of people who get off on controlling other people. So what if the kid does buy a few dollars' worth of stuff? It's not going to ruin most parents. If it does, then they were careless and shouldn't have left their credit card out. This is another control freak issue.

ADAM LASHINSKY: I guess I have to speak as the voice of experience. My 7-year-old asks me sweetly, "Can I buy this?" I don't know how long that sweet request is going to last. The technology companies have it in their power to prevent the price gouging. I don't know if litigation is the right way to solve this, but I'm telling you, the technology companies could control this if they tried.