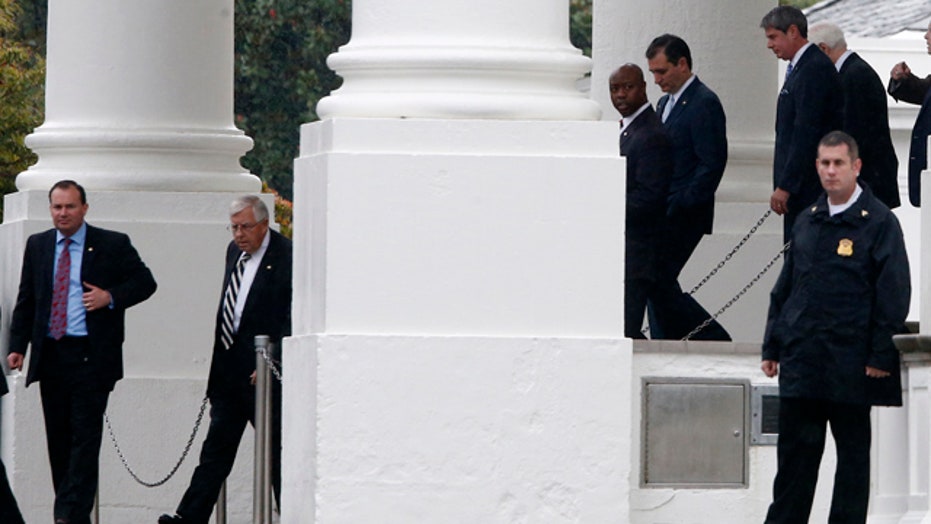 STEVE FORBES: It's not going to be done now because there isn't a mandate to do it. You set the stage for it such as having accounts for younger people in social security, change the delivery in healthcare, and do it in a positive way. But you set the groundwork; you're not going to make any headway with this congress, shoot for 2014 & 2016.

RICK UNGAR: I don't think they should but I would like to see the focus shift to where they are looking at entitlements in terms of cleaning it up, it should be in constant reform. Weed out the people who are taking advantage so we have the money for people who need the help.

JOHN TAMNY: I don't want the republicans to do it in their typical root canal way when they talk about deficits and how the country is going to come crashing down. Talk about it as an opportunity, say here's a way to pay down social security as in give people a way to opt out of it and have their own personal accounts. It's also a way to grow the economy, pay off these onerous promises. The problem is that republicans always get fixated on deficits and voters don't believe them.

SABRINA SCHAEFFER: We spend 60 percent of spending on these programs such as social security, Medicare, Medicaid. We need to do it in a way that's strategic. The American people want to see these programs survive, do it in a way that doesn't destroy our economy or crush them with taxation. We've done research in that this is a great way to increase popular support for spending restraint in general in talking about how to reign in entitlement spending.

MIKE OZANIAN: I think the biggest problem is that there is very little difference right now between democrats & republicans. The republicans want to slow down the rate of growth in government & entitlement spending. Democrats want to increase the rate of growth. When you have over $60 trillion in unfunded liabilities most of it tied to entitlements you need drastic reform. The only way we will avoid becoming Greece or like Detroit, is to empower individuals, give them the tax free money to take care of their own healthcare and own savings. Otherwise, it will never be fixed.

BILL BALDWIN: I think this country could veer off this long slow march of Greek style bankruptcy if it had the political will. If were running for congress, I would double Medicare taxes, second, I w ill cut Medicare benefits in half. Then we will be solid. Then I'd get no votes.

RICH KARLGAARD: It's even worse than what MacAfee said because in addition to the scammers, there are officially appointed groups like seedco who won the contract in New York, Georgia, Tennessee and Maryland that has been convicted of fraud in the past, the non-profit quarterly called them creative in their fraud creativity and these are the people that are officially running it.

RICK UNGAR: Yes, we should be careful with hacking, not only in government organizations, but in private organizations. To single out these people is ridiculous.

SABRINA SCHAEFFER: The problem here is that this is being run and operated by the government and the ramifications are serious. The best case scenario is that you are financially at risk here. The worst case scenario is that medically, you are under real threats. Someone else gets your identity, comb over reports, and suddenly you are getting misdiagnosed and mistreated.

BILL BALDWIN: A navigator is just a fancy word for organizers. There are some people out there who think they are organizers, that's someone who helps extract benefits from the government. If we flood the country with organizers, we will all be more prosperous because we will have more benefits. I have doubts about this. In the long run, a couple of billion dollars from stolen credit cards is the least of our problems.

STEVE FORBES: The blocking of doing criminal background check is just amazing that they wouldn't even go through something like that. That's why you will see the rise of and it's already happening in private exchanges like what Walgreens is doing and what others are doing. They will end up being the dominant force in the market. One of the ironies in ObamaCare is that we will end up with free enterprise because of the failure of these exchanges and the success of private exchanges.

JOHN TAMNY: Anytime a national government forces a one size fits all program on the American people, there will be waste and fraud and staggering incompetence and the answer to this is not reform, it's to get back to reality that healthcare at its best day should never be something to administer on a federal level. It should be cities and states and that way we as individual voters choose our bliss how much or how little healthcare we want from government. Most of us would choose little because we value it.

Plan to save parks from shutdown: privatize!

STEVE FORBES: That is to privatize them. If you don't want to privatize the whole thing, privatize their operations so you don't have these shutdowns. Also, make sure you also don't have bureaucrats who try and shut parks that they don't even own. The bureaucrats of the National Parks Service tried to shut down parks that were privately operated. This is an outrage designed to raise public opinion higher against what's happening in Washington and with the republicans, so put it in the hands of people who know how to run them.

MORGAN BRENNAN: I think we have a better chance of privatizing the TSA first. The national parks is an American institution, its American history, something that has been exported across the world, the idea of national parks. Government shutdowns, the last one was 17 years ago, they are a rare phenomenon and it didn't matter in this particular shutdown, we saw private parks that were shut down with the government shutdown like the parking lots of mount Vernon.

MIKE OZANIAN: The U.S. forest service is the model we should follow. Their budget has been axed yet they haven't closed any parks over the years because they have over 1,000 parks that are run by private operators.

RICK UNGAR: These are national parks, I don't understand how you can show this concern about talking about national parks and want to turn it over to profit making enterprises that will make it so expensive that it will too many Americans won't be able to go to them.

RICH KARLGAARD: No it's not, Rick has a false nightmare of Mt. Rushmore brought to you by Walmart, it won't happen. We are talking about bringing in enterprising people to manage the concessions and keep the doors open.