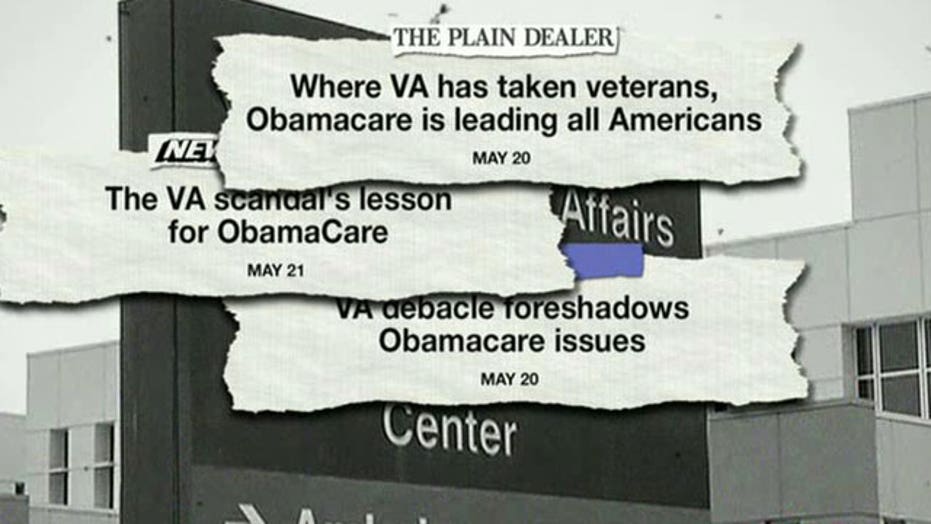 IS THE VA SCANDAL A PREVIEW OF WHAT HEALTHCARE MAY TURN INTO UNDER OBAMACARE?

RICH KARLGAARD: Rush is onto something. Rush understands something that big government liberals do not understand and that is you can't demand something into existence. If you increase the demand for healthcare, whether it is the VA administration or Obamacare, and you are not increasing supply through technology and market incentives, you will have delays or prices going up. There is no way avoiding the mathematics of this situation.

RICK UNGAR: I think what is going on at the VA is unconscionable. When I wrote a big check to my private insurance company, what was I writing that for if it has anything to do with the VA? Government is not providing healthcare under Obamacare.

STEVE FORBES: The government may not be running healthcare the way they run the VA yet but they are telling doctors how to do their procedures, one size fits all. The Journal had an article about an ophthalmologist, who didn't get paid because he didn't do a procedure that saved the girls sight; they are telling insurers what they can and cannot offer. Low income people are getting high deductibles, fewer choices of networks, so we are going to VA land, just a slower route.

MIKE OZANIAN: The rules of the ACA are causing premiums to skyrocket. Premiums for individuals and small-group rates are growing at their fastest clip in 3 years, between 11-12 percent. This is something that the President and Obamacare supporters assured us this would never happen. Just like how they said you could keep your doctor, premiums are going up, just like they said they would not.

SABRINA SCHAEFFER: The VA system is a platonic ideal for those who support Obamacare. This is an example of what happens when everyone has coverage, but no one has care. We want a system that will be good for men, women, veterans, civilians and that's a market-based system, a system that allows individuals to have choice and market to respond to demand.

JOHN TAMNY: For all of the military's virtues, it is bureaucracy, it is not run by free-markets, price signals, so when you look at one of its healthcare programs, it's no surprise that marked by rationing and bad healthcare outcomes. In Obamacare, undeniable, the government is going to have a bigger role in how healthcare is apportioned, it will rob it of market signals and because of that we will see the VA writ large on the healthcare system, the lucky ones will get out of it.

DR. CARSON ON "THE VIEW" TALKING ABOUT WELFARE IN AMERICA, DOES HE HAVE IT RIGHT?

STEVE FORBES: Absolutely, the country had welfare reform back in the 1990s; a city like New York over 20 years cut welfare rolls from 1.1M to 350k. If people are in real trouble, yes you have the safety net but people don't want dependents they want a vibrant economy which this President has not delivered.

RICK UNGAR: I think there is. Dr. Carson is right as it pertains to some people, but Whoopi Goldberg said there were a lot of people on welfare who do need it. We should spend time, effort and money separating out the people who need help, from those who are gaming the system.

JOHN TAMNY: You can't fix poverty by empowering politicians to allocate more capital that is the way out of poverty. If you want to fix it, grow the economy which means to shrink the government to allow more money to flow into the private sector. The government is doing the exact wrong thing and that's why poverty has remained where it is despite all the spending.

RICH KARLGAARD: What he tapped into was this reservoir of conservative thinking that was represented by the applause of his fellow panelists.

SABRINA SCHAEFFER: I think people are open to this idea and not because they see what happens when government largess pushes out civic society. We all want to help people, who are in need. We don't want this to be a go at it alone society, we are far too wealthy and far too compassionate of a country to allow that to happen. When we have a $70 billion food stamp program, we crowd out churches, synagogues neighborhoods and schools that should be filling the need of helping those in communities.

MIKE OZANIAN: The reason why more people are moving towards welfare reform is that people believe that when people are suffering, the government should help them. We are in an economic recovery and yet entitlement spending has been growing at a fast rate. That's when people realize that this President is interested in, is not in growth, it's in the redistribution of wealth. Most people aren't for that.

KOCH BROTHERS MOVIE SCREENED IN CAPITOL, IS THIS THE WAY TO SPEND OUR TAX DOLLARS?

JOHN TAMNY: I don't like taxpayer money being used to screen a right- wing documentary or a left. It's a good thing the republicans are filing an ethics complaint. I wish they would do this more often when taxpayer money is wasted.

RICK UNGAR: This isn't wasting taxpayer money because all the people who staffed the visitor center would have been working there even if someone didn't push the button on the DVD. Nonsense.

STEVE FORBES: We shouldn't have any of this on Capitol Hill, there are plenty of theaters around the country to run this stuff, so if Harry wants to bash the Koch brothers, go rent a theater and show the silly film.

RICH KARLGAARD: The left has reached a John Burge weird moment when they think the Koch brothers from Kansas have somehow pulled all the strings in the United States.

SABRINA SCHAEFFER: Democrats are so far ahead of republicans on campaign tactics, research, testing, yet these two brothers send them into a tailspin. It fits into their class-warfare narrative and they have to keep pushing forward even if it doesn't make any sense.

Wedding season is in full-swing; even Kanye and Kim are getting hitched this weekend! Our informers have stocks to give newlywed couples everywhere!