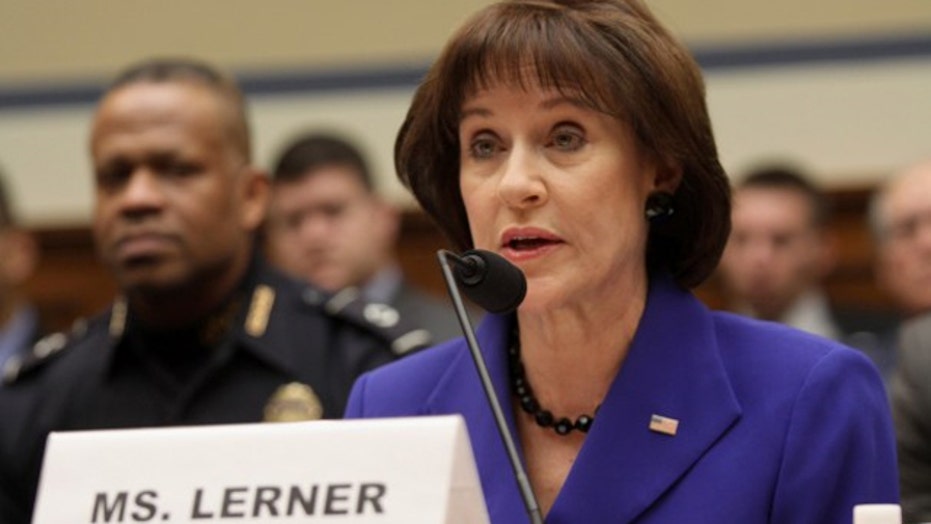 Calls grow to give Lois Lerner 'immunity' to testify

SABRINA SCHAEFFER: Yes, we do have to give her conditional immunity because this is about a larger issue, breaking a larger case. While it pains me to do it because we know that Lois Lerner was complicit in some of these clearly illegal actions we know he's a mid-level bureaucrat and these orders weren't coming from her most likely and we have to see if there's a link between the White House and the IRS.

MIKE OZANIAN: One of the key things with Nixon was the tapes that he had that the Supreme Court ruled he had to give up. What's most likely to happen is what Bill McGurn laid out in the Post in Friday's newspaper where he said that the subcommittee which has found her in contempt, will then cut a deal, they'll cut a deal with Lerner's attorney before Congress comes back from its Easter break and they'll have a meeting in private and she will give some testimony in private, not in the public like this and I think that is what they're going to settle on.

BRUCE JAPSEN: I don't really think this is much to compare as far as Watergate. I do think Mike has a point there. That because this -- I can't really see anywhere where this whole vote to contempt -- contempt vote has any practical effect whatsoever and the justice department, again this week said that they're taking their investigation very seriously. So, you know, I mean I assume that we're going to get something out of that.

RICH KARLGAARD: Yeah, it stinks to high heaven but the problem is and where the Watergate comparison breaks down is that Nixon had an independent prosecutor and his attorney general, the first one resigned because he wouldn't support Nixon and that is not -- there's not a chance that this is going to happen. Eric Holder is going to cover President Obama until the end of days and, you know, I don't know why Lois Lerner, what's going to compel her to take immunity? Immunity for what? What stinks to high heaven and the possibly criminal but I don't see why she would do this.

ELIZABETH MACDONALD: Yeah, that's absolutely illegal. You cannot use the IRS to bully your political opponents. And Rich hit the nail on the head; we don't have an independent prosecutor just yet. It's amazing that we had an independent prosecutor look at the Clinton white water loans when we don't have one here. Are we going to have Teleprompters pleading the 5th? You shouldn't have an IRS official being allowed to take the 5th. Give her immunity and would she have to testify at hundreds of hearings and answer every question? I'm worried that no prosecutor would take up this case if you give her immunity.

SABRINA SCHAEFFER: I agree with Sullivan. I don't think it should affect it. Eich seemed to have a lot to bring to the table from a business perspective. He was one of the authors of java script which drives the internet. He's been with the company for years when it was Netscape. There's a lot he clearly had to offer and, look, I can't stand a lot of the things that Sheryl Sandberg said about the wage gap but I still sign in to Facebook every day. The leader of a company is just simply not going to fit a certain mold of every one of their followers.

BRUCE JAPSEN: Yeah, that's true, David. I think one of the lessons is maybe he didn't know he was going to become a CEO. When you become a CEO you're a public figure so you're then subject to these types of things. So you become a public figure and another thing is I don't understand -- this is just my personal view on this, why and how -- whether a man marries a man or a woman marries a woman effects his daily life and $1,000 seems like a bet to put down -- it looks like he's on the wrong side of history anyway with the way the courts are ruling. A lot of things happened since this time.

ELIZABETH MACDONALD: Yeah. You know, that's interesting. And he makes an important point. It's someone's personal opinion. You're not going to change hearts and minds by bullying people into agreeing with your opinion. By the way, the antigay attacks have been abusive and just down right awful and wrong. Gay people have been vilified but I would not want to work at a job, no one would want to work at a job where someone is being bullied into agreeing with someone else's personal opinion.

MIKE OZANIAN: Of course but the guy that made this an issue is Eich. The board didn't want him out. The employees didn't want him out. I don't even think he really wanted the job. If he did he would have showed some backbone. He had the support of the company and workers. He backed out.

SPENDING TAX DOLLARS ON TRAINING NASA HOW TO LOBBY

RICH KARLGAARD: NASA doesn't capture the public's imagination as it once did. It's uncertain about its future. This is a ridiculous request. Why don't you pay Harrison Ford to be the head of NASA and bring glamour and glitz back in.

BRUCE JAPSEN: I'm a little surprised by this because the Obama Administration has reduced spending on NASA and even reallocated money toward technology. A few years ago they said they were going to give up the idea of sending a man on the moon and outsource it to the private sector. So this is surprising.

ELIZABETH MACDONALD: You make a great point. Clearly there's too many artificial intelligence in government if you think you need to teach a rocket scientist how to lobby. That's like teaching cows how to moo.

MIKE OZANIAN: I don't know. My take away from this is remembering this incident the next time any politician says they need a tax increase.

It's finally starting to feel like spring! So let's give viewers stocks ready to bloom with the warmer temperatures.