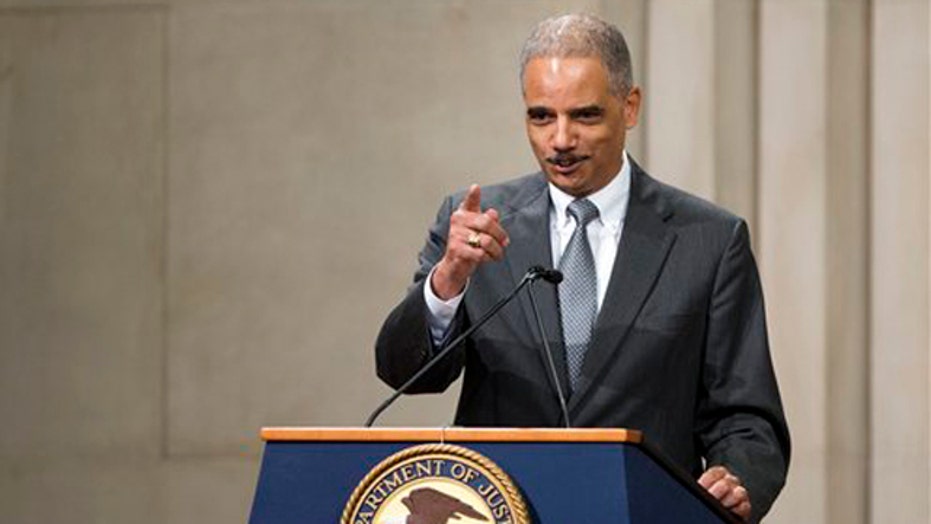 'Bullying' tactics from the administration?

CRITICS: "STRONG-ARM" TACTICS IN DC SHOULD RAISE ALARM FOR TAXPAYERS

Charles Payne: Everybody watching should know its bad news for everybody. Dovetails into what we've seen, HHS secretary going after companies, which they regulate, to ask for money and IRS being like a giant club to smash anyone that doesn't agree with the Obama agenda. These guys are judge and jury and executioner and they wonder why somebody doesn't want to sit down for a powwow, you got to be kidding me.

Ben Stein: What I don't understand, if Mr. Holder is going to say, "We're going to go after you with a club and then we're going to come with coffee and tea and be friendly. You can't talk about anything we said." How does that make him into a nice guy? The whole purpose of the media is not to be told things and keep them a secret. It betrays a misunderstanding of what media is. Media is to connect the government with the people. You have a break in the connection; it's not really the media anymore.

Charlie Gasparino: People come to me all time can we talk off the record. I sit down and I do listen to them. I set ground rules where I say, "Just so you know when you talk off the record I won't forget about your secrecy, I won't divulge the source," but there is something to be said. I will negotiate I don't have to forget it in the strictest terms, but I want to hear what you have to say.

Adam Lashinsky: The only mistake we're making is thinking there is anything new here. The one new thing is that Twitter exists so somebody can tweet out their thought at the very moment.

Dagen McDowell: They don't think it's a sin. I have had people, not sources, but people I've had to deal with treat me like utter dirt. Then try and make amends by calling me in to have tea and crumpets. I grew up near pig manure farms and I can smell it when it's in the room and if somebody's trying to muzzle me, I'm not going to go into a meeting and let them muzzle me.

Charles Payne: It reminds me 1977 blackout in New York City. My neighborhood was hardest hit with looting. At one store when they finally got the gates off it was a free for all. The Administration is like, "Heck. Everybody is snatching the cash. Let's do it, too." They have $10 billion and they hardly spend any of it. They don't need the cash but these see passengers held hostage by the airlines and they want a piece of the action.

Ben Stein: When they are doing airport construction, it's a nightmare. It's a joke. It takes forever and the lines are forever and it's miserable. They are going to improve by wrecking and mucking up the airports that is funny.

Dagen McDowell: Anything that reduces the number of flying I'm all for it. I highly doubt that a few bucks on every ticket are going to do it. There are so many fees, layer upon layer of fees, and taxes, up to a quarter of an airline ticket can be in fees and taxes. I don't think a few extra dollars are going to change people.

Charlie Gasparino: It goes into a one slush fund and is never used for the intended purpose, which is why it's a joke.

Adam Lashinsky: I don't think its joke at all. We have an airline system in our country that works extremely well. So many people travel so efficiently for relatively little money. I am for any use fee that helps the system survive. We should make sure it works right.

Charlie Gasparino: These are the same loons from Occupy Wall Street that said they don't have any jobs. How do you create jobs? Part is it lowering energy prices. There weren't shovel-ready jobs in the stimulus, but we got them right here the Keystone Pipeline.

Ben Stein: This isn't about any policy. This is about trying to attract attention to the protestors that they are morally superior to their parents. It's a psychological issue, not an economic or political issue. They're about a mental disease or defect.

Adam Lashinsky: Well, there is no need to hyperventilate. Gas prices are about where they were a year ago. Keystone will go through. We're in good shape.