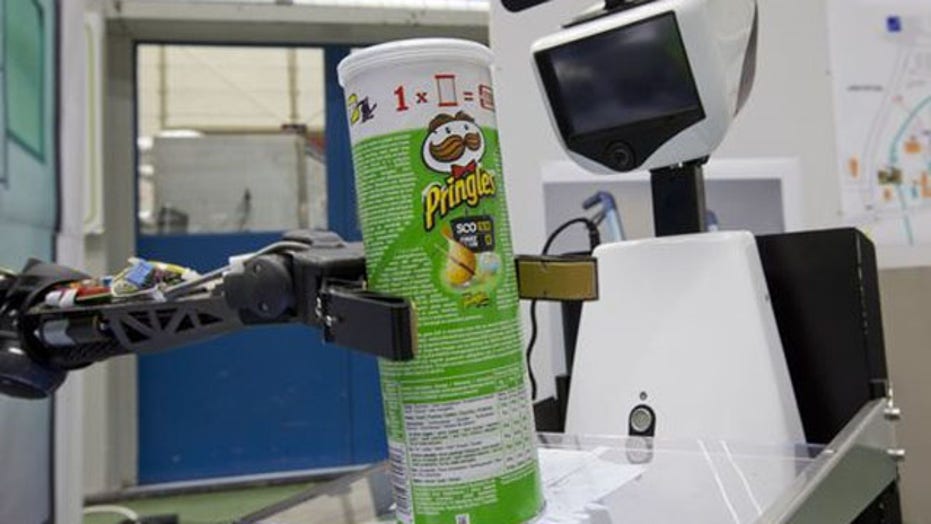 Automation shrinking the US economy?

GARY B SMITH: The minimum wage affects many jobs, many of which could be replaced by machines. We saw it years ago, with bank tellers. Now, almost everybody uses an ATM. We see McDonald's experiment in Europe, and at my supermarket, it's the same thing, self-check-out. It forces the company's hand, and if I can do that cheaper and faster with machines and the robotics' industry is happy to comply.

JONAS MAX FERRIS: Every one of these technologies is improving. You can make the case that raising the minimum wage could push work offshore to countries with really low wages and no technology, and it's going to happen anyway. When Google creates a self-driving car, because it's a better technology than having somebody not drive well and play the wrong radio when they're in the car with you.

TRACY BYRNES: We are not losing jobs but creating different ones, and maybe we should look at the educational system to train them for these jobs. We need kids to make the equipment so they can replace people, and we need somebody that will make the drone that will deliver wine to my house on a Friday night. It's a replacement factor. This is where we are going.

SASCHA BURNS: What we have to do is train for new jobs. You didn't have a car mechanic until you had a car. I can't imagine that you guys support the government would pay for this kind of job training.

JOHN LAYFIELD: I don't know what alternative universe this works in. Nothing makes me sicker in the world than everybody getting a trophy. Winning and losing happens, if you have no grading system for the employees, you are not rewarding the good employees but you are rewarding the bad employees. This is an absolute disaster.

SASCHA BURNS: The only good thing about it is its less expensive than settling all the lawsuits that were going to happen. It's a big mess, and yes, it's ridiculous. A lot it has to do with the way the agency was put together, so quickly, a public sector and private sector, and it's a snafu.

JONAS MAX FERRIS: Without a profit motive, I'm not sure if you can have discretion over bonuses. You can all of a sudden play favorites because what do you care? You aren't making any money anyway. Donald sterling was not not going to give bonuses to black players, because that would be stupid. Who cares in the government, give them the bonuses. That's what happens when you have the bonus discretion. Profits keep us honest in some ways.

GARY B SMITH: If you are the hard working CFPB person and you come in, and he is getting the same bonus as I am? Why am I going to work hard? Everybody will start slacking because there is no incentive to do a great job.

"DIVORCE PARTIES" ON THE RISE ACROSS AMERICA

TRACY BYRNES: There are 101 excuses to have parties today, and if your divorce makes you that happy, more power to you.

JOHN LAYFIELD: You take a practice swing in golf and most people need a practice marriage.

GARY B SMITH: I personally if I got divorced, I would be very sad. I would not be in the mood for a party. But that being said, I agree with Tracy, if they have the money, they want to spend it, it makes them feel good, and contributes to the economy, then I say fantastic and have at it.

SASCHA BURNS: They are stimulating the economy, and as long as I don't have to get a bridesmaid's dress or buy anything useless off the registry, then I hope they have a great time.

JONAS MAX FERRIS: This is a better use of your money. This is letting the word know you are available for another marriage and you can marry more money, and this could be a good investment, even though you are wasting $25,000.

GARY B. SMITH: GET READY FOR THE SELLOFF! (DXD) RETURNS A 10 percent GAIN BY SEPT

JOHN LAYFIELD: GOLDMAN SACHS AND BRAZIL BOTH WINNERS! (GS) KICKS UP A 20 percent PROFIT IN 1 YR