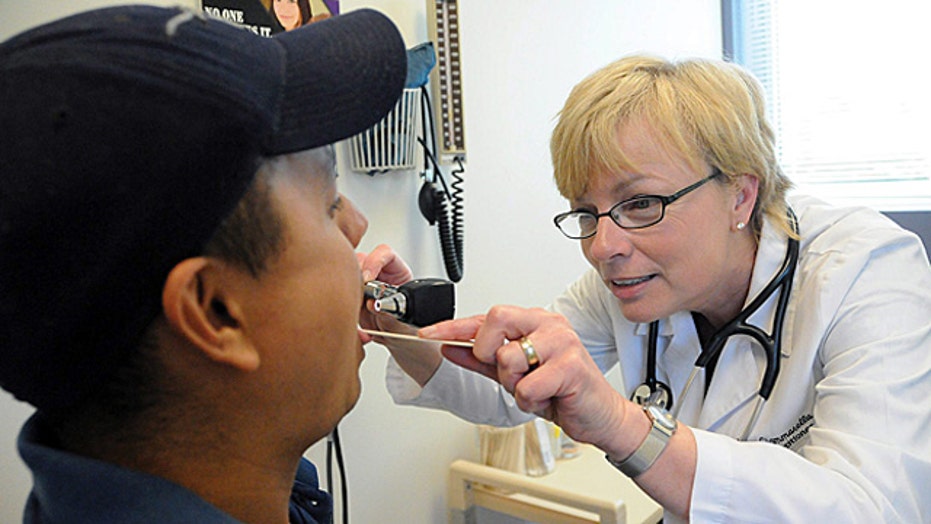 MORE STATES ARE WARNING THE HEALTH CARE LAW WILL MAKE INSURANCE PREMIUMS SPIKE; BUT THE WHITE HOUSE SAYS SOME STATES ARE MISREPORTING HIGH HEALTH INSURANCE COSTS; SO, WHO'S RIGHT?

CHARLES PAYNE: We're on the cusp of a world of hurt. There are too many stories out there from all parts of the country: premiums going through the roof; we've already become part-time nation; and small businesses are hunkering down. Every single day they're still cobbling this thing together. We're hearing that it is going to cost more. It's going to be an unmitigated nightmare and it's already begun.

BEN STEIN: I'm horrified. In California, insurance premiums are skyrocketing. Some of the big insurers saying they're going to leave the state altogether. When the Obama administration said "we're going to make sure you have to include people with preexisting conditions", that guaranteed a gigantic increase in premiums for everyone else. This is a nightmare; it's going to fall off the tracks and crash.

JULIE ROGINSKY: Well, first and foremost, look at the statistics. Premiums have actually been going up at the slowest rate in decades this past year. And if you live in places like New York state and California, premiums are set to fall. They're expected to fall by over 50 percent in New York City next year after Obamacare goes into effect.

DAGEN MCDOWELL: The fact that you are seeing employers react by limiting the number of full-time workers that they have. That's impacting the retail and restaurant sectors. Younger people don't have choices and premiums in particular for them could double or triple because they're going to still bear the burden of insuring those who have health problems.

CHARLIE GASPARINO: There's no way you could rationally predict the net savings. When you look at the CBO report, there were so many bells and whistles that had to happen to get the net savings they were predicting, that it was almost impossible. Any sort of other condition could hit the economy that would prevent those net savings. And I will tell you this, my brother's a doctor, the big fear doctors have is that they don't know if they have to ration the health care.

CHARLIE GASPARINO: Newspapers are a horrible business. That's the bottom line. It is a very tough business. This is the worst business in the world. Here's the big problem, the online model doesn't work really as a pay model.

DAGEN MCDOWELL: I was a print journalist, though I never worked for a newspaper. There are a lot of journalists out there that as a cocktail I would never want to drink. They're bitter and unappetizing. They're a mix of arrogance and insecurity. A lot of them are like that but then there's so many more who are go-getters, who will go after the story, who can take great pride in just a terrific turn of phrase. They want to produce original journalism.

CHARLES PAYNE: I think that the mainstream media shifted so far left that they put themselves in a real awkward box. Bezos overpaid four times for "The Post." Look at that national left leaning radio thing they tried. They pumped a lot of money in and it still failed. I think if it was a more cohesive product they put out there, fair and balanced for lack of a better phrase, maybe some of them would do well. And you said it, some of these guys don't believe in fair and balance, and that's why Sam Zell was saying that there's cost underneath it all.

BEN STEIN: The hand of Warren Buffett has got to be in there somewhere. Buffett is a great, great pal of Jeff Bezos. Buffett told me he thinks Jeff Bezos is one of the most brilliant men in the world. He had to do something with this deal. He also still owns that fairly big newspaper in Buffalo and he says he's very happy with it and he'd like to buy more newspapers. But maybe there's something going on there we don't know.

JULIE ROGINSKY: Well, look, the "Washington Post" is a different model than the "Wall Street Journal." Maybe that's the difference. Maybe Rupert Murdoch has figured out how to monetize this online.

FORD STARTING AROUND-THE-CLOCK PRODUCTION OF THE F-150 PICKUP WHILE GM IS SLASHING THE VOLT'S PRICE TAG BY $5,000

JULIE ROGINSKY: Americans love their big cars. Here's hoping that one day they will drive their big cars that get powered by renewable energy. It doesn't have to be gas.

DAGEN MCDOWELL: They don't hate electric cars. Sales of the Volt are up year to date 9 percent from a year ago. They're cutting the price on the Volt because Chevy is coming out with a Cadillac that has the same technology.

CHARLES PAYNE: You bridge the future. You go to hybrids for a long time and ultimately we will end up with electric cars. I think General Motors is taking marching orders from the White House. I don't think they would be this deep in to it if they weren't.