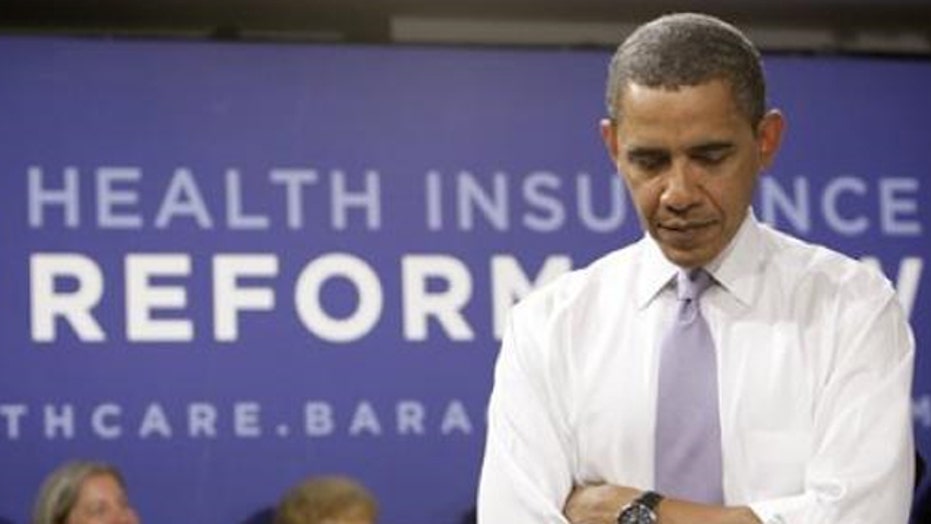 TRACY BYRNES: When you sit down to do your 2013 tax return in April, you are going to realize there were 13 new taxes in 2013 alone. We are talking about increasing dividends, Medicare, payroll taxes, you name it; we were clobbered in 2013. Mentally you are already psyched out about what's going to happen about 2014, plus you have the ObamaCare fees that are going to hit coming in 2014. Everyone is going to be thinking about these things all day long, that's going to hurt consumer spending, and it's certainly going to make you not want to get out there and boost the economy.

DAVID MERCER: Let's look at the bigger picture, which is that overall costs on healthcare are growing at a slower rate and are likely to come down with the premiums to all the customers that are coming into the insurance market. That's the whole principle and purpose; with more customers you have lower premiums, lower costs, which the market is going to factor in. ObamaCare has already been factored into the economy and the market. We had 4.1 percent GDP growth in the third quarter. I don't think it's slowing down because of the fees associated with the Affordable Care Act.

JOHN LAYFIELD: ObamaCare wasn't around in 2009, so you can't attribute a decrease in health prices to that. About 80 percent of those studies have shown that it had nothing to do with ObamaCare whatsoever. You are seeing a lot of taxes here. This was supposed to be free. It was supposed to reduce costs. This is being paid for by taxes. When you say the young are getting a subsidy, there is not a subsidy tree in Washington, D.C. Taxes that are coming out to pay for this. This is what is really happening here.

GARY B. SMITH: The registrations, even though they have been ramping up, are still under the level that the administration said they wanted or needed. I don't think a lot of people are going to be affected by ObamaCare taxes because I don't think ObamaCare is going to be successful at all. People aren't signing up. Look, I got a chance from BlueCross/BlueShield to just extend my policy until next year. I know my daughter isn't even signing up for healthcare. The IRS has no way to go out and garnish wages and collect that money. I don't think it's going to affect it because I think the whole thing is a big bomb.

JONAS MAX FERRIS: I would agree that 95 percent or more of the dollars of new taxes, whether hidden in the Affordable Care Act or are just blatant tax increases on capital gains. We are already paying these taxes, government revenues are going up because of it and the stock market was up almost 30 percent. It has been the best year since around '95.

JOHN LAYFIELD: A government that can't build a website, you want to talk to them about hacking? 47 percent of credit card fraud is in the United States despite 24 percent of the usage. Computer chips in cards would help that. That's what we need to do. As far as UPS, they hired 55,000 part-time workers, 23 extra jets, and they still underestimated demand. The market will deal with them. But Congress should stay out of it and get its own house in order.

DAVID MERCER: I think it's ridiculous, a company, Target or UPS or any other, has to wait for a congressman or senator to say, ‘Hey, how about tend to your customers, protect them against breaches on private data and give them a refund when you don't deliver on the promises.' If they don't want government to tell them, then they should just do it themselves.

TRACY BYRNES: It might not have been right away but it was a corporate decision. If Target wants to go down in a pile of flames because they made a mistake, that is completely their prerogative.

GARY B. SMITH: Target has already paid for this. They lost a substantial amount of business in the height of the Christmas season due to this. If you're going to have the government come in, it's essentially an extra tax. There are going to be extra regulations. That's what you get for having the government meddle in these affairs.

JONAS MAX FERRIS: I'm all for government when there's no free-market solution. In this particular case, since there is a UPS, Fedex and the Post Office, this will resolve itself. If there was only one shipping company, you would definitely have to shake them down and put them in front of Congress. This is not that case. I think the Target thing will work itself out where Visa will get on their case for all the fraud stuff. If there's no solution that is when the government needs to look out for the people, but if the free market can fix it on its own, then you don't need to.

GARY B. SMITH: I was just thinking when I moved out from my parents, all the expenses I had forgot about, including utilities, renters' insurance, food, all the things that my parents provided. So yeah, it's going to be a drain on the economy. Good for the families, though. It allows them to save money.

TRACY BRYNES: You need emotional support, financial support. It's not like these kids will be in the house forever. They just need a little help. In this day and age, why not save it as opposed to waste it and have the kids in bankruptcy before the kids are in kindergarten.

DAVID MERCER: I agree with Tracy in that rather than taking out a loan and running the risk of ending up in bankruptcy or foreclosure, better play it safe coming out of the biggest recession we've had in years and to save money to later buy a home. Play it safe now and husband your resources for later.

JONAS MAX FERRIS: I would rather see these kids borrowing money to buy a house and having lots of kids, because that would be the best for everybody. But unfortunately, I'll take the kids over the house even though the housing market needs it. When I see these babies, I see that kid paying my social security some day. We need more babies. The country is getting too old. It's bad for the economy.

JOHN LAYFIELD: Young people in the house are much better for the economy. This is a sign of the times. It's a good thing to have a family to fall back on, a lot of people don't.