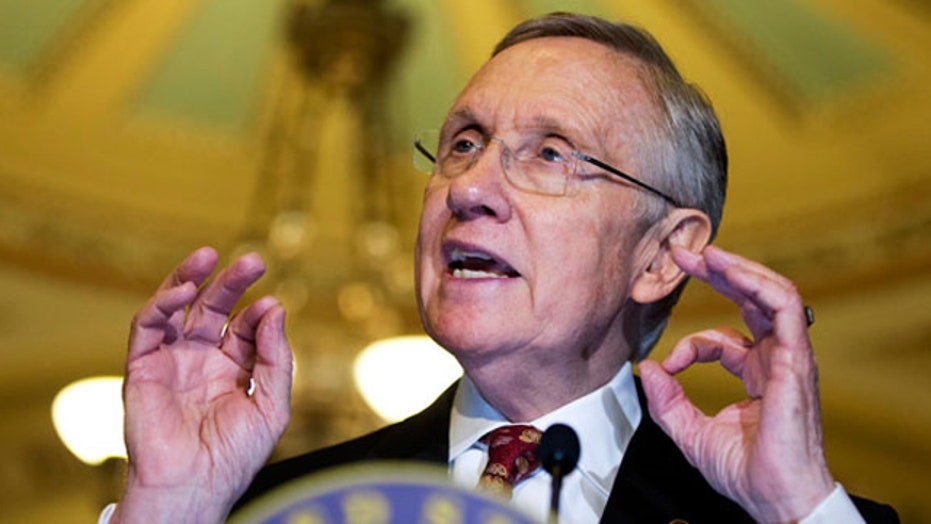 GARY B. SMITH: It's enough to make you pull your hair out, Brenda. Here is one of the leaders of the country, if you will. He's basically saying we are just too dumb to figure this out. Meanwhile, it's like everyone's grandparents are on Facebook, everyone is using Amazon to order things. Who are these people who don't understand the Internet? I would like to find those three people in the world that have access to the Internet and say, I can't understand it, it's too hard for me. That is just ludicrous. The other thing that annoys me is the push out on this deadline. People can opt out via some honor system. They hit a check box saying, dog ate my homework, I didn't feel like it this day, I didn't understand it. I would like the IRS to adopt that same policy in paying our taxes. I just didn't feel like it. Let me have a few more months. It's an insult to the American people.

JONAS MAX FERRIS: I think Harry Reid is partially right. I think, a lot of people obviously know how to use the Internet. They are not used to web pages taking two hours to load, so there's that problem, but let's talk about the people that don't even have Internet. 25 percent of poor people don't have Internet access. A lot of poor people don't have insurance. The target audience is people often without Internet are not very good or dial-up Internet, making the problem worse with the website. I do think when they framed this thing, they underestimated how difficult it is going to be to get uninsured people in America, a subpopulation of people, some don't want insurance, some don't have a computer or a phone, to get insurance. It's not like social security. We walk into an office and get check in the mail. It's hard, complicated. You've got to pick all these different plans. I think that was underestimated. He's beating around the bush, but addressing an important issue why it's going to be slow going.

JOHN LAYFIELD: No, I don't. I don't know if the granddaughter that Harry Reid is talking about is smarter than the rest of us, if that's the one that was discovered, he gave $17,000 to out of campaign funds, that he said, "Hey, don't worry about that. I'll just pay it back." I guess that's how it works in DC. I don't think the American people are dumb. Politicians underestimate the American populous. Both sides of the aisle tend to do that. They think they are smarter than Americans and above the law. That's why they can say stuff like, 'You keep your doctor. You like your plan, you keep it." This is the law, they change the law. When Sebelius was asked if they would go past the date, she said no. Sure enough, that's exactly what they're going to do. They constantly overpromise. They constantly under deliver. To blame it on the stupidity of the American people, that's an outrage.

MARK HANNAH: There is a lot of outrage, phony outrage coming from the Republicans.

I don't know where they were when George Bush extended the Medicare part D deadline for seniors to have more time to sign up for this. He didn't say the Americans were dumb. Nobody is saying Americans are dumb.

TRACY BYRNES: I don't think anybody is saying they are dumb. The irony here is that this is the administration that wanted to bring Wi-Fi to rural areas, so they knew --

JOHN LAYFIELD: Most importantly, get Congress out of this. This Congress was investigating steroids in baseball while the housing crisis was falling all around them. These guys are a three-ring circus. It is an embarrassment to the country. It's "He said, she said." They turn it into a dog and pony show. That is why you have 14 different hearings and nothing has been accomplished. Get a special prosecutor. They admitted certain words like conservative targeted the IRS to that group. Was that malicious or not? That is something Lois Lerner needs to be able to testify to. This Congress will never get anything done.

MARK HANNAH: I agree. We should absolutely take politicians out of this. The IRS is an easy target right now and there's no question that what Daryl Isa is doing is politically charged. He's hypocritically making political calculations himself.

GARY B. SMITH: Exactly, Brenda. I agree with John and I agree, surprisingly, with Mark on this. I think this just doesn't pass the sniff test. They had 14 subpoenas. There are obviously political shenanigans going on here. Anyone would be stupid not to think that. We spent hundreds of thousands of dollars trying to gather that data. We know what is going to be the answer. We know if we get a special prosecutor, we know there is going to be political shenanigans went on. Fine. We get that. Some people get thrown out, fired, whatever. What we need to do is separate out the IRS, Federal Reserve, and make it an independent agency. Let's acknowledge that stuff goes on, whether it's Republican or Democrat in charge. Let's acknowledge that, move on and fix the program.

JONAS MAX FERRIS: This is one of the rare cases where we need a politician more like real politicians that have legal backgrounds and don't have real experience, less like Darrell Issa. The problem is he is a successful entrepreneur, was in the military and he is not going to negotiate. He treats Lerner like she is an employee he can fire, when in fact she can out game him legally.

TRACY BYRNES: No way. We spent enough money. I agree it should be stopped. At the same time we have the right to know why keep taking the fifth if you have something to hide. President sits in front of Bill O'Reilly and says, "No corruption here." Give me a break.

TRACY BYRNES: Yeah, huge. Tuition is going to go up. How much are you going to pay for all this? Union will demand these kids get way more than they get now. Many of them are on scholarship. I get they get hurt and are looking for insurance, but that's not the way to do this.

They deserve maybe to be paid but put the money in a fund until they graduate. Union is not the way to do this. Then you know what? Nothing good comes out of use un-on these days.

JOHN LAYFIELD: Absolutely. College sports are a $16 billion business. There is nothing wrong giving these kids a stipend. If you're on scholarship, unless your parents have money, you can't even go out and buy a soda. You're not allowed to do anything except eat at the cafeteria school. I think that's wrong. They should be allowed endorsements that are in a trust fund until they graduate. This is a union grab. That's the reason they are going after profitable revenue-making sports here. The problem you have, if these guys are classified as employees, then their scholarships are taxable. That goes down to the swim team, track team. That makes certain kids not able to come to school because they don't have the money to pay taxes if classified as employees. Unionizing is a complete disaster for this.

MARK HANNAH: No, I don't. Grad students get together unionize because they're teaching assistants or researching assistants. They have a similar transactional relationship that student athletes do. I'm doing my PhD at USC, which is a big football school. One former player was telling me he was buying a pizza and scrounging through his couch cushions to pay a dollar or two. Then the pizza gets there and it's his image on the cover the pizza box while he is a star football player. That just illustrates how broke these students are, but they are participating in a multibillion dollar industry and not getting any remuneration for it whatsoever

JONAH MAX FERRIS: Observing it, oddly, I don't understand why they are not treated like pro ball players. Unions, contracts, sponsorships, agents, whatever. At the end of the day, they are getting paid by the school to go to the school. They are giving them a quarter million dollar degree. That's the compensation. They don't get into the school for academic reasons, let's be honest. They get injured, their careers get ruined. The NCAA gets all this money. Tuitions already go up at almost every school because of the athletic departments, so you can't say tuition's going to go up. It's going to raise ticket prices, which it already should. It costs more to see these games. Too bad.

GARY B. SMITH: I think I agree with Tracy. I don't like this at all. What I'm trying to figure out, how is this different, for example, than Mark getting a scholarship to study whatever he is studying at USC? I bet one of the stipulations was the amount of hours they put in. I bet mark is putting in 50 hours a week. Substitute the word professors for coaches. I bet he is under control of his professors pretty good. He can't not study, not do the work. Isn't every person at a university on scholarship, they could be unionized also. It's too hard. I don't feel like working Saturday, studying. This is the wrong approach.

GARY B. SMITH: Walmart vs. Visa has (MA) swiping up 20 percent in 6 months