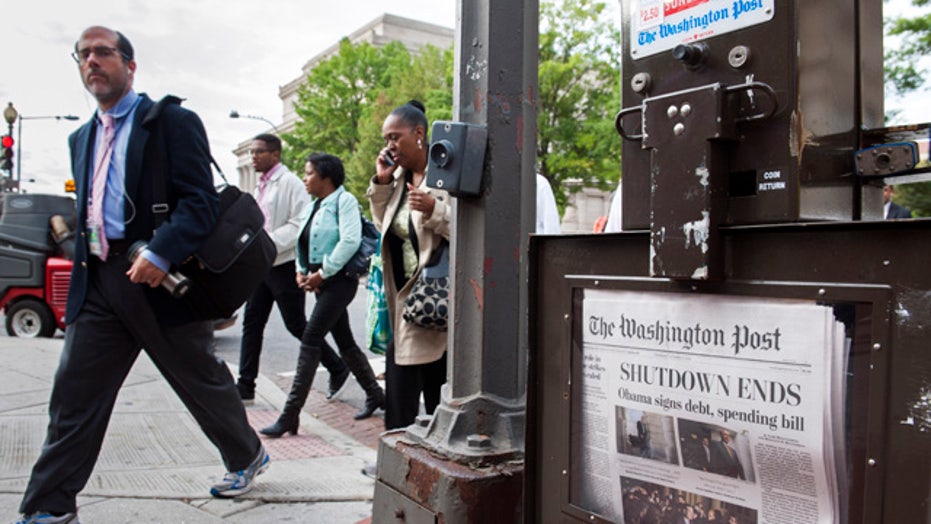 Americans getting raw deal with deal to end gov't shutdown?

Would no deal be better than this deal?

GARY B. SMITH: The whole reason we went through these shenanigans was to cut back on government. Instead, we got almost the exact opposite. Not only is the government spending more but this Kentucky kickback is indicative. That was $2 billion extra that we've been appropriated from the American tax payer. That original project was only supposed to cost $775 million, so the cost now of that has tripled. That is indicative of things like ObamaCare, Social Security, Medicare, Medicaid, that's the whole reason we went through that to cut down on ineffective government spending, instead we are going the other way.

JONAS MAX FERRIS: It would have been ideal if we dealt with the long term issues; that was the whole point of this. We got the worst of all worlds, but we didn't really because there is still one thing worse, if the interest rate goes up even a few percent all of a sudden you are talking about a trillion dollars in interest that we weren't paying. Then we really would be Greece because the tax payers would be paying for it. We got off a little better then it could have been, but it sure wasn't perfect.

JOHN LAYFIELD: We should have taken default off the table. As far as this deal, this was supposed to be about character and integrity; it's supposed to be about stomping your feet and making a stand, then all of a sudden you throw this Kentucky kickback to McConnell and all of a sudden the Republicans say let's forget all about this and do absolutely nothing. We got no deal. We are on the exact same path we were 16 days before this when shutout first started and we are no further ahead right now.

DAVID MERCER: The expense of not reopening the government and ending the shutdown or coming anywhere near the prospect of defaulting and not raising the debt ceiling was far greater than anything you see in the bill that ended the shutdown. It's a deal that had to be done and saved us as a whole.

TRACY BYRNES: The government was never going to shut down and we were never going to default. Why does this happen all the time? This will never change unless we change the system all together because this notion of "this is just how things get done in Washington" is a joke. We need term limits we need these guys to go home because everything is about the next vote. It is not about us at home; they just want to be able to get the good tables at restaurants and the free cars off of our tax dollars. The system is totally flawed and we are going to be doing this over and over again.

JOHN LAYFIELD: We have structural high unemployment in the United States; we are not built for that. This is not cyclical; if this was cyclical the lower rates could help the problem but it's not helping the problem, in fact, it's hurting the problem. Seniors with low rates can't make very much off their retirement income. Over 20 percent of seniors ages 65 and older are staying in the workforce because they need the money. We are the only developed country in the world without a national energy plan. We have no long term plans and because of that there is no job creation event on the horizon.

TRACY BYRNES: If your choice is between a well-dressed elderly person who is responsible and shows up, or some kid that comes in smelling like God knows what he did the night before, the job is going to the elderly employee. I think that is where a lot of our kids are these days; we need a little work ethic back into the system.

JONAS MAX FERRIS: You can't retire at 65 necessarily and just live off your Social Security because you are going to live a lot longer then you were 20 or 30 years ago because of the health care system, which means you have to work longer. If you are working you are probably going to be spending more money which is good for the economy. But it is not ideal for new workers with high employment levels to have people staying on the job longer.

GARY B. SMITH: Young people would be able to get jobs if the economy was growing like it did in the ‘90s. This economy has done nothing, as the government grows the private sector and GDP slows down. People can't afford to retire.

DAVID MERCER: People have to continue working because they lost value in their pensions after going through the recession. There is nothing wrong with having productive members of the American economy remaining productive. We need to stimulate more growth and continue in the recovery from the recession. With that, you have both younger workers getting more jobs and those allowing themselves in retirement to continue to afford to retire.

TRACY BYRNES: You know what you have to pay, so pay it and get it done. Don't spend on the crap you don't need. All they constantly do is stuff for media attention. It's all for publicity it's nonsense we could have taken care of this a long time ago.

DAVID MERCER: With the sequester for a lot of Americans, and everyone in general, you have to do more with less. That is exactly what they issued in their statement. Despite sequester budgets, they have learned to still be able to have the tours at the White House. It's an adjustment; it is not a matter of spending money that isn't there, it's a matter of getting things done on a smaller budget.

GARY B. SMITH: The White House was closed because they said it was a sequester. They are smart enough to have the NSA spy on everyone's emails but they can't somehow prioritize. The sequester is still on and somehow the White House is still open. Something is fishy here and it doesn't take a rocket scientist to figure it out.

JONAS MAX FERRIS: Yellowstone and the White House are not what are bankrupting this country. All the stuff that is bankrupt has kept going on. Some of it is political, but it is also because they don't know how to run a business. The government is never to going to make decisions rationally they are going to arbitrarily close things that are profitable.

JOHN LAYFIELD: It's a matter of prioritizing, live within your means, they are still not doing that.

TRACY BYRNES: Google tops $1,000 per share! This is a new tech boom not a bubble

JONAS MAX FERRIS: You buy, the spy! (MDLZ) gobbles up a 20 percent profit in 1 year