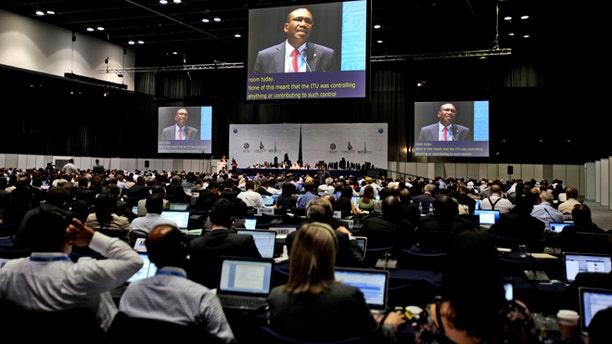 A U.N. conference weighing possible Internet rules shifted into high-stakes showdowns on Thursday after advancing a proposal for greater government oversight. The proposal was a blow to U.S.-led efforts to keep new regulations from touching the Net.

The move frames the ideological divide at the 193-nation gathering in Dubai, which is scheduled to wrap up Friday with its first revisions of global telecom rules since 1988 -- years before the dawn of the Internet age.

A Western bloc led by a powerhouse U.S. delegation seeks to block any U.N. rules on cyberspace, fearing they could squeeze Web commerce and open the door for more restrictions and monitoring by authoritarian regimes.

A rival group -- including China, Russia, Gulf Arab states and others -- favors U.N. backing for stronger sway by governments over all levels of Internet affairs.

They appeared to win a critical preliminary battle early Thursday when the meeting's chairman declared consensus on a proposal for a more "active" government role in Internet dealings. There was no formal vote, but Mohammed Nasser al-Ghanim said he based his decision on "the temperature of the room" following marathon negotiations.

That brought an immediate backlash from the U.S. and its backers, which questioned the procedure and vowed to keep any new Internet rules from the final treaty by the U.N.'s International Telecommunications Union, or ITU.

The group -- formed in the 1860s when the telegraph ushered in instant communications -- has no powers to instantly change how the Internet operates. It also cannot compel reforms by states that already widely censor cyberspace.

But the U.S.-led coalition at the talks argues that any U.N. codes sanctioning greater government roles in the Net -- even under the framework of state security -- could be used as justification for even more controls from Web watchers in places such China, Iran and other nations.

Nations favoring a heavier government hand are likely emboldened by getting their resolution adopted. However, it still needs to clear at least two more hurdles before it can be considered for the final document and will face strong opposition from the U.S. and others.

"It's not a crime to talk about Internet inside the ITU," said the group's secretary-general, Hamadoun Toure, suggesting high-level support to keep debate going on Internet issues.

A statement from the Internet Society, an international group promoting openness in cyberspace, called the advancement of the proposal "clearly a disappointing development."

The U.S. team in Dubai also includes heavy hitters from the tech world such as Microsoft Corp. and Google Inc., which also have stood up against proposals by European telecoms companies to charge Internet content providers for access to domestic markets around the world.

Other issues on the table include calls for more transparency on roaming charges by mobile phone companies, efforts to fight Internet fraud and spam and creation of a worldwide emergency number for mobile phones and other devices.