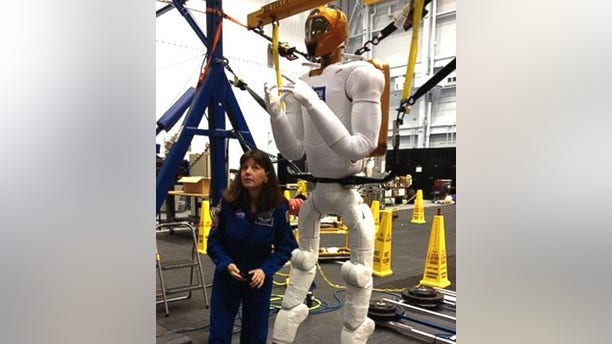 Robonaut, the International Space Station’s (ISS) long-time resident robot, has been a boon to the crew of the habitable satellite since its arrival there in 2011.

The highly dexterous robot-astronaut has been helping out on the space station with an array of tests and tasks, though its absence of legs has understandably placed significant restrictions on its capabilities.

The good news is that the ISS has just taken delivery of a pair of specially designed robotic limbs that should soon have the eight-foot tall robot happily sauntering around the satellite, though it’ll be well advised to mind its head in the cramped conditions.

Up to now, Robonaut has been perched on a pedestal, with astronauts having to carry it to wherever it needs to be in order to perform its various tasks. The new space legs mean the robot will soon be able to move around more independently, allowing it to help with simple chores and errands.

It’s planned for Robonaut to one day assist with difficult or dangerous tasks in more challenging environments, and could eventually  be sent out to explore lunar and Martian terrain.

Designed and built by NASA and General Motors at a total cost of $14 million, the robot legs each incorporate seven joints, a light, camera, and sensors for constructing 3D maps of its environment.

“This project exemplifies the promise that a future generation of robots can have both in space and on Earth, not as replacements for humans but as companions that can carry out key supporting roles,” NASA’s John Olson says on Robonaut’s official website. “The combined potential of humans and robots is a perfect example of the sum equaling more than the parts. It will allow us to go farther and achieve more than we can probably even imagine today.”

Robonaut’s legs won’t be attached for a few months yet, though it’s evidently looking forward to the prospect, tweeting to its 65,000 followers on Monday, “Hoping to get the legs checked out and installed around June. Should be an exciting summer.”