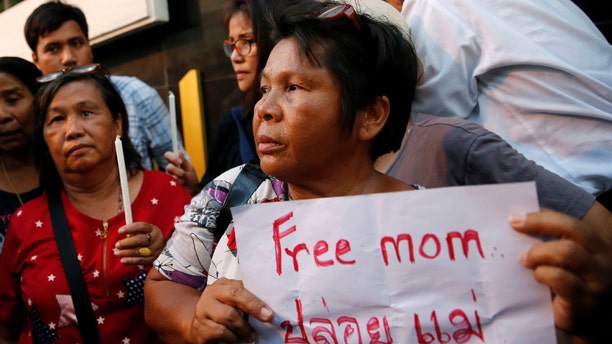 People take part in a demonstration asking for the release of Patnaree Chankij, mother of anti-junta activist Sirawith Seritiwat, in Bangkok, Thailand May 7, 2016. (REUTERS/Jorge Silva)

A cleaning lady in Thailand, the mother of an activist leader, faces up to 15 years in prison after posting “I see” on Facebook.

Patnaree Chankij, a 40-year old widow and mother of three, was charged by authorities earlier this month for failing to rebut a Facebook message that allegedly defamed the country's royal family. Citing her lawyer, the BBC reports that Patnaree responded to the message with the word “Ja,” the Thai equivalent of “I see” or “ok.” The exchange was between Patnaree and a political activist, according to the report.

The complaint against Patnaree was filed with police by the military. She was arrested for allegedly violating the law on lese majeste — defaming the monarchy — and the Computer Crime Act. Lese Majeste is punishable by three to 15 years in prison.

“I was very shocked,” Patnaree, who was released on bail, told the BBC in an interview Friday. “In the Thai society, this charge is serious and it shouldn’t have anything to do with me.”

Patnaree is the mother of Sirawith Seritiwat,  leader of a small group of activists who have repeatedly staged demonstrations against Thailand's repressive military junta, which took power in May 2014 after toppling an elected government. The second anniversary of Thailand's coup is Sunday.

The arrest was widely seen as a way of putting pressure on Sirawith, who has been detained and arrested numerous times.

According to her charge sheet, which was posted by Patnaree’s lawyers, the police alleged that her use of the word showed that she agreed with the post, which police declared "can be harmful to the Kingdom's security and stability ..."

Human Rights Watch says that Patnaree was responding to a Facebook message from Burin Intin, a friend of her son. Burin was arrested last month on lese majeste and computer crime charges, the Bangkok Post reports.

“The Thai junta has sunk to a new low by charging an activist’s mother under the ‘insulting the monarchy’ law, which has been systematically abused to silence critics,” said Brad Adams, Asia director at Human Rights Watch, in a statement released earlier this month. “Prosecuting someone for her vague response to a Facebook message is just the junta’s latest outrageous twist of the lese majeste law.”

Last year Thailand's military courts issued the harshest sentences in recent decades for two people convicted of insulting the monarchy on Facebook. Pongsak Sriboonpeng was sentenced to prison for 30 years, and a mother of two young girls was sentenced for 28 years.

Pongsak was initially sentenced to 60 years imprisonment, 10 for each message, but his sentence was halved because he admitted wrongdoing.

Patnaree’s arrest is the latest in a series that began last month for people who posted online material critical of the country's ruling junta and its policies. Several arrests have also been based on texts sent privately over Facebook Messenger, causing alarm that users' privacy is being violated.

Users are also disturbed that Facebook has blocked a site that allegedly mocked the monarchy, the first time it appears to have done so in Thailand. The page redirects to an announcement that it is blocked to be in compliance with Thai law. In response to the Facebook issues, several activists have started a campaign to stop using the huge social network in favor of a competitor