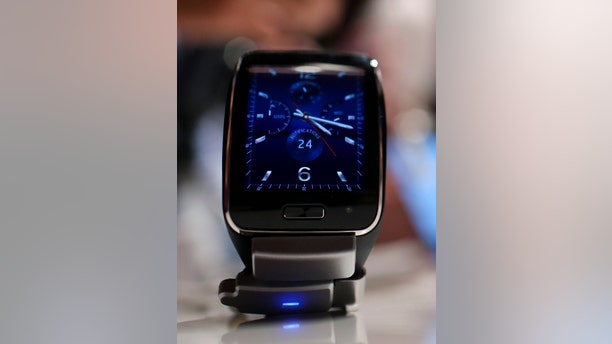 After starting the smartwatch arms race by announcing the Galaxy Gear a year ago in Berlin, Samsung today returned to the city with a new version of its flagship wearable: The Gear S. The newest member of the family brings users new features that will distance them further from their smartphone and make the wearable more of a standalone device.

The Gear S is equipped with its own SIM card and is now capable of 3G connectivity, which makes it possible to put to use the wearable without having the phone alongside it. One of the biggest complaints with the original iteration of Galaxy Gear was the requirement to be constantly connected with a paired smartphone. While the Gear S will still have to be paired initially with one of the 20-some Samsung Galaxy products — including the Note 4 and Note Edge — and has to be connected for app updates, the full feature set for the Gear S is available without connection.

To make the Gear S capable of serving as a primary device, a full QWERTY keyboard can be used on the 2-inch display — the effectiveness of which is yet to be seen. “We wanted to replicate as closely as possible the smartphone experience,” Samsung stated, and it placed an added emphasis on user interface with the new wearable. Running on Samsung’s own Tizen OS, improved navigation puts notifications, widgets, and apps all within a single swipe of the home screen. Bluetooth and Wi-Fi connectivity make notifications and messages easier to send and receive. The Gear S also features a built-in engine for S Voice, so all voice processing is done on-device rather than connecting to a server.

The display on the Gear S also received some improvements. Now on the curved AMOLED screen, users will be able to choose a variety of clock faces to match their style and preferences. Pertinent information and notifications are shown directly on the watch face and appeared integrated into the design so as to not look entirely out of place.

Samsung put an emphasis on the fitness capabilities of the Gear S with its S Health workout suite. The application provides the wearer of the smartwatch with real-time information about their health and workout performance. A built-in pedometer tracks steps and has been optimized for difference exercises, so it can differentiate between a run and a bike ride. Sensors built in to the Gear S track a variety of information and provide suggestions — for example, which SPF sunscreen to wear before running in the sun. GPS location tracking will mark out the path of runs and rides without requiring a smartphone in hand.

On top of the changeable watch faces, Samsung also noted that a variety of straps will be available for the Gear S, including ones created by the company’s new partner Swarovski.