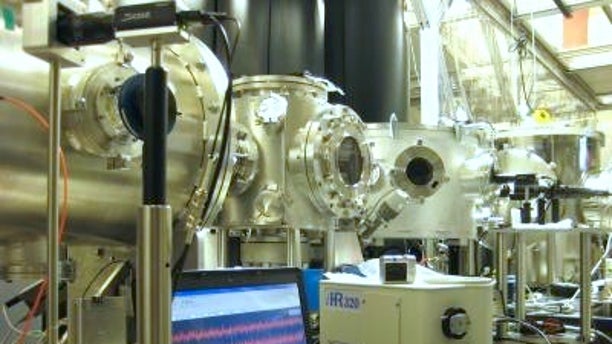 By using lasers and plasma instead of magnets, this device does the work of a traditional accelerator that is the length of two football fields. (Rafal Zgadzaj)

Just as computers shrunk from room- to desktop-size, high-energy particle accelerator dimensions are going from acres to inches.

Scientists at the University of Texas at Austin have developed a tabletop accelerator that boosts electrons to the same speed and energy that requires traditional atom smashers the size of two football fields.

The compact mechanism uses a method called laser-plasma wakefield acceleration. It may allow labs worldwide to have their own facilities to study matter on the molecular level, and similar technology may one day help downsize the machines currently used to treat cancer with proton therapy.

Traditional particle accelerators are huge — from the size of a room for medical applications to the size of a small town for advanced physics experiments like those conducted at the Large Hadron Collider.

Surfing the waves
The University of Texas breakthrough was using the energy of plasma, rather than electromagnets, to accelerate particles. Plasma, the fourth state of matter, is an incredibly hot mix of charged particles found in items as grand as stars and humble as fluorescent lights.

To create plasma, a team of researchers from the University of Texas at Austin shot a very intense short laser pulse at helium gas. The leading edge of the pulse heated it up to sizzling temperatures and ionized it, ripping electrons from their atoms. The main part of this same laser pulse at peak power in the order of a petawatt — a quadrillion watts — then interacted with this "soup" of negatively charged electrons and positively charged ions.

The light pressure from the laser beam separated the negative and the positive charges, creating an enormous internal electric field. Some of those displaced electrons then found themselves behind the laser pulse, hitching a ride on its wake — the track of turbulence the beam leaves in the plasma — to get to higher energies.

"Imagine a boat propagating through a lake, the boat displaces some water and as it moves, it makes a wake, or a wave, behind it, and then a surfer could ride one of those waves and accelerate," the lead author of the study, Michael Downer of the University of Texas, told TechNewsDaily. "That's how the accelerator works." [See also: New Laser Uses Light-Matter Beams]

Protons against cancer
The team has been experimenting with the accelerator for some time, but the latest achievement has brought half a billion electrons to the same energies as monster machines do — 2 Giga electron Volt (GeV) — over a distance of just 1 inch. It is the amount of energy an electron gains or loses as it moves across an electric potential difference of 2 billion volts.

A traditional linear accelerator that uses magnets instead of plasma (for instance, the SLAC National Accelerator Laboratory in California) needs a lot of space — about 420 feet (128 meters) in length — to reach this level of energy. Downer said he expects to reach energies of 10 GeV with a tabletop device in just a few years.

The plasma wakefield accelerator technique was first proposed in the late 1970s, and demonstrated in the laboratory in the late 1980s. Major physics facilities such as SLAC, Lawrence Berkeley National Laboratory, also in California, along with several others, are all working on their own tabletop accelerators.

Such devices are best suited for producing electrons, Downer said, "because they can catch and ride the fast laser-driven plasma waves much more readily than heavier particles."

However, a similar laser-plasma technique is also being developed to accelerate protons in a bid to develop a desktop-size proton accelerator. If it works, it would dramatically downsize the cyclotrons and synchrotrons currently used for proton cancer therapy, which are the size of a football field.

The research into advanced acceleration technologies will be critical to reducing the cost and improving the performance of future accelerators,Tor Raubenheimer, a professor of accelerator physics from SLAC, who was not involved in the current study, told TechNewsDaily

Goodbye, LHC?
Could tabletop electron boosters one day send mega accelerators such as the Large Hadron Collider to the scrapheap?

Downer doesn't think so. "Laser-plasma accelerators cannot hold a candle to these high-end TeV-class accelerators, nor can I say that they ever will, although it is theoretically possible," he said.

"But our experiment will be able, with further refinements, to perform some of the tasks that somewhat smaller machines carry out, especially the production of short, high-brightness X-rays that are widely used in biology, chemistry and material science." [See also: X-Ray Laser Able to Snap Photos of Electrons]

In other words, the tabletop model can replace the stadium-size accelerators found, for example, at universities such as UCLA and Oxford, which produce high-energy particles used to study matter with atomic precision.

"Scientists line up for years to do experiments at accelerator-driven X-ray sources like SLAC and FLASH, but they are large and very expensive facilities, and that's where I think we have a niche," Downer said.

"The goal is not to replace those facilities, but to provide a much smaller and less expensive way to perform some of their tasks in smaller, university-scale labs that biologists, chemists and material scientists usually work in."