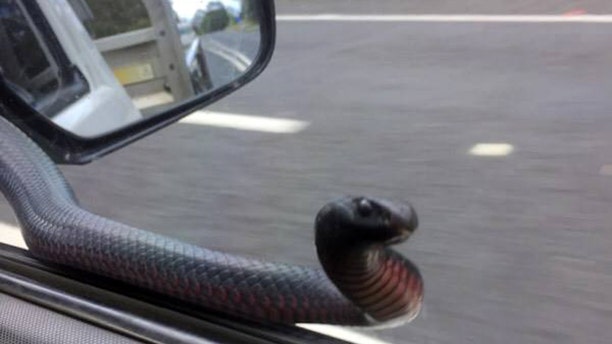 A man had the surprise of his life when he spotted this slippery hitchhiker tapping on his car window. Ted Ogier was heading back from a job on the NSW South Coast when a red-bellied black snake crawled out of his engine and wrapped itself around his driver’s-side window.

As Ogier continued driving, the red-bellied black snake started tapping on his window.

“It’d come out from under the engine bay under the bonnet. It was probably a bit warm there,” Ogier told ABC News.

“It was sort of tapping on the window a couple of times, because it obviously wanted to get in.”

Ogier put in a quick call to his co-worker Kai Pearse who put his amateur snake wrangling skills, and the broom in his car, to good use.

“I just had a broom in the back of the ute and … basically just got him off the car nice and safely, and just ushered him into the bushland off on the side of the road,” Pearse told the publication.

It isn’t uncommon for snakes to curl up in car engines, especially to keep themselves warm overnight, which the pair speculate their red-bellied black snake was doing.

“Last night it got a bit cold down here on the South Coast, so I think he’s got up into the engine bay of the vehicle, and he sat up on the engine to keep himself warm,” Pearse said.

But, when the engine starts running, things get a little too hot — and the snake starts looking for somewhere else.

Despite the pair estimating the snake was at least 2.5m long, Ogier said he’d take his slippery hitchhiker over a spider any day.

“Not as frightening as getting a spider on the inside — spiders are one thing I don’t like, but I don’t like snakes either,” he said.

The post has since gone viral on Facebook with plenty of commenters saying their reaction would’ve been a little less relaxed.

Another person said seeing something like that is “when you’re glad you have the windows up!”

“Holy hell red-belly, I would just run off the road or try to speed off in hope it falls off and doesn’t go up under the car — my heart would stop!” another commenter wrote.

Sydney man Michael Garbutt was out for an afternoon walk just after Christmas when he noticed someone had left a note on his windscreen.

“This afternoon a red belly slithered up into your front left tyre. Please be careful,” a good Samaritan had written to him.

Carefully lifting the bonnet, Garbutt spotted, as the note had warned, a red-bellied black snake curled in the engine.

The high school teacher carefully closed the bonnet, with his little friend still inside, and called Andrew Melrose from Shire Snake Catchers.

Melrose rushed to the scene but realised the rescue wasn’t going to be an easy one.

“It took about an hour for the snake catcher to coax it out. The snake was trying to bite the snake hook. The guy ended up catching it with his hand and just chucked it in a bag,” Garbutt told the Sydney Morning Herald.