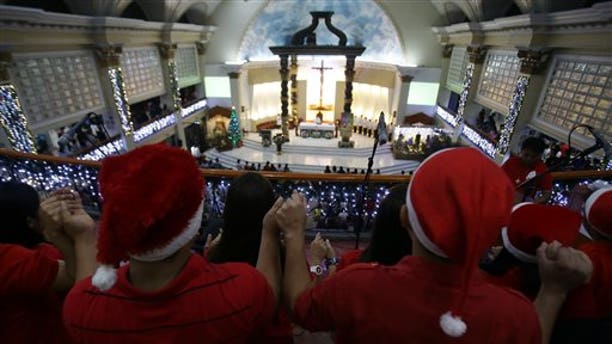 A Filipino Catholics choir hold hands as they sing during the first of nine daily dawn Masses before Christmas day at the St. Peter Parish in suburban Quezon city, north of Manila, Philippines on Wednesday, Dec. 16, 2015. This centuries-old tradition was said to have been started by farmers who wanted to fulfill their religious obligation before the day's work in the field. Christmas is the longest holiday celebration in this predominantly Roman Catholic nation.(AP Photo/Aaron Favila)

Philippine Roman Catholic Church officials have reprimanded a priest for riding a hoverboard and singing a song during Christmas Eve Mass.

The Diocese of San Pablo, south of Manila, said the Rev. Albert San Jose apologized for his action, which was caught on video and widely shared on YouTube.

The video shows the priest in a white cassock gliding up and down the church's aisles on the two-wheeled electric scooter while singing a Christmas song. Some members of the surprised congregation applaud as he pivots and moves backward.

The performance came just before the final blessing in the Mass at the church in Binan city in Laguna province.

"That was wrong," the diocese said in a statement late Tuesday, emphasizing that celebrating the Mass is the church's "highest form" of worship and "demands utmost respect and reverence."

"It is not a personal celebration where one can capriciously introduce something to get the attention of the people," it said.

The priest could not immediately be reached for comment.

Philippine church officials have urged priests to live simply and humbly as they minister to the poor in the Asian bastion of Catholicism, especially under the leadership of Pope Francis, who is known for his frugal lifestyle.