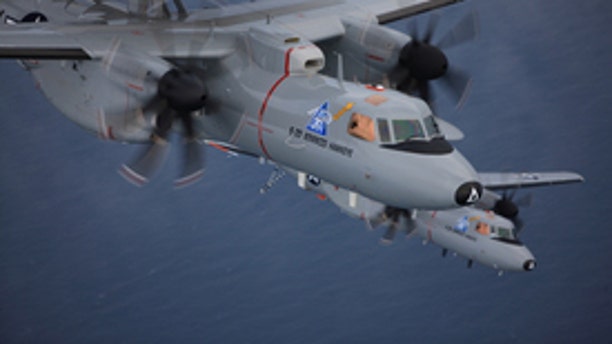 Northrop Grumman's E-2D Advanced Hawkeye provides the Navy fleet with next-generation eyes. It can help manage missions, keep carrier battle groups out of harm’s way, and sweep ahead of a strike.

The latest variant of this airborne early warning command and control platform has just reported for duty. Last month the Navy announced that the first operational squadron is ready to start deployment prep with E-2D Hawkeye aircraft.

And it will provide 360-degree surveillance for American warfighters.

How is it more advanced?

The newest Hawkeye has significantly evolved since the earlier E-2 models, with the new, more powerful, AN/APY-9 radar system among its standout capabilities.

Northrop Grumman describes Hawkeye’s radar technology, improved data processing, and communications as not just next generation, but a two-generation jump ahead.

These advances give warfighters the ability to see more targets at much further distances.

The radar can also operate well in a cluttered and electronically jammed war environment.

Hawkeye E-2D also features other advances, such as a new mission computer and tactical workstations, as well as advanced identification friend or foe system.

Hawkeye can be deployed for a range of tasks, from missile defense through to border security.  It supports unprecedented response to time-critical threats.

The Advanced Hawkeye will play a role in the Navy’s Sea Power 21 strategy as air missile defense within the ‘Sea Shield’ defensive component of the strategy.

And as part of ‘Sea Strike,’ the offensive portion of Sea Power 21, Hawkeye can provide advanced detection and tracking for operations in land and littoral, or coastal, environments.

With its open-architecture network connectivity, it can act as a FORCEnet enabler and help coordinate time-critical targeting and strike operations. FORCEnet is the naval command and control component of Sea Power 21.

Hawkeye’s combined capabilities are a big advantage in defending and protecting U.S. forces in coastal areas and on land.

Well-concealed enemy launchers firing high-speed missiles that fly low with low signatures can be a threat. This type of threat often means that forces have very little reaction time once a missile breaks on the radar horizon.

For forces operating in littoral environments, safe access is crucial. The more common these advanced cruise missiles become, the more a solution like Hawkeye becomes important.

With its unprecedented detection capabilities, Hawkeye is the first within the distributed missile defense network to detect a cruise missile launched from a mobile ground system.

In a scenario where adversaries suddenly gain possession of missiles, Hawkeye can detect the threat and use FORCEnet communications to notify an Aegis missile cruiser of a launched threat. Aegis then receives ongoing continuous data to help it destroy the missile.

The aircraft system can help exactly locate and identify an adversary’s launch system.  It does so by simultaneously collaborating with various assets like satellite surveillance.

Or Hawkeye can help to destroy a launcher before a second attack or after it relocates. For example, Hawkeye can also be used to work closely with manned strike aircraft. Hawkeye can relay critical data to support the accuracy of their precision-guided weapons.

Earlier variants of the E-2 Hawkeye have already played many essential roles in both military and humanitarian operations.  They have supported the U.S. Navy as well as partners like the Japan Air Self-Defense Force and the French Navy.