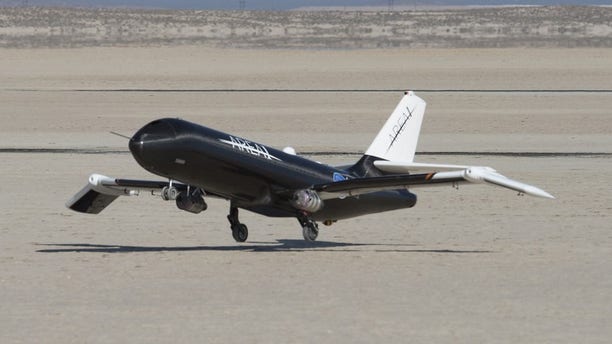 NASA used a remotely-controlled flight testbed called Prototype Technology-Evaluation Research Aircraft, or PTERA, to test the shape memory alloy. PTERA was designed and built by Area-I, and can be reconfigured to accommodate a wide variety of flight experiments. Credits: NASA / Ken Ulbrich

In space, NASA is grappling with potential ISS funding issues, but on Earth, the agency is working hard to improve the efficiency of flight via wings that can fold while an aircraft is flying.

It's called the Spanwise Adaptive Wing project (SAW), a collaboration between NASA, Langley Research Center, Boeing, and Area-I Inc. SAW rethinks the standard fixed-wing designs seen on most aircraft today to instead allows the outer sections to fold up or down through multiple angles.

Folding wings aren't a new idea, but achieving them using a lightweight system is. SAW manages to be very lightweight through its use of shape memory alloy built into an actuator. Because it's light, it's possible to change the angle of the fold during flight, allowing the wings to be adjusted to the most optimal angles dependent on conditions.

There is potential for the folding wing to bring benefits to both subsonic and supersonic flight. For subsonic aircraft, which accounts for commercial airliners, the folding wings allow for better aerodynamics leading to increased control. That in turn means less reliance on some of the heavier parts of existing aircraft such as the tail rudder. The end result is a more efficient aircraft, less fuel use, a better experience in unfavorable weather (wind gusts), and the ability to use longer wings as they can be folded when on the ground.

For supersonic flight, there's even greater potential mainly because the wing tips can be folded downward allowing the aircraft to "ride the wave in supersonic flight" according to SAW Principal Investigator Matt Moholt. That leads to reduced drag and better performance when transitioning from subsonic to supersonic speeds.

Interestingly, the shape memory alloy can be automatically triggered by changes in temperature, which leads to a rotation change and therefore automatic efficiency gains.

Further testing will be carried out in the summer, at which point the folding wings will be capable of 70 degrees of rotation either up or down. After that, NASA wants to fit SAW to an F-18.