Meet the teenager who designed a safer nuclear power plant 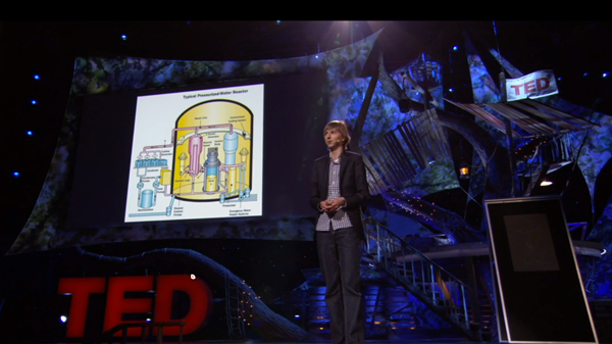 Do nuclear power plants need a redesign? Critics of nuclear energy seem to think so, and so does nuclear energy advocate, Taylor Wilson. A physics wunderkind, Wilson became the youngest person to ever create fusion at age 14. And since graduating from high school last year, he's devoted himself to finding innovative solutions to the world's biggest problems.

The now nineteen-year-old Wilson recently spoke to a TED audience about his design for a small, modular fission reactor that is both less expensive and much safer to operate than today's nuclear reactors.

Its assembly-line construction, 30-year fuel life and low usage cost make Wilson's reactor an ideal source of electricity for both developing nations and space explorers, according to the young scientist.

To get an idea of how today's nuclear reactors work, Wilson first explained to his listeners at TED how electricity is produced using a steam turbine. In a steam turbine system, water boils and turns to steam, which turns the turbine and creates electricity.

Nuclear fission, Wilson said, is really just a fancy tool for getting the water in a steam turbine system to boil quickly and steadily.

Today's nuclear power plants produce steam for their turbines using pressurized-water reactors — or big pots of water under high pressure — which are heated up with help from uranium dioxide fuel rods encased in zirconium. These rods control and maintain the nuclear fission reaction.

When nuclear power was first used to heat water in a turbine system, it was a big advancement in existing technology. But Wilson said his idea for a redesign stemmed from the suspicion that it wasn't really the best way to do it.

"Is fission kind of played out, or is there something left to innovate here?" Wilson said he asked himself. "And I realized that I had hit upon something that I think has this huge potential to change the world."

Instead of finding a new way to boil water, Wilson's compact, molten salt reactor found a way to heat up gas. That is, really heat it up.

Wilson's fission reactor operates at 600 to 700 degrees Celsius. And because the laws of thermodynamics say that high temperatures lead to high efficiencies, this reactor is 45 to 50 percent efficient.

Traditional steam turbine systems are only 30 to 35 percent efficient because their reactors run at low temperatures of about 200 to 300 degrees Celsius.

And Wilson's reactor isn't just hot, it's also powerful. Despite its small size, the reactor generates between 50 and 100 megawatts of electricity, which is enough to power anywhere from 25,000 to 100,000 homes, according to Wilson.

Another innovative component of Wilson's take on nuclear fission is its source of fuel. The molten salt reactor runs off of "down-blended weapons pits." In other words, all the highly enriched uranium and weapons-grade plutonium collecting dust since the Cold War could be put to use for peaceful purposes.

And unlike traditional nuclear power plants, Wilson's miniature power plants would be buried below ground, making them a boon for security advocates.

According to Wilson, his reactor only needs to be refueled every 30 years, compared to the 18-month fuel cycle of most power plants. This means they can be sealed up underground for a long time, decreasing the risk of proliferation.

Wilson's reactor is also less prone to proliferation because it doesn't operate at high pressure like today's pressurized-water reactors or use ceramic control rods, which release hydrogen when heated and lead to explosions during nuclear power plant accidents, like the one at Fukushima in 2011.

In the event of an accident in one of Wilson's reactors, the fuel from the core would drain into a "sub-critical" setting- or tank- underneath the reactor, which neutralizes the reaction. The worst that could happen, according to Wilson, is that the reactor is destroyed.

"But we're not going to contaminate large quantities of land," said Wilson. "So I really think that in the, say, 20 years it's going to take us to get fusion and make fusion a reality, this could be the source of energy that provides carbon-free electricity."