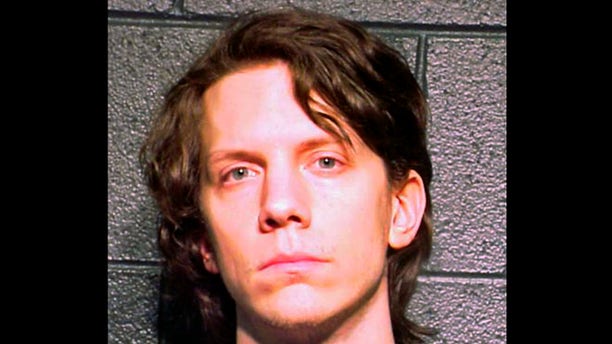 Jeremy Hammond, 27, seen in a 2012 appearance in federal court, where he was accused of participating in an international computer-hacking ring. On May 28, 2013, he plead guilty to the charges. (Cook County Sheriff's Department)

"For each of these hacks, I knew what I was doing was wrong," Jeremy Hammond told a judge in federal court in Manhattan.

Prosecutors had alleged the cyber-attacks were carried out by Anonymous, the loosely organized worldwide hacking group that stole confidential information, defaced websites and temporarily put some victims out of business. Hammond was caught last year with the help of Hector Xavier Monsegur, a famous hacker known as Sabu who later helped law enforcement infiltrate Anonymous.

A criminal complaint had accused Hammond of pilfering information of more than 850,000 people via his attack on Austin, Texas-based Strategic Forecasting Inc., a publisher of geopolitical information also known as Stratfor. He also was accused of using the credit card numbers of Stratfor clients to make charges of at least $700,000. He allegedly bragged he even snared the personal data of a former U.S. vice president and one-time CIA director.

During his guilty plea, Hammond admitted he "took confidential information" from law enforcement agencies and contractors in several states.

Hammond, 28, once rallied against plans to hold the 2016 Olympics in Chicago because he felt it would hurt low-income people; another time, he protested against neo-Nazi groups.

In a 2005 feature article about Hammond's hacking skills, he told the Chicago Reader he could program video games before he was 10. He told the paper he was a "hacktivist" who sought to promote causes but never for profit.

A website for supporters, freehammond.com, has described Hammond as "one of the few true electronic Robin Hoods."

But prosecutors called him a menace: In one alleged online chat, regarding Stratfor, Hammond allegedly wrote, "Time to feast upon their [email databases]."

Hammond, who used online aliases such as "crediblethreat" and "yohoho," once described himself as "an anarchist communist," the complaint says.

He has been previously been arrested for marijuana possession and involvement in a protest where an Olympic banner was torn down, according to court papers.

Hammond faces a maximum sentence of more than 15 years at sentencing on Sept. 6.

"Jeremy has taken responsibility for what he's done, but he should not face such a harsh sentence for an act of protest from which he did not personally benefit," the defendant's brother, Jason Hammond, said in a statement. "I'm glad he's moved one step closer to freedom, but today I'm asking for the judge to consider a sentence appropriate to what is nothing other than a nonviolent political protest."