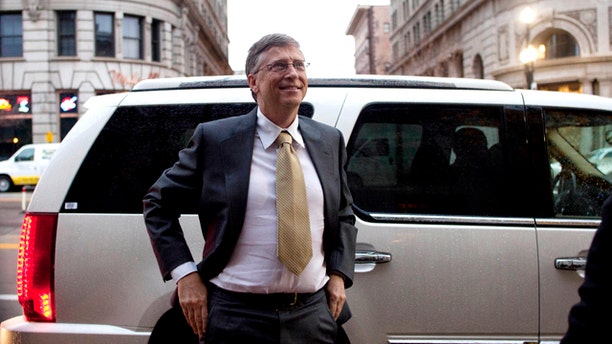 Nov. 21, 2011: Microsoft founder Bill Gates arrives at the Frank E. Moss federal courthouse in Salt Lake City to testify in a $1B antitrust lawsuit brought by Novell Inc. Gates, wearing a gray suit and a yellow tie, was the first witness as Microsoft lawyers presented their case in a trial that's been ongoing for about a month. (AP Photo/Jim Urquhart)

A federal jury on Friday failed to reach a verdict in a company's $1 billion antitrust lawsuit against Microsoft Corp. in a case so important to the computer giant that it put Bill Gates on the stand for two days last month.

Novell Inc. of Utah sued the software giant in 2004, claiming Microsoft duped it into developing the once-popular WordPerfect writing program for Windows 95 only to pull the plug so Microsoft could gain market share with its own product.

Novell says it was later forced to sell WordPerfect for a $1.2 billion loss.

The trial began two months ago with jurors getting the case on Wednesday. After much confusion, and some perplexing questions from the panel, they told U.S. District Judge J. Frederick Motz they were deadlocked by early Friday evening.

He repeatedly asked them if they could keep trying.

"This has been a very long and expensive case," Motz told the panel.

Novell attorneys pleaded with Motz to give the panel just one more day. In the end, however, the 12 jurors told the judge they were "hopelessly" deadlocked, and they later told lawyers a single holdout refused to vote in Novell's favor.

"He had strongly held views about the technical evidence and refused to budge," Novell attorney Jeffrey Johnson said. Jurors offered no comment after the trial.

Novell was left with little to show for a decade of effort, but the company said it will seek to retry the case with a new jury.

"Although it's a technically complicated case, we're hoping to convince another jury that our claims have merit," Novell's corporate counsel Jim Lundberg said.

Microsoft said it would file a motion asking the judge to dismiss Novell's complaint for good and avoid a second trial.

"We remain confident that Novell's claims don't have any merit and look forward to the next steps in the process," said Steven Aeschbacher, Microsoft's associate general counsel.

Novell waited until 10 years after Microsoft left WordPerfect behind to file the lawsuit. The company said it was waiting for the U.S. government's antitrust enforcement against Microsoft to wrap up. At first Novell's case was dismissed, but it was later reinstated on appeal.

Microsoft lawyers have argued that Novell's loss of market share was its own doing because the company didn't develop a compatible WordPerfect program until long after the rollout of Windows 95. WordPerfect once had nearly 50 percent of the market for word processing, but its share quickly plummeted to less than 10 percent as Microsoft's own Office programs took hold.

Gates testified last month that he had no idea his decision to drop a tool for outside developers would sidetrack Novell. Gates said he was acting to protect Windows 95 and future versions from crashing.

He said that the company's preferred Word software was superior to WordPerfect, which was a "bulky, slow, buggy product" that did not integrate well with Windows 95.

Novell could have worked around the problem but failed to react quickly, he said.

Novell has argued that Gates ordered Microsoft engineers to reject WordPerfect as a Windows 95 word processing application because he feared it was too good.

Novell's lawsuit is the last major private antitrust case to follow the settlement of a federal antitrust enforcement action against Microsoft more than eight years ago.

Novell is now a wholly owned subsidiary of The Attachmate Group, the result of a merger that was completed earlier this year.