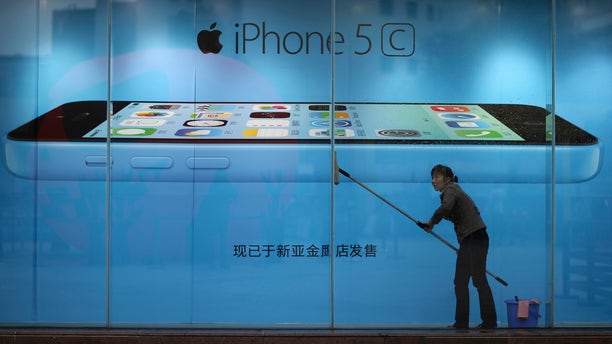 A worker cleans glass in front of an iPhone 5C advertisement at an apple store in Kunming, Yunnan province, in this October 27, 2013 file picture. (REUTERS/Wong Campion)

Clear the decks, the iPhone 6 is on the way.

In a bid to get rid of old iPhone stock before Apple launches the next iteration of its handset, Walmart has moved to slash the cost of the 5C model, making it even more wallet-friendly than before. The 5S has also been discounted.

The deal, which will reportedly run for 90 days, applies when you sign up for a two-year contract with AT&T, Sprint, Verizon, or US Cellular.

However, with the offer running for 90 days, and the iPhone 6 expected to launch next month, consumers interested in an Apple smartphone would be better off waiting to see how the market looks once Tim Cook has finished his spiel. The likelihood is you’ll be presented with an even better deal on the 5C and 5S, or you might even be tempted to go for the new model.

Though we know nothing for certain about the iPhone 6 – this is Apple we’re talking about, after all – recent leaks, rumors, and speculation suggest the tech powerhouse is on the verge of rolling out two devices, both sporting bigger displays than those of the current iPhones.

The expected 4.7-inch version is believed to be ready for a full launch, while a number of reports have suggested the rumored 5.5-inch alternative has been experiencing technical difficulties and therefore might not land for a few more months.. If it does launch at the same time as the smaller version, supplies may at first be limited.

Expecting the big-screen models to be a hit with consumers, Apple has reportedly ordered between 70 and 80 million units, with suppliers apparently under pressure to complete the order before the end of the year.

For the very latest information on everything we know about the iPhone 6, be sure to check out DT’s dedicated page here.