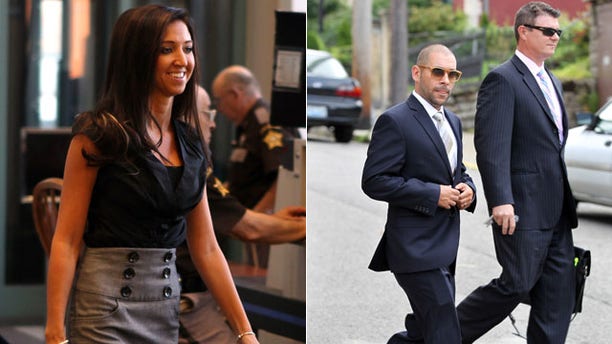 These photos show, Sarah Jones (left), a former Dixie Heights High School teacher and Cincinnati Ben-Gal cheerleader; and Nik Richie, owner of the gossip website TheDirty.com, leaving the Federal Courthouse in Covington, Ky., with his lawyer, David Gingra. Jones, who was convicted of having sex with her 17-year-old student three months ago, is suing a controversial Scottsdale, Ariz.-based gossip website and its owner over lewd comments made about her online long before any accusations involving the teenager surfaced. (AP Photos)

From Twitter and Facebook to Amazon and Google, the biggest names of the Internet are blasting a federal judge's decision allowing an Arizona-based gossip website to be sued for defamation by a former Cincinnati Bengals cheerleader convicted of having sex with a teenager.

In court briefs recently filed in the 6th U.S. Circuit Court of Appeals in Cincinnati, the Internet giants warn that if upheld, the northern Kentucky judge's ruling to let the former cheerleader's lawsuit proceed has the potential to "significantly chill online speech" and undermine a law passed by Congress in 1996 that provides broad immunity to websites.

"If websites are subject to liability for failing to remove third-party content whenever someone objects, they will be subject to the 'heckler's veto,' giving anyone who complains unfettered power to censor speech," according to briefs filed Nov. 19 by lawyers for Facebook, Google, Microsoft, Twitter, Amazon, Gawker and BuzzFeed, among others.

Those heavy hitters "really tell you how major of an issue this is," said David Gingras, attorney for Scottsdale, Ariz.-based thedirty.com and its owner, Nik Richie, 34, who lives in Orange County, Calif.

The case centers on the federal Communications Decency Act, passed in 1996 to help foster growth and free speech on the Internet by providing immunity from liability to websites for content posted by their users. The law also was designed to encourage websites to self-police offensive material.

Judges and appeals courts across the country have upheld the law in hundreds of cases.

His website, thedirty.com, allows users to submit posts — anonymously if they want — about anyone from the girl next door to professional athletes and politicians, often accusing them of promiscuity, cheating on their spouses or getting plastic surgery or picking apart their looks. Richie screens each post, decides what goes up and often adds his own commentary.

Most recently, Richie broke the news of Anthony Weiner's latest round of marital indiscretions.

In December 2012, former Bengals cheerleader Sarah Jones, 28, also a former high school teacher in northern Kentucky, sued Richie over posts concerning the sexual history of her and her ex-husband. Jones said the posts were untrue and caused her severe mental anguish and embarrassment.

Richie said that the posts were submitted to him anonymously and that it was not up to him to judge their accuracy. He simply posted them and added a comment about high school teachers and sex.

In July, after federal Judge William Bertelsman allowed the lawsuit to proceed, jurors found that the posts about Jones were substantially false and Richie had acted with malice or reckless disregard by publishing them, and they awarded Jones $338,000.

Richie is asking the 6th Circuit to find that Bertelsman should never have allowed the case to proceed, which would nullify the jury's verdict.

Oral arguments in the case will be held in Cincinnati, likely in the beginning of 2014, with a decision expected in the summer.

Gingras, other attorneys specializing in Internet law and civil rights groups criticize Bertelsman's ruling as based on his own personal distaste of thedirty.com and not on legal precedent.

Bertelsman ruled four separate times in the case against arguments over the Communications Decency Act, finding that the very name of Richie's website, the way he manages it and the personal comments that he adds all encourage offensive content.

Richie's own commentary about the Jones posts effectively validated all the anonymous accusations against her, Bertelsman said.

The posts about Jones were unrelated to a criminal case that emerged against her in March 2012 in which she was accused of having sex with her former student, a teenager. Jones later pleaded guilty to sexual misconduct and custodial interference as part of a plea deal that allowed her to avoid jail time but prohibited her from teaching again.

Jones and the student, then 17, are still together and say they're in love and engaged to be married.