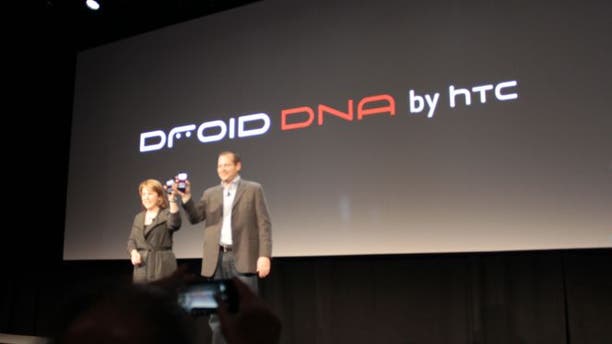 The rumors were true: The star of HTC and Verizon's big event today is an appropriately large phone, the long-rumored HTC Droid DNA. HTC's first 5-inch handset to hit stateside, the HTC DNA fills all that space with a 1080p resolution packed in at 440 pixels-per-inch -- a U.S. first for any phone.

HTC says "We put a ton of work into optimizing this display for how you use it every day." That translates into a layer of Gorilla Glass 2 that seamlessly curves and blends into the phone's bezel, as well as 80-degree viewing angles and a screen that HTC claims is 50 percent brighter than the Galaxy S III.

Despite the big screen size, HTC says the Droid DNA is a smartphone, "not a phablet." It's made to be thing and light, with a similar design profile to the HTC One X. The red sidewalls and accents hint at the Droid heritage, highlighted bya grippable grille inspired by a Lamborghini's engine.

The monster specs don't stop with the Super LCD 2 display, however. A quad-core Qualcomm Snapdragon S4 processor roars underneath the hood, augmented by 2GB of RAM. The 8-megapixel rear camera includes a "best-in-class" f/2.0 lens, as does the 2.1MP front camera. The front camera also includes an 88-degree ultra-wide lens for better snapping of group shots.

The phone runs on Android Jelly Bean 4.1 overlaid with HTC's own Sense 4 Plus skin, which adds better face detection, smile capture and HDR imaging. Sightseeing mode puts your camera on alert so it goes straight to camera when you hit the power button, while a new photo grallery lets you view your photos by event or location. You can easily create or rename an album or copy amd move photos between albums.

HTC didn't skimp on the feature side, either. Like many of the flagship Windows Phones released in recent days, the HTC DNA includes wireless charging capabilities. The Droid DNA also comes with beats audio with two built-in amplifiers, one for the headphones and one for the speaker -- which should be loud. Earlier this month, Beats announced the Beats Pill portable speakers which will be a “pefect match” for the Droid DNA.

Added together, the powerful components, hi-def display and abundant features should make the HTC Droid DNA one of the more compelling hero phones on the market, and HTC knows it. "“It’s not only the sleekiest and most powerful droid ever,” said Jason Boller, HTC's design manager. “It’s simply the most advanced phone on the market.”