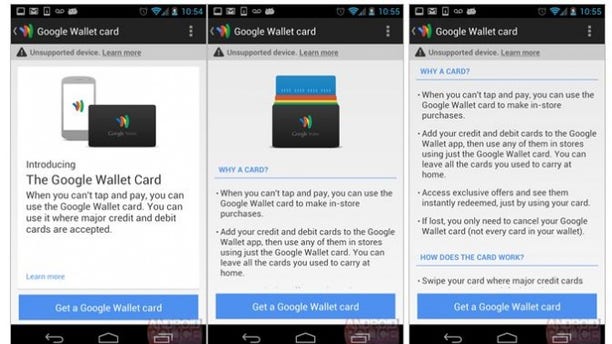 The idea behind mobile payments currently holds more appeal than the reality. Retailer support is hard to find outside major metropolitan areas, and even then, the gaggle of tap-to-pay options means your favorite NFC-friendly store may not accept your preferred mobile wallet technology. If a new leak proves true, Google may have worked its way around the hurdle, albeit in an NFC-free manner. The company is reportedly working on a physical Google Wallet card that functions as an all-in-one card, letting you pay with whatever credit cards are tied to your Google Wallet account.

The solution would be inelegant, but according to the tipster who sent Android Police screenshots of the leaked app, the solution will work wherever those credit cards are accepted, regardless of whether or not the retailer supports Google Wallet's tap-to-pay technology. Since Google's mobile payment service now supports all major credit cards, you could theoretically leave the rest of your plastic at home and travel encumbered only by your Google Wallet card and your smartphone.

The credit account you set as the default in-app is used when you swipe the Google Wallet card at a store. Even better, the leaked screenshots claim that if you lose your Google Wallet card, you'll only need to cancel and swap out that particular piece of plastic, and not all the other credit cards associated with it.

Isis is the child of a joint venture between T-Mobile, AT&T and Verizon Wireless, which explains why Google's Wallet technology is pretty much only found in phones offered by Sprint. Therein lies the further genius of a tangible Google Wallet card; as Android Police points out, Google could publish an NFC-free version of the Wallet app in the Play Store, giving people the opportunity to use Google's credit service-switching card whether or not the tap-to-pay technology is hardwired into their phone. Bye-bye, carrier-backed advantage.

Are the benefits of a service-switching physical card great enough to entice everyday users to sign up for Google Wallet? We'll see when (and if) the leaked Wallet app goes live.