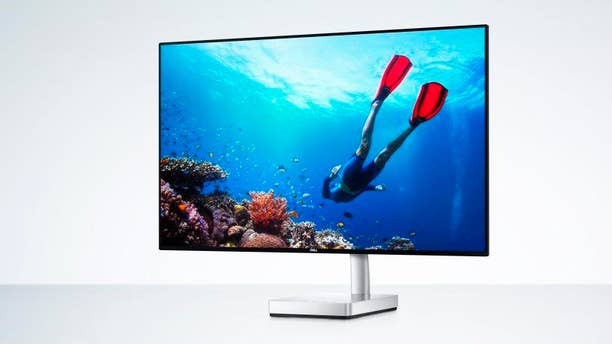 We have reached a point now where making devices thinner is limited only by the thickness of the ports they are expected to include. In the case of smartphones, Apple worked around that problem on the iPhone 7 by removing the headphone jack. For monitors, Dell decided to do the same thing, but instead of removing ports, it moved them.

The 27 Ultrathin Monitor (S2718D) is Dell's latest display, and it boasts the "world's overall thinnest profile." We're all used to fumbling around at the back of a monitor blindly trying to plug in a HDMI, DisplayPort, or DVI cable, so Dell solved that problem and allowed this monitor to be incredibly thin by simply moving those ports to the stand base.

The back of the 27 Ultrathin is devoid of any inputs. It's only as thick as the panel it houses. To plug in your PC or laptop you'll have to navigate to the base of the stand where you'll find a HDMI 2.0 port, USB Type-C port with support for up to 45 watts of power, and an audio jack.

As for the display, it's a 27-inch panel with a resolution of 2,560 by 1,440 running at 60Hz. It supports HDR output, but to a different spec than 4K TVs. Brightness is rated at 400 nits and it supports 99 percent of the sRGB color gamut. The contrast ratio is 1000:1 and the response time is 6ms gray-to-gray. Viewing angles are as expected: 178 degrees.

The monitor looks fragile due to how thin it is, but the hinge on the back is articulated meaning you can tilt and swivel it until you get the perfect angle for your viewing requirements.

Dell will be launching the 27 Ultrathin on March 23 in the US at a cost of $699.99. It will be making an appearance at CES this week, though.