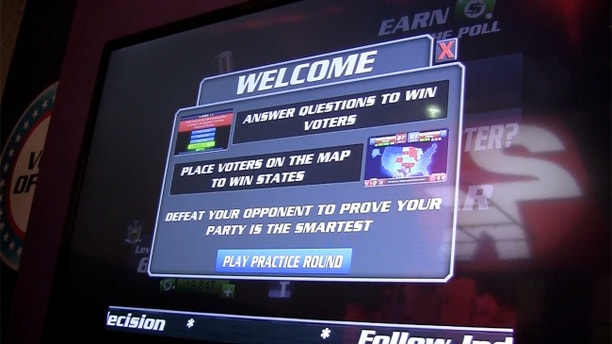 Who's says politics can't be funny? Partnering with Comedy Central, 2K Play, a branch of 2K Games is set to release "Comedy Central's Indecision Game" Set to launch on iOS and Android in two weeks the game seeks to discover who's smarter, Democrats, Republicans or Independents. Combining element of trivia, strategy and some good old fashioned mud-slinging, players can win the election for their candidate.

The game is comprised of two rounds, a trivia round and a map round. During the trivia round, players are asked three questions about the current presidential candidates as well as past presidents. If those rare cases you become stuck on a question, there are three political lifelines similar to the ones used in "Who Wants to Be a Millionaire?" However to use the lifelines, you have to spend some greenbacks, the in-game currency. Greenbacks can be earned by playing the game or purchasing them in the in-game store.

If a player wins the round, the are awarded a number of votes while the user only earns one pity vote. In the next round, players are presented with a map with the goal to win as many states as possible for your candidate. To successfully win a state, a user must place their votes in the state and win by majority. In a not-so-subtle allegory, states can also be won with strategic use of greenbacks.

Similar to the trivia round, greenbacks can purchase some helpful abilities such as smear campaigns to slow your opponent's progression. You can also shorten your opponent's turn, preventing them from lacing all their votes. During our playthrough, we took West Virginia 6 votes to 3. However we were able to steal Washington D.C and New Jersey with a well-timed smear campaign.

We also had a chance to take a look at the in-game store during our playthrough. Comprised of various hats, shirts and accessories, there's a high level of customization that's sure to keep players spending those hard-earned greenbacks. In an interesting wrinkle, Comedy Central will also be adding random polls throughout the game. Primarily lighthearted, the answers will serve as a window into American's perspective about the American political system. There was no word on how the answers to the polls would be used, but we wouldn't be surprised if they ended up on Comedy Central in some shape, form or fashion.