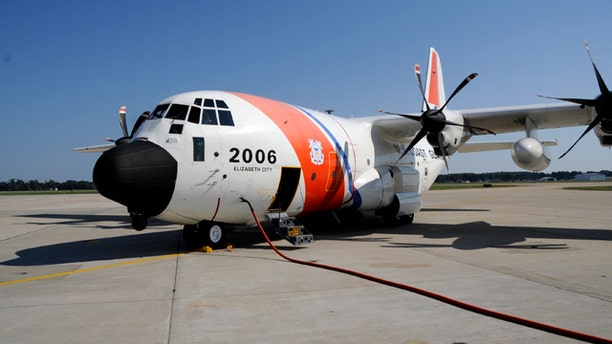 A Coast Guard C-130 Hercules airplane is prepped for a search and rescue patrol at Air Station Elizabeth City, Aug. 31, 2010. The crew of the C-130 broadcasted a warning message to boating and shipping traffic from the northern tip of New Jersey to the southern border of North Carolina. (U.S. Coast Guard / Petty Officer 3rd Class David Weydert)

Earl is moving up the East Coast, and the U.S. Coast Guard is getting ready, moving hundreds of thousands of tons of planes, boats and rescue gear into position. The Guard hopes for the best -- and prepares for the worst.

The National Hurricane Center in Miami expanded its hurricane warning Thursday to include part of the Massachusetts coast, in addition to the Mid-Atlantic, as Hurricane Earl starts to make its way up the East Coast. In response, the Coast Guard is doubling its crew in the areas, and relocating planes and vessels to be used over the next several days, representatives told FoxNews.com.

He said the Guard was bracing itself, much as you would secure your own oxygen mask first during an airplane emergency before helping others. This includes boarding up regional bases, arranging alternative operation centers and mobilizing rescue vessels and aircraft so they can be fully operational when the time comes.

Part of that process: Rolling the big planes to safety. The Guard identifies secondary flight centers and moves airships such as the 75,000-pound C-130 Hercules to them during the storm. They can then head out on the heels of the storm as it passes to rescue survivors.

"It’s always a bad situation to have to rescue the rescuers," Clayton said.

If Earl prompts an increased number of distress calls -- or makes landfall, which could be even worse -- the Guard "flies in behind the storm as it passes" to assist, explained Lt. Bruce Jeffries, a public affairs officer with the Coast Guard. Some of the tools of their trade: cutters 200 feet long and longer, 47-foot-long surf boats that can capsize and keep going, and life-giving helicopters.

"As you saw in Katrina, we do hoists for people that are stranded," said Clayton, "but that’s only in instances of severe flooding, and by presidential order. Our primary rescue efforts are achieved via cutters."

Much has changed since 1790, when the U.S. Coast Guard was founded.

"When a hurricane hit then, we would use row boats instead of cutters to assist distressed boaters," Clayton told FoxNews.com. "It’s quite a history."

While Earl parries the coast, that history will continue. The Guard must stay busy with its regular quota of distress calls and patrol flights. But it will combine those missions with hurricane reconnaissance for everyday mariners as well.

"Today we have a patrol flight for fisheries," explained Jeffries. "But we’ve combined that patrol with storm-tracking functions -- recording weather observations to help with forecasting and making calls to boaters with updated information on conditions of the storm. This is especially helpful for those without long-distance radios."

While the hurricane remains at sea, the Guard focuses on informing the public and media about the dangers of boating and swimming during the storm, including riptide warnings -- and encouraging people to secure and label all belongings on their vessels with contact information, should any loose ends succumb to the winds gusting at 140mph, 150mph or more.

In other words, keeping people out of harm’s way is half the battle.

Once every individual, ship and vessel is accounted for after a storm passes, the Guard also works with states to assists in damage assessment, not to mention licking their many wounds. There are always runways to be cleared, equipment to be repaired, and supplies that need to be replenished, said Jeffries.

Often, it’s easy to overlook what the Coast Guard does on a day-to-day basis, especially in light of good weather.

But even after a hurricane passes, their deployment continues indefinitely. "The Coast Guard is never done doing search and rescue," said Officer Clayton, who works alongside some 42,000 men and women on active duty, 7,500 reservists, and more than 30,000 volunteer auxiliarists.

"It’s what we’re trained to do. It’s where your taxes go. It’s our motto: Always prepared."