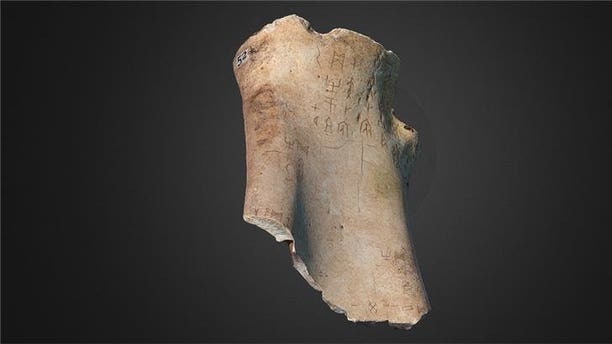 Scientists have turned to 3D technology typically used in hospitals to scan and print the earliest example of Chinese writing, 3,000-year-old object written on bones of an ox.

Dating back to 1339-1112 BC, the object is among hundreds of what are called oracle bones held by the Cambridge University Library. They are written on ox shoulder blades and the flat under-part of turtles and offer a record of questions posed to the divination at the court of the royal house of Shang, which ruled north central China at the time.

The inscriptions on the bone – believed to be the first 3D print of an oracle bone -  provides scientists a rare glimpse into early Chinese society, such as warfare, agriculture, hunting, medical problems, meteorology and astronomy. Included in the writings is a record of a lunar eclipse dated to 1192 BC, one of the earliest such accounts in any civilization.

"The oracle bones are three-dimensional objects, and high-resolution 3D imagery reveals features which not only all previous methods of reproduction (such as drawings, rubbings and photographs) have been unable to do, but which are not even apparent from careful examination of the actual items themselves,” Charles Aylmer, head of the Chinese Department at Cambridge University Library, said in a statement.

Related: Study: 3D printing can be hazardous to your health

"To hold a 3D print of an oracle bone is a very special experience, as it provides the same sensory impression as that obtained by the people who created them over three thousand years ago, but without the risk of harm to the priceless originals," he added.

The high-resolution image of the bone, which measures about 9x14 cm, shows the incised questions on the obverse of the bone as well as the divination pits engraved on the reverse and the scorch marks caused by the application of heat to create the cracks - interpreted as the answers from the spirit world.

In collaboration with the Media Studio of Addenbrooke's Hospital, the print was made with a printer normally used to assist in the planning of maxillofacial and orthopedic surgery.