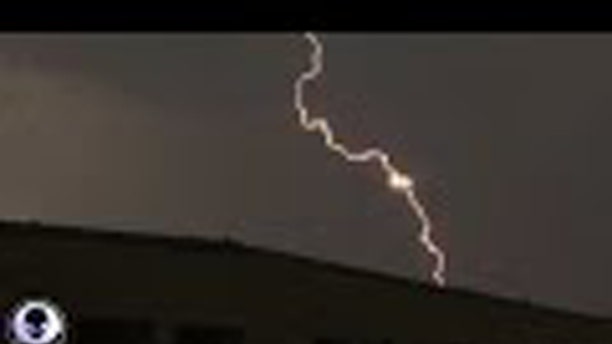 A bizarre YouTube video posted by conspiracy theory channel SecureTeam10 has gone viral as it purportedly shows a UFO sucking energy from a lightning bolt.

The video, entitled "They Dwell in the Lightning," appears to show an object in the sky near a lightning bolt in the Czech Republic. The video was posted 5 days ago and has already racked up nearly 500,000 views.

The herky-jerky footage purportedly shows a "triangular-shaped UFO" following the lightning bolt with ease. Commenters on the video are mixed about what they are seeing, with some claiming it is indeed a UFO, while others believe it's a hoax.

UFO INTRIGUE: HOW THE UK DEAL WITH THE 'REAL-LIFE X-FILES'

"Aliens aren't real, they were invented by Hollywood in the 40's," another wrote.

Several even made references to the "Back to the Future" movies because of a bolt of lightning provided energy to Marty McFly's car. "Doc Brown did it in back to the future, now aliens using bolts to power their vehicles," one commenter wrote.

SecureTeam10, which has its videos narrated by "Tyler Glockner," is known for posting conspiracy theory videos.

STEPHEN HAWKING'S SEARCH FOR ALIENS GETS A BOOST

In the past, the YouTube channel has posted videos purporting to contain an "alien tank" found on the Moon and a giant hole found on Mars could be the work of aliens.

Neither of these instances has ever been confirmed by NASA or any other government agency.