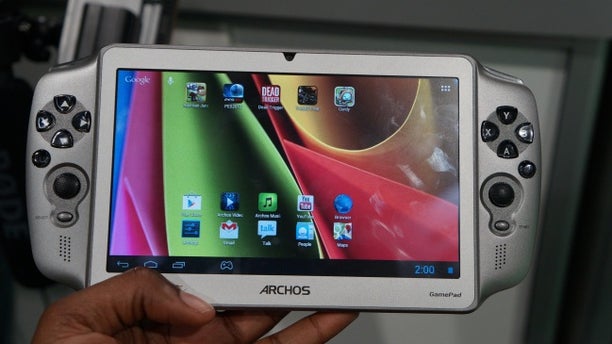 2013 is shaping up to be a great year for Android gaming fans. Archos debuted its new GamePad tablet at CES 2013, hoping to win over the early adopter crowd. In order to stand out from the crowd, Archos is offering its latest tablet at a wallet-friendly $169. But will that be enough to score with gamers?

Compared to other mobile gaming options, the GamePad is shockingly thin and light at 11.6-ounces, 9 x 4.6 x 0.6-inch. The rear panel of the GamePad is gray with a soft touch finish, which allowed us to get a good grip. There's a large Archos insignia, but no rear-facing camera. The front of the tablet holds the 7-inch display above which sits VGA camera. The display is surrounded by 12 programmable buttons and a pair of analog sticks. The top of the GamePad holds a pair of clear shoulder buttons.

While not as crisp as a 1080p display, the GamePad's 1024 x 600p display managed to deliver vibrant color and sharp detail. Powered by a 1.6-GHz dual-core ARM Cortex processor, 1GB of RAM and a quad-core Mali 400 GPU, games such as "Dead Trigger" ran smoothly. As we played through the zombie shoot-em-up, we found that the analog sticks weren't as precise as we would have liked. It took some finagling to line up head shots which is no good when you've got 4 or 5 of the undead bearing down on your position. The d-pad, input and shoulder buttons delivered nice snappy feedback.

The GamePad's most notable feature is its button-mapping capability. When we launched a game, a small game-controller icon would appear along the bottom of the display. Tapping the icon, opened a window asking if we wanted to change our button configuration. Unfortunately we were unable to test this feature in our demo, but it's a compelling feature that many gamers would find useful.

When not playing games, the GamePad functions like any other Android tablet on the market. We navigated the Android 4.1 (Jelly Bean)-powered tablet using the touchscreen, watched a few YouTube videos and visited the Google Play store to find more games.

While not as flashy as some of its other competitors, the $169 Archos GamePad delivers solid gaming at a great price. It's a solid option for mobile gamers that want to take their gaming to the next level.