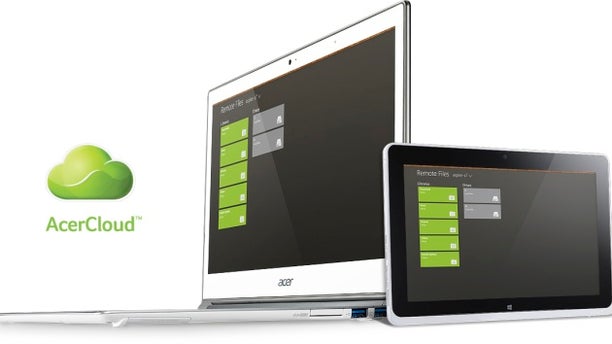 AcerCloud, Acer's personal cloud storage service, is making its way to the top three mobile operating systems this year. The service, which allows users to save files of all types on their home PC and access them via a web connection, is expanding its cross-platform support to iOS , meaning users will be able to share files across their Windows, Android and iOS devices.

For those unfamiliar with the service, AcerCloud allows you to set a PC as a primary storage device, which can then be accessed by other Web-connected, AcerCloud-enabled devices. Prevously, users were only able to access their files on their PCs and Android devices.In addition to the roster expansion, Acer is also rolling out a new Remote Files app for AcerCloud. Using the app, users will be able to access their Windows PCs from any of their AcerCloud-enabled devices via the Web.

Beyond its storage capabilities, AcerCloud is also bringing improvements to AcerCloud Docs, PicStream and and clear.fi. With AcerCloud Docs, users will be able to push Office documents to their Android, iOS and other Windows devices. Similarly, PicStream will allow users to take photos on any AcerCloud-enabled device and automatically push them to their other devices. Photos will be stored for up to 30 days.

AcerCloud's clear.fi is getting an update to allow users to access their photos and stream audio files to any of their AcerCloud devices.

The new AcerCloud will be available as an online update in January. Acer will begin bundling the new version of AcerCloud with all new Acer PCs starting in the second-quarter of 2013.