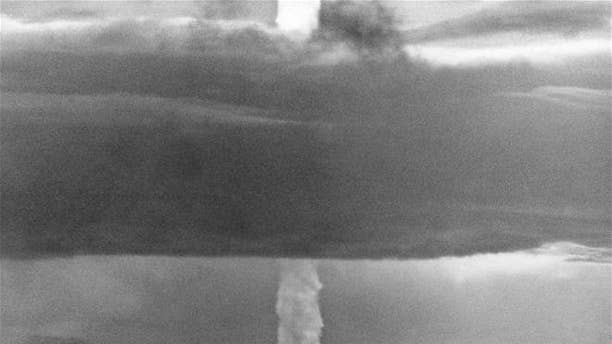 In this May 21, 1956 photo, the stem of a hydrogen bomb moves upward through a heavy cloud after the bomb was detonated over Namu Island in the Bikini Atoll, Marshall Islands. (AP Photo, File)

Seventy years ago, the US dropped 23 nuclear bombs on Bikini Atoll—including one that was more than 1,000 times larger than the bomb dropped on Hiroshima, per the Guardian.

Steve Palumbi calls it "the most destructive thing we have ever done to the ocean." Yet the Stanford marine sciences professor and fellow researchers have found a thriving marine ecosystem in the waters in and around the crater left by the Bikini Atoll nuclear tests.

Palumbi says their study—the first looking in-depth at the effects of radiation on marine life—shows marine life is "remarkably resilient." While there are some signs of mutation in nurse sharks in the area, according to USA Today, hundreds of schools of fish are apparently healthy, as are the giant coconut crabs munching on radioactive coconuts.

Perhaps most impressive is the coral—some of it as big as cars—which appears to have started growing as soon as a decade after the bombings. The coral shows no signs of being cancerous, and researchers hope learning why that is could potentially help humans fight cancer in the future, the Stanford Daily reports.

"The terrible history of Bikini Atoll is an ironic setting for research that might help people live longer," Phys.org quotes Palumbi as saying. The testing on Bikini Atoll rendered it a nuclear wasteland, one that is still unsafe for human habitation, but the bombs may have ultimately helped the coral, fish, and other marine life currently living there.

"In a strange way they are protected by the history of this place ... because they have been left alone," Palumbi tells the Guardian. (Now blowing up on YouTube: secret nuclear test footage.)