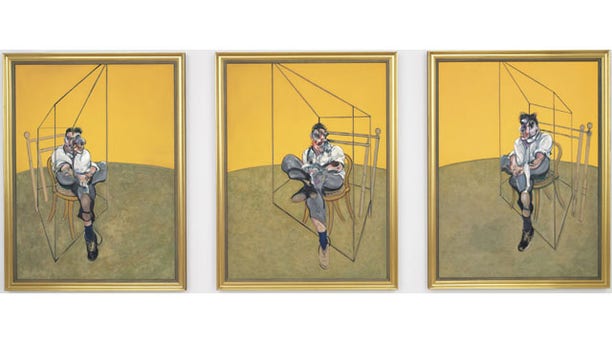 This undated photo provided by Christie's shows "Three Studies of Lucian Freud," a triptych by Francis Bacon of his friend and artist Lucian Freud. The painting was sold for $142.4 million to an unidentified buyer Tuesday, making it the most expensive painting ever sold at auction (AP Photo/Christie’s)

A 1969 painting by Francis Bacon set a world record for the most expensive artwork ever sold at auction and a sculpture by Jeff Koons broke a world auction record for a living artist at a Manhattan sale on Tuesday.

The work sold after "6 minutes of fierce bidding in the room and on the phone" to Acquavella Galleries in Manhattan, Christie's said in a statement. The price included the buyer's premium.

The price tag surpassed the nearly $120 million paid for Edvard Munch's "The Scream," which set a world record when it was sold at Sotheby's in a 2012 sale.

The previous record for Bacon's artwork sold at auction was the British artist's 1976 "Triptych." That sold for $86 million in 2008.

Also up for sale at Christie's evening auction was Koons' whimsical "Balloon Dog (Orange)," a 10-foot-tall stainless steel sculpture resembling a twisted child's party balloon. It sold for $58.4 million, a world auction record for the artist and a world auction record for a living artist, said Christie's. The auction house did not reveal the buyer.

It is one of five balloon dogs Koons has created in different colors. All are in private hands. It was sold by newsprint magnate Peter Brant to benefit his Brant Foundation Art Study in Greenwich, Conn.

Also on sale was a bright orange-yellow and white oil painting by Mark Rothko. Reminiscent of a radiating sunset, the 1957 large-scale "Untitled (No. 11)" garnered over $46 million. In May 2012, Christie's sold Rothko's "Orange, Red, Yellow" for $86.8 million, a record for any contemporary artwork at auction.

The auction also featured a masterpiece by German painter Gerhard Richter from the collection of Eric Clapton. Painted in gold and orange hues, the 1994 "Abstract Painting" sold for $20.8 million. Richter's photo-based "Cathedral Square, Milan" brought $37 million at Sotheby's in May, setting a then record for any living artist at auction.

Roy Lichtenstein's "Seductive Girl" was purchased for $31.5 million. The artist's auction record is $56 million for "Woman With Flowered Hat," sold at Christie's in May.

Christie's said the Tuesday sale brought in over $691.5 million, which it said is the highest total for any single auction in history.