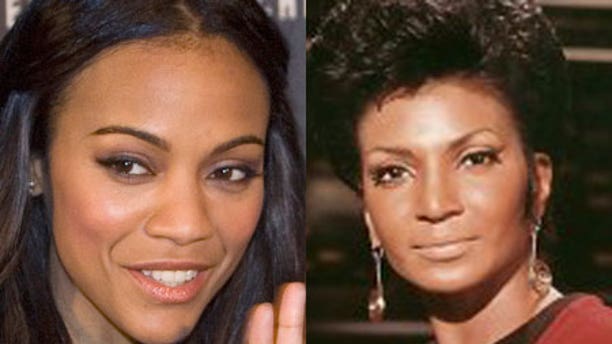 She’s about to blow up big-time as the hottie in the upcoming "Star Trek," but it turns out that Zoe Saldana (who is featured on the May cover of Women’s Health magazine which hits the stands today) has a few well, interesting underwear-related habits … Here’s an exclusive excerpt from her interview with the mag …

"I love wearing men’s clothing and underwear. I just feel so sexy in jeans and a man’s shirt. Plus I love back, red. I love solid colors that say ‘I’m here; I’m strong.’"

"Growing up, my dolls were doctors and on secret missions. I had Barbie Goes Rambo."

On her Mattel action figure as 'Star Trek' character Uhura:

On recently stepping into her third decade:

(To celebrate she threw herself a massive dinner party at her home which she shares with longtime boyfriend, Keith Britton) "I’m very accepting with my age. It’s like notches on your belt: experience, wisdom, and a different kind of beauty. There comes a day when you’ve become comfortable in your skin. But God as my witness, I am going to try to do everything I can to keep this ass together for as long as I possibly can — without going against nature."

"I have a hyper personality. I don’t draw myself a bath with candles — I don’t get it. [I feel the same way about] camping: You pack for five frickin’ hours to go to the woods and sit by a fire? We could do that in my backyard!

"I’m learning the power of going away for the weekend and keeping myself company. Sometimes I’ll drive to the airport, and four hours later I’m in Mexico. [I relax] for two days, then call everybody to say, ‘Yo, this is amazing! Please come!’"

"I won’t want to change anything in my life. Am I happy? Happiness is nothing but temporary moments here and there - and I love those. But I would be bored out of my mind if I were happy all the time."

(in "Pirates of the Caribbean: the curse of the Black Pearl") "He is the shyest person I ever met. The moment the camera is [turned] on, these characters that are within him come out and take control. Then when the director yells, ‘Cut!’ he goes back to being quiet. Very Dr. Jeckyll and Mr. Hyde."

Zoe can hang with the boys:

"But I have two sisters and a mother, and we're Latin, so we gossip."

On being sent to the Dominican Republic (from Queens) at 10 after her father's sudden death:

"My mom was scared of losing us to the streets. [But moving] made me stronger, because it takes a lot of courage to start over, especially when you’re a kid."

Working it out — Zoe takes Pilates 3 days a week:

"It’s the closest thing to dance."

"I get bored really easily. If I didn’t have a trainer to push me, I’d go walk for about 15 minutes. But I love feeling in tuned with my body and eating right."

"Sometimes I pig out on pasta, but that’s OK. (As she stares lovingly at the lobster ravioli on her plate) The next day I just eat healthy."

RELATED: Click here to read the full interview at womenshealthmag.com