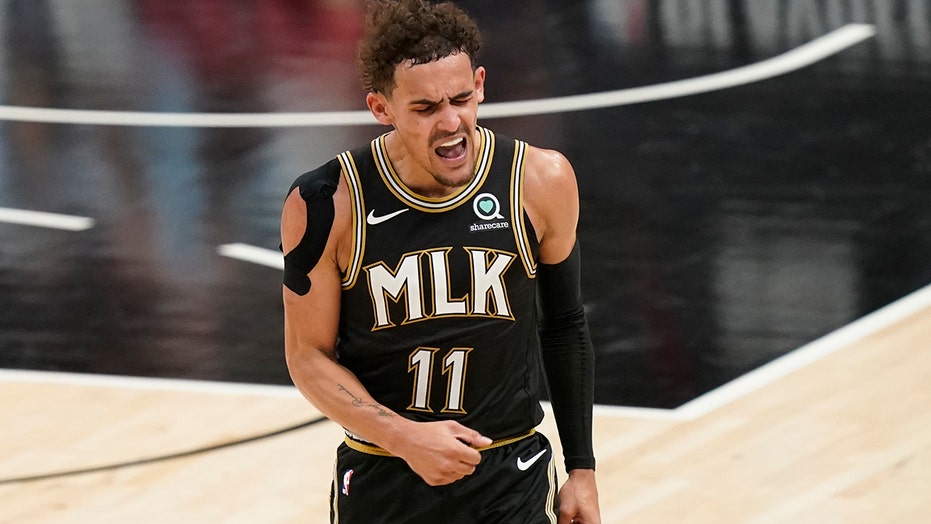 McMillan had no complaints after Young lifted the Hawks to a crucial win over top-seeded Philadelphia.

Young overcame a cold start to score 25 points, including a floater that gave Atlanta the lead with 1:17 remaining, and the Hawks rallied to beat the 76ers 103-100 on Monday night, tying the Eastern Conference semifinal at 2-2.

Young's right shoulder was taped, which McMillan saw for the first time when the point guard took off his warmups before the game.

Philly blew an 18-point lead and may have bigger concerns: Big man Joel Embiid spent time in the locker room in the second quarter and was 0-for-12 from the field in the second half.

"Even before I went back to the locker room I felt like I didn’t have it," Embiid said.

Embiid is playing with torn cartilage in his right knee.

"I guess it’s already known," Embiid said, confirming the knee was what caused him to leave the bench. "There’s no need to explain myself anymore. I’m just trying to do the best I can."

Embiid finished with 17 points and 21 rebounds.

"I’ve coached a lot of games where guys haven’t had it all night but they’re still your guys," coach Doc Rivers said, adding he would take Embiid "whether you've got it going or not."

Bogdan Bogdanovic scored 22 points for the Hawks, and John Collins had 14 points and 12 rebounds. Young made only 8 of 26 shots but had 18 assists, matching his career high.

"This team never gives up, no matter what the score is," Young said. "I love the way we fight and I’m proud of our team tonight."

Game 5 is Wednesday night in Philadelphia.

Tobias Harris scored 20 points for the Sixers and Curry had 17, missing a potential tying 3-pointer at the buzzer.

The Sixers led 60-42 late in the first half but Atlanta chipped away in the third quarter. Bogdanovic opened the final period with a 3-pointer to give Atlanta its first lead of the half, 83-82.

Young's floater with 1:17 remaining gave Atlanta a 99-98 lead, and his two free throws pushed the advantage to three.

The Hawks hung on from there, catching a break when Embiid missed a layup and the Sixers knocked the ball out of bounds with 7.8 seconds remaining.

Young missed his first five shots from the field and had his right shoulder wrapped with a heating pad when he sat on the bench early in the second quarter.

"When he took off his warmup, it was the first I saw that," McMillan said. "Obviously there’s something going on with his shoulder but he hasn’t complained. He was missing some shots that he normally makes ... but he stayed with it. He’s a tough kid."

Young's frustration showed when he complained after being called for a foul on Embiid in the second quarter, leading to a technical.

Embiid made a 3 after his time in the locker room. But he finished 4 of 20 from the floor — hardly the production the Sixers need from their star, who shot 51.3% in the regular season.

Ben Simmons was called for a flagrant-one foul after he hit Collins to stop Collins' attempt for a breakaway jam with 3:24 remaining in the third.

76ers: Harris has scored at least 20 points in seven consecutive playoff games. ... Embiid's nine first-quarter rebounds are the most for a 76ers player in any quarter of a playoff game since the 1996-97 season. ... Furkan Korkmaz had 10 points as Rivers’ choice to replace starting guard Danny Green (strained right calf).

Hawks: Committed only four turnovers. ... Clint Capela had 12 points and 13 rebounds while leading the defensive effort on Embiid.

STAND AROUND AND WATCH

Rivers said the Sixers abandoned their game plan in the second half. "We stopped passing," Rivers said. "We went back to hero basketball."

"I like what Kevin did and brought to the floor, having three ballhandlers on the floor and able to space the floor," McMillan said.