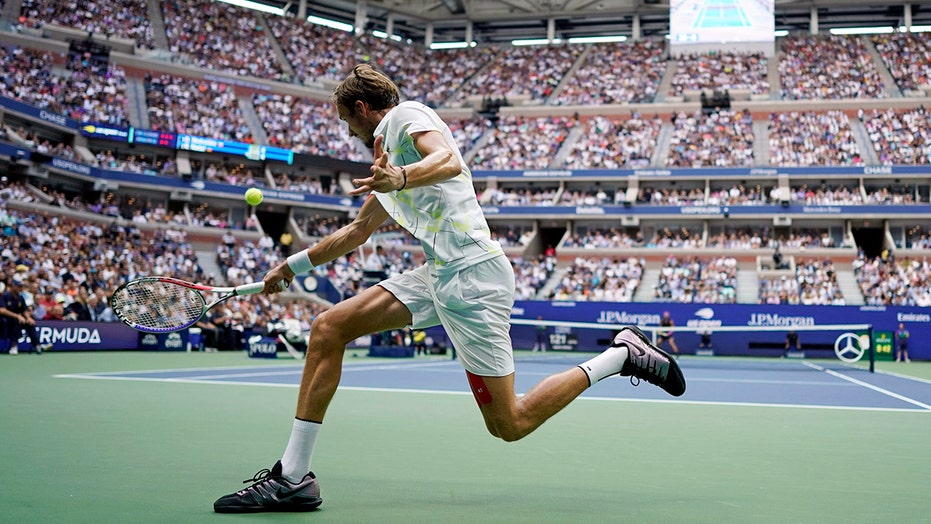 One of the enduring images of the 2019 U.S. Open simply will not -- could not -- happen at the 2020 U.S. Open: Eventual runner-up Daniil Medvedev’s heel turn, goading and taunting the folks in the stands jeering him.

By the end of the tournament, the charismatic Medvedev had won them over, receiving wildly positive support in 23,771-capacity Arthur Ashe Stadium while pushing Rafael Nadal to five sets in a rollicking final.

Neither those early boos nor late cheers will be heard this year at Flushing Meadows, where the American Grand Slam tournament begins Monday. All spectators were banned from the Billie Jean King National Tennis Center, one of several measures meant to protect players and others on-site from getting -- or spreading -- the novel coronavirus.

For everyone, really, changing the very fabric of the event.

Players can’t get a welcome boost of energy or, conversely, don’t need to fret about having people rooting against them — or simply the pressure of performing in front of thousands.

Coaches will find it easier to shout something to a player or, conversely, won’t be bothered by kibitzing from a few rows away.

Chair umpires won’t need to plead, “Quiet, please!” or delay starting the serve clock until after post-point noise dies down.

And, of course, the fans themselves don’t get to go -- while those watching on TV will find it oddly quiet after points and see large swaths of cloth stretched over empty seats.

“I absolutely love playing for people. I absolutely love when people come and enjoy a performance that myself and my opponent are able to put on for them,” said Johanna Konta, a British player seeded ninth in New York. “But obviously that’s not the reality we have right now.”

She and others got a chance to sample the silence during the Western & Southern Open, a tournament normally played in Ohio but moved to the U.S. Open’s site this year because of the pandemic.

One benefit players noticed in the week before the U.S. Open: no packs of people to deal with while navigating the tournament grounds.

On court, it was lonely.

“You can hear yourself breathe,” said Kristina Mladenovic, a four-time Grand Slam doubles champion from France. “But this is better than nothing -- than being home on the couch.”

After winning the first sanctioned ATP men’s match since March at the Western & Southern Open, Felix Auger-Aliassime jokingly sent a ball toward his coach in the stands, the way players will offer a souvenir to spectators.

“To have nobody, to have no crowd, it feels weird,” said Auger-Aliassime, a Canadian seeded 15th for the U.S. Open. “I’m not a fan of it.”

In team sports in empty arenas, such as Major League Baseball or the NBA, someone wearing the same uniform can offer a pat on the back or words of encouragement.

In tennis, players are on their own out there. No teammates and no coach standing right there on the sideline to suggest a quick adjustment or draw up a play.

“Tennis is such a mental sport, and I guess it makes it way more difficult without fans, because I just imagine playing in the fifth set on Arthur Ashe, night session, way past midnight -- and in a normal year, you get so much energy from the fans. They give you so much, all this atmosphere,” said Dominic Thiem, an Austrian seeded No. 2 in New York behind Novak Djokovic and a three-time runner-up at Grand Slam tournaments.

“And now, in an empty stadium, maybe your coach and your team is there. These are the only people,” Thiem said. “That makes it, I guess, very, very lonely. Very, very tough. And that’s going to be a very interesting thing to experience.”

It’ll be particularly unusual at Flushing Meadows, famous for its boisterous crowds who tend to make much more noise than their counterparts at the All England Club or Roland Garros, say.

Especially during the New York night sessions, where the socializing and imbibing take things to a whole other level.

“There’s a hush when you walk out on Centre Court at Wimbledon. When you walk out at the U.S. Open, there’s an explosion,” said Chris Evert, who won six of her 18 Grand Slam singles titles in New York.

“It’s going to be challenging, mentally, for the players. The ones that can focus, compartmentalize -- just manage to remember that they are playing a Grand Slam and the importance of it -- will handle it a little bit easier than those that are a little all over the place,” Evert said. “Either way, hopefully it’s a once-in-a-lifetime thing.”