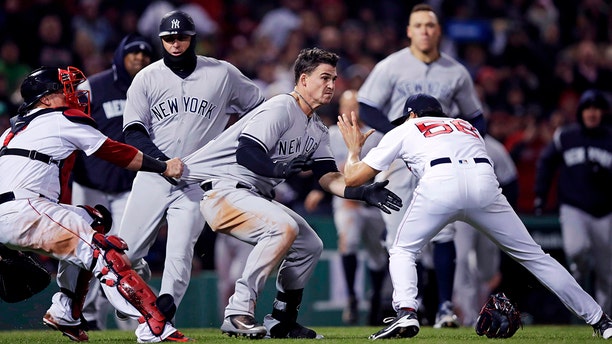 A new generation of New York Yankees and Boston Red Sox players etched a new mark in the bitter rivalry Wednesday night as a hit by pitch sparked a rambunctious brawl at Fenway Park.

Benches clear, punches thrown in Yankees-Red Sox after Tyler Austin is hit by a pitch from Joe Kelly. pic.twitter.com/wvqoak8QMV

Austin slammed his bat down and charged the mound, sparking a fury of punches and pushes from both sides of the field.

Austin and Kelly were both ejected from the game. Yankees third-base coach Phil Nevin and reliever Tommy Kahnle were also tossed. According to MLB.com, Nevin said he had been yelling toward the Red Sox’s dugout and Kahnle said he got angry after he was pushed by an umpire. 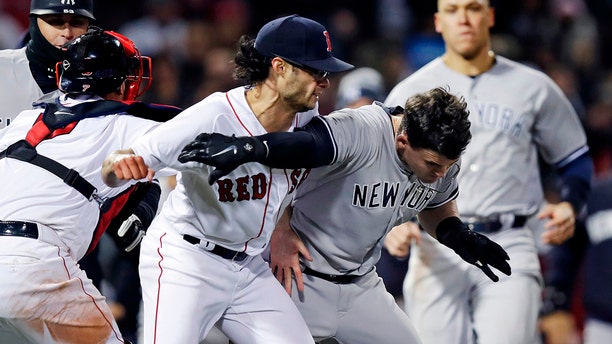 New York Yankees' Tyler Austin, right, scuffles with Boston Red Sox relief pitcher Joe Kelly, after being hit by a pitch during the seventh inning of a baseball game at Fenway Park in Boston. (AP)

Kelly said after the game that the ball got away from him, but things got feisty in the third inning when Austin slid spikes first into second baseman Brock Holt – which cleared benches the first time.

Austin said he felt like the pitch was intentional, according to MLB.com.

"I felt like that it was intentional and I didn't want to let anybody push myself around or do anything like that," Austin said. "That's why I went out there."

Kelly had red marks around his neck after the skirmish and left the field with a torn jersey. 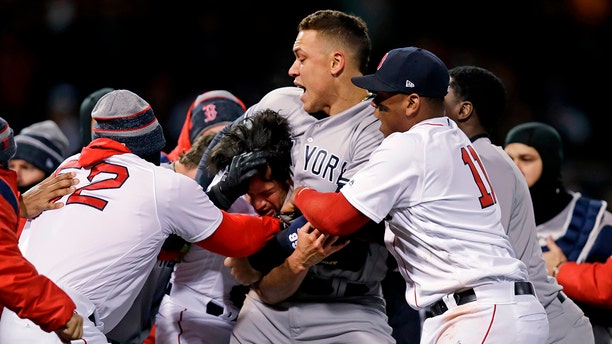 The Yankees and Red Sox play their series finale Thursday night, and Yankees manager Aaron Boone believes the theatrics will be behind everyone.

"I think it's probably over with," Boone said. "Hopefully put this to bed."

The brawl in Boston was the second big fight of the day in baseball.

"It made me wonder, too, if they were in their clubhouse watching the Padre-Rockie brawl and planted the seed for them and led them to think that that's why they should do," Yankees general manager Brian Cashman said.

The Austin-Kelly fight follows some of the more infamous brawls in the storied rivalry from Alex Rodriguez and Jason Varitek to Don Zimmer and Pedro Martinez to Lou Pinella and Carlton Fisk.