Yankees buy back YES network from Disney in $3.5B deal 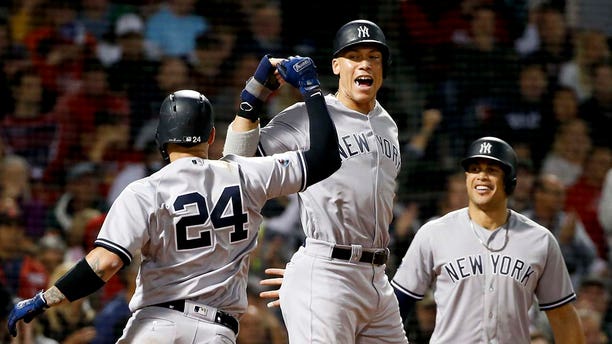 The New York Yankees have reached an agreement to repurchase the Yankees Entertainment Sports network (YES) from Disney at a price of $3.4 billion in a deal that is expected to close on Friday, FOX Business has learned.

The sale of YES will mark the first of the nearly two-dozen Fox Regional Sports Networks, currently held by Disney, to be sold, according to people with direct knowledge of the matter.

Under the terms of the deal, the Yankees will be the majority owner of the YES network, which airs the Yankees games as well as games of other New York teams including the Brooklyn Nets and New York City Football Club (NYCFC), and will partner with other companies including private equity outfit Blackstone Group, Sinclair Broadcast Group, which owns local TV stations across the country, and online retailing giant Amazon, according to people with direct knowledge of the matter.

Blackstone, Sinclair and Amazon will hold the next largest ownership stakes in YES, and despite published reports, Amazon's financial interest is network lower in the buyout group than both the Yankees and another financial backer, according to people with direct knowledge of the matter.

But Amazon's participation along with Sinclair's is key: It underscores to potential to leverage the broadcasting of Yankees games to both local markets controlled by Sinclair and through Amazon's streaming service, these people say. For now, Amazon will only be able to stream Yankee games in the team's designated market.

21st Century Fox had owned 80 percent of YES, while the Yankees held a 20 percent stake. But the Yankees opted to buy back the station following Disney’s $71.3 billion purchase of Fox's entertainment assets that included the RSNs and is scheduled to close over the next month. As part of the new deal, the Yankees' stake will grow to closer to 30 percent, these people say.

Disney must sell the RSNs to meet federal antitrust requirements and the bidding on the other Fox regional sports network continues. The RSNs broadcast various sports programming through regional cable carriers around the country

YES is considered the crown jewel of the 22 RSNs and for that reason, the Yankees were able to leverage the team's nationally recognized brand to attract numerous investors. The $3.4 billion valuation of YES is higher than the value of most sports franchises; the Yankees, one of sports most profitable teams, have an estimated value of around $4 billion.

The diverse group of new owners foreshadows some of the major changes that are transforming sports broadcasting. Many consumers are no longer viewing sports programming through traditional cable and are instead watching sports over the internet or on mobile devices.

While Sinclair might someday broadcast Yankees games through its various stations across the country, the Yankees are hoping Amazon will at some point stream some of the games to a national audience, though details of how that will occur are unclear.

As for the other Fox RSNs, the bidding has been lackluster so far though a deal could be announced shortly now that the YES transaction is completed, these people add. Disney's bankers at Allen & Co. and JP Morgan initially sought as much as $20 billion for the assets.

Bankers began the auction in late November and hoped to have had the auction completed by mid-January amid speculation that interested buyers included cash-rich tech firms like online retailer Amazon. But Amazon's interest in all the RSNs never materialized at least so far. Other bidders began to run their own financial analysis showing that cord cutting among consumers of sports programming will hurt the future value of the properties. Meanwhile, bankers confused prospective buyers by suggesting the new owners would also own the crucial digital rights of baseball games when those rights belong to the league and the teams.

As a result, the final price tag of the RSNs is likely to fall below the $20 billion initially sought.

Major League Baseball Commissioner Rob Manfred has taken an acute interest in the RSN sale out of fear that amid the declining buyer interest, smaller market baseball teams would be put at a marketing and distribution disadvantage if the buyer was too highly leveraged to invest in the properties. That's why MLB has placed a bid for the RSNs valued at around $10 billion.

Others bidders for the remaining RSNs include Sinclair, as well as cable impresario John Malone's Liberty Media, and most recently an investment group led by hip-hop star Ice Cube. Arte Moreno, the owner of the Los Angeles Angels, has expressed his interest in buy a handful of the west coast RSNs, as Fox Business was first to report.